Kuujjuaq receives runway improvements, but gravel is a problem for projects in two communities 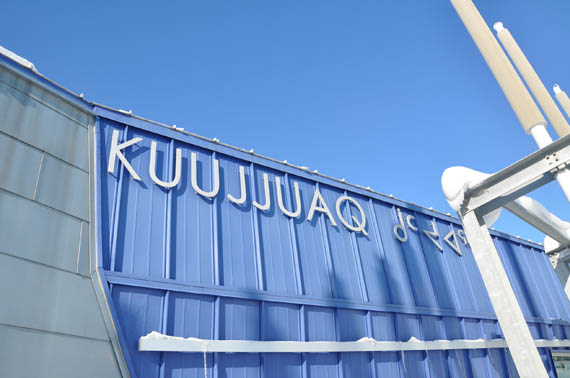 This year, Kuujjuaq’s airport runway received a strip of new paving, resulting in smoother takeoffs and landings. A full runway repaving will be done in 2020. (Photo by Sarah Rogers)

Not all airport projects planned for this year could be completed, but Kuujjuaq for one is seeing smoother takeoffs and landings.

The centre of Kuujjuaq’s airport landing strip was ground down and repaved this year by Transport Canada.

“There were some major cracks in the runway. Transport Canada came in and ground down the runway in places where it was peeling and put a sub-base in and paved over that,” he said. The new paving covers just 23 metres at the centre of the runway.

“All of that is just a patch this year. Next year they’re going in and grinding down the whole runway, so we’ll have a whole new runway,” he said.

Kuujjuaq’s is the only airport in the region under federal jurisdiction. The smaller communities’ airports are overseen by the Province of Quebec.

A new access road to Tasiujaq’s airport was completed in October by the KRG’s department of transportation. It is unpaved, Darling said, which means it will be easier to fix compared to a paved road.

“If it starts to get hilly, we can go in and level it off,” he said.

Runway slope embankments were also fixed in Tasiujaq where previous work had left too great a slope.

Quaqtaq’s airport is supposed to see new fencing in place this month provided by Quebec’s Ministry of Transportation (MTQ), but Darling questioned whether that would be possible after the snow falls.

In Kuujjuaraapik, a new maintenance garage is little more than a steel frame, said Darling. And the community’s airfield surface will be completed next summer rather than this year.

This is because the MTQ ordered insufficient gravel.

In Salluit, problems with the quality of the gravel delayed completion of a new terminal building to next year, Darling said.

“The aggregate, gravel, crushed for that was too high in calcium and had other issues, so they couldn’t continue with building until they get new gravel,” said Darling.

“There’s certainly some consistency in how they’re not completing the projects and why,” Darling said.

He said the KRG has hired a coordinator of infrastructure for its transportation department, which has significantly improved the way they work with the provincial transportation ministry.

Nonetheless, he said, the KRG needs to be more involved in the process of transportation infrastructure improvements to provide quality assurance.