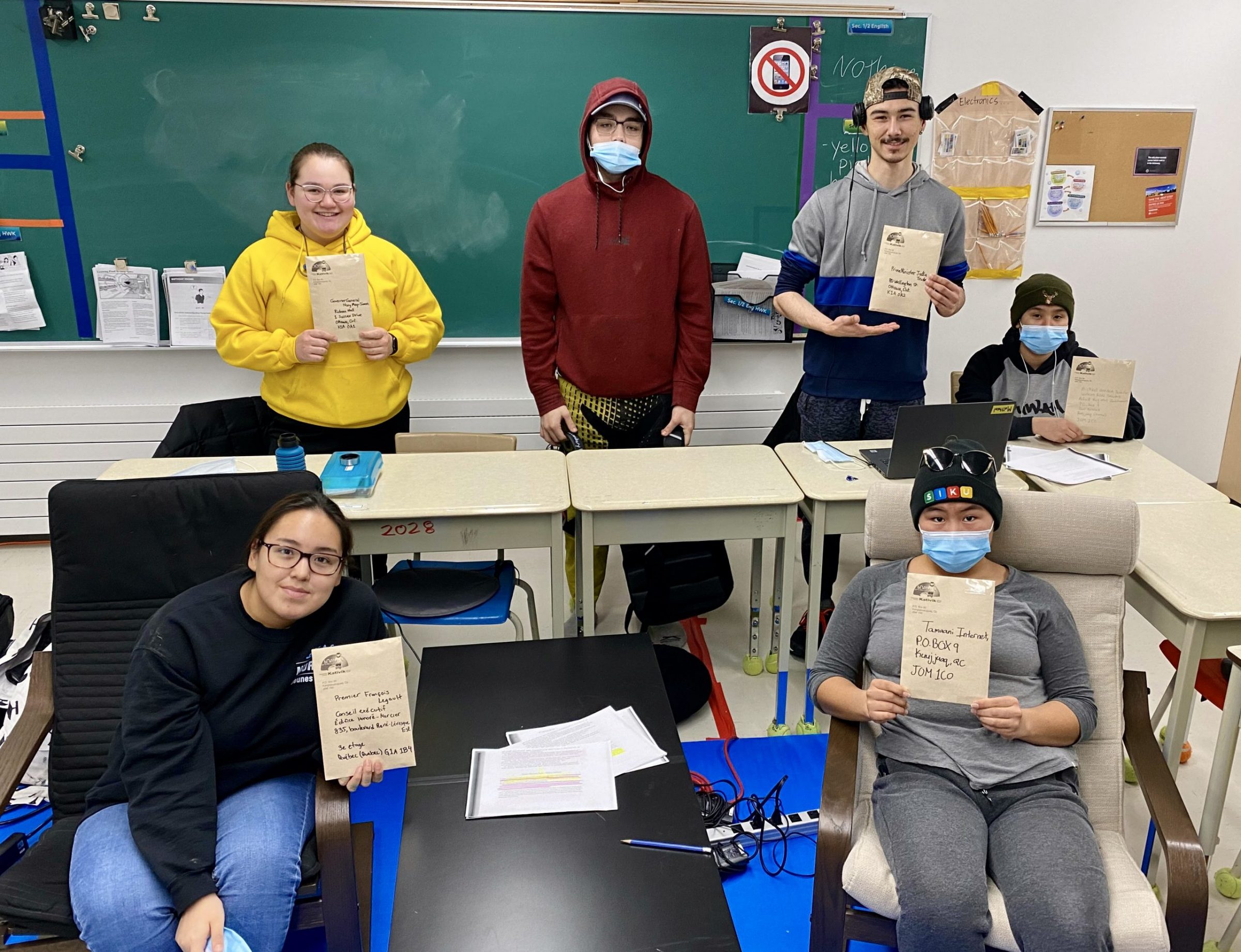 When Nunatsiaq News recently reached the students at Ulluriaq School in Kangiqsualujjuaq, Nunavik, over Zoom, it only took a few minutes until the call dropped.

“Hello? Can you hear me? I think we’re losing you a little bit,” said Gillian Warner, an English teacher at Ulluriaq, her voice breaking up from the poor audio connection.

Warner’s fourth and fifth level students are used to the inadequate and unreliable internet in the remote northern Quebec village on the east coast of Ungava Bay. So used to it, in fact, that they’ve decided to petition the regional government and politicians to do something about it.

Warner has lived in Kangiqsualujjuaq for almost 20 years. When she begins her Monday classes by asking her students what they did on the weekend, she said she’ll often hear back, “nothing.”

“A lot of the time they were saying they’re just so down,” Warner said, when Nunatsiaq News reached her by phone. “Without the internet, and the fact that many of the facilities are closed, there’s not as many activities.… they have nothing to do and it’s quite depressing.”

“We’re very tired of the slow internet,” said 17-year-old Kathy Snowball, one of seven students in Warner’s class. “Trying to research basic information has very long delays and slows down our education,” she said.

At Ulluriaq, classes will have to take turns being on the internet for assignments or lessons because the bandwidth is too weak to sustain everyone at the same time, if at all, Warner explained.

And it’s not just the students’ education that’s been impacted by the region’s poor internet connectivity.

Susiejane Karpik, 17, works at Canada Post and said she often struggles to look packages up in the system because of slow bandwidth. Another common issue is paying by card — students say debit machines at shops often can’t connect to the server, and online shopping is very difficult.

Matthew Etok, 18, who has been trying unsuccessfully for weeks to research a snowmobile he wants to buy online, said the weak internet in Nunavik also impacts residents’ mental and physical health.

“We want to have the same resources available as our fellow Canadians. Being able to get online counselling or counselling with a doctor online without having to travel to another location just for a full diagnosis,” he said. 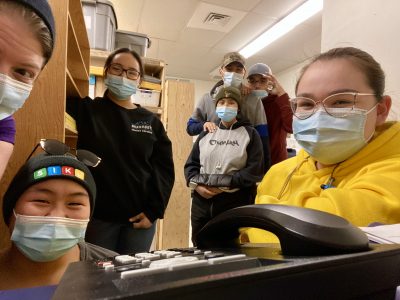 When Nunatsiaq News tried to reach the secondary English students at Ulluriaq School in Kangiqsualujjuaq, Nunavik, it took only a few minutes for the Zoom call to drop out, something that happens very often said teacher Gillian Warner (far left). Students instead continued the interview by phone. From left to right: Elena Keelan, Jocelyn Etok, Susiejane Karpik, Matthew Etok, Willis Emudluk-May, and Kathy Snowball. Not pictured is fellow student Dalacia Etok. (Photo courtesy of Gillian Warner)

The Kativik Regional Government is currently working to deliver high-speed internet to some Nunavik communities by 2023, and a few fibre optic lines have been laid along the Hudson Bay coastline.

However, public health measures requiring people to stay home during the pandemic have quickly compounded the issue of poor bandwidth, Warner said, and she and her students worry if the internet promised will actually be enough for her community.

“It’s really in the last six months it’s gone downhill. Most of us have done CRTC complaints, but nothing’s ever really changing. We’re not getting any updates on what’s happening,” Warner said. “That’s really been an issue that keeps getting worse and never better.”

After repeated discussions with her students about the impacts of poor internet on their lives, Warner said her class decided they wanted to do something about it.

Jocelyn Etok, 16, said the class drew inspiration from Andrea Brazeau, a former student of Ulluriaq who is now an elementary school teacher in Kangiqsualujjuaq.

When Brazeau was attending teacher’s college at McGill University in Montreal, she wrote an open letter to Premier François Legault demanding more be done to help get her home community online.

Students said they followed Brazeau’s lead, deciding to print some signature pages and dropping them off at government buildings and at businesses throughout the town.

After two weeks, the students had collected 301 signatures from residents of the village whose population is less than 1,000.

The students have also finished writing letters which outline their requests. They’re asking officials to do more to ensure that reliable high-speed bandwidth will come sooner to their community.

They’re also asking the government for refunds on their internet bills.

“Sometimes it just does not work, and yet we still pay the full amount each month. It doesn’t even reach 1.5 megabytes per second speed, and we don’t get rebates or a discount for the days when the internet was not working,” Snowball said.

In a bit of a strategic play, Simon’s letter has been written in Inuktitut, thanks to Snowball’s translation skills.

“That might be a way to make sure she reads it, because then it won’t just be her secretary reading it,” Warner said with a laugh.

Warner said the goal of the petition is not just to pressure officials to do more to improve internet access, but also to teach her students how to get involved with activism. She said she’s impressed by the passion of her students, and how their letters highlight how poor internet impacts educational, health and social services in remote communities like theirs.

“There were different things that they kind of connected with as reasons to put in the letter. That was so awesome. It was fun to see that depth of thinking that they were getting into,” she said.

The students said they’ve learned a lot about what it takes to advocate for their community as well.

“We’ve learned that it just doesn’t happen in one day. It takes time to make it actually happen,” Snowball said of the group’s goal of better internet access. “It takes a lot of work.”