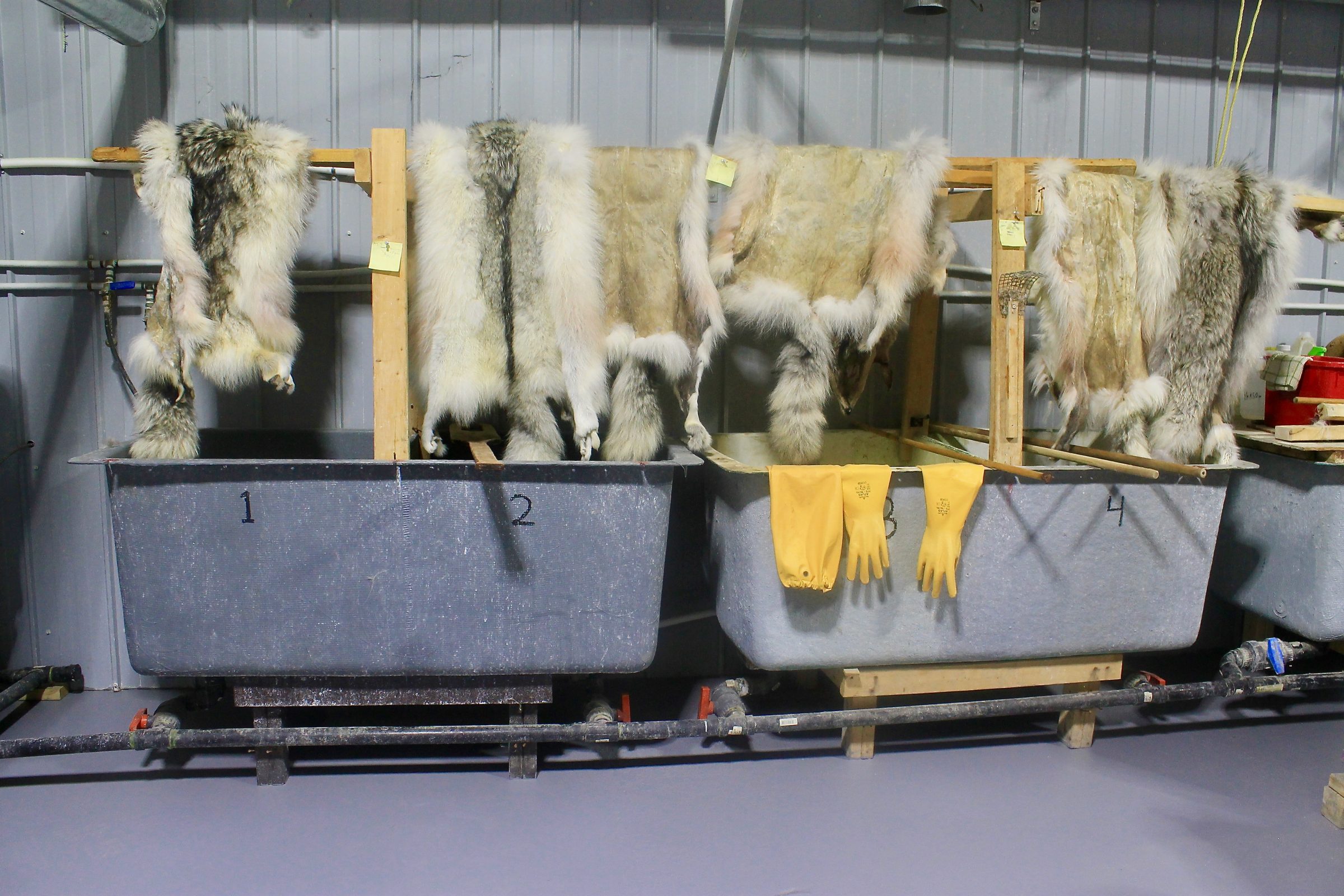 The tannery in Kuujjuaq, operated by Nunavik Furs, processes between 500 and 600 pelts per year. (Photo by Elaine Anselmi)

KUUJJUAQ—The smell of the hides isn’t as strong as you’d think, as you walk into Kuujjuaq’s tannery.

Fox and seal pelts are strung up in bunches, and a few polar bear pelts are hung over a loft railing in the Quonset hut.

This is the only Inuit-owned tannery, and a rarity in Arctic regions, said Nathan Cohen-Fournier.

He’s the head of economic development for Makivik Corporation, which operates Nunavik Furs and its bespoke tannery.

“We consider it to be a kind of essential service for hunters and seamstresses,” he said.

The tannery is used both for hides purchased by Nunavik Furs to be sold at auction and in their shop, and for hunters and trappers who want their pelts tanned.

That means soaking the pelt in an acidic solution, spinning it in a large drum with sawdust to absorb the excess liquid and oiling it—in simplified terms.

All of this happens behind the doors of the shop on Stewart Lake Road in Kuujjuaq. 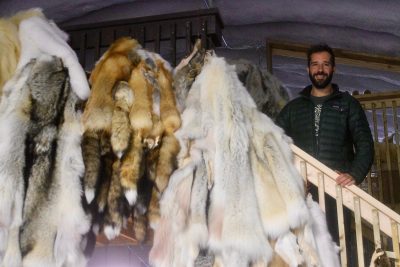 Nathan Cohen-Fournier is the head of economic development for Makivik Corporation, which operates Nunavik Furs. (Photo by Elaine Anselmi)

At the front of the building, furs up for sale are arranged on lines. Most of them are natural colours, but dying is something Cohen-Fournier said they want to do more of, at the request of seamstresses looking for materials to work with.

Nunavik Furs buys pelts from hunters and trappers, through the Hunter Support Program in each community, at a higher, stable rate, rather than the fluctuating market rate they’d fetch at auction.

Right now, the majority of the stock comes from Kuujjuaq, Inukjuak, Tasiujaq and Kuujjuaraapik.

But there are some ambitious plans at Nunavik Furs both to grow their presence and reach across Nunavik, and to dip into southern markets.

Earlier in September, Cohen-Fournier and others with Nunavik Furs were in the Lac Saint-Jean area meeting with the team at Bilodeau Canada.

Owned by Mario Bilodeau, the company carries out all aspects of fur processing and finishing. They specialize in tanning and taxidermy, and produce high-end clothing using Quebec fur.

Talks are still preliminary, Cohen-Fournier said, but his hope is to partner with a company like Bilodeau to develop end products like their boots, hats and parkas, with fur from Nunavik.

“They’re at a bigger scale, so we have to be conscious of that,” said Cohen-Fournier.

Nunavik Furs sees between 500 and 600 furs per year, he said. A commercial tannery would handle tens of thousands of furs.

But there could still be an opportunity here for Nunavik Furs, and Cohen-Fournier said the team at Bilodeau is interested in partnering with an Inuit organization.

“I think we’d be looking at more of a high-end, specialty line,” Cohen-Fournier said.

For example, he pointed to Canada Goose’s Project Atigi line, developed by Inuit designers from across Inuit Nunangat, in partnership with Inuit Tapiriit Kanatami. All proceeds from the line go to ITK.

But in the short term, Cohen-Fournier said they are working on proving the tannery can sustain itself.

With a full-time staff of two and another two part-timers, and between 100 and 150 hunters using its services, it is still heavily subsidized.

“It may not ever be a huge money-maker, that’s not the idea, but to cover the costs,” said Cohen-Fournier.

With a wealth of hunters and seamstresses across Nunavik, there is potential to develop products that can be exported from the region using a resource that’s renewable when used properly, he added.