‘We need to be more open and more supportive,’ says project lead for Tusaajuit 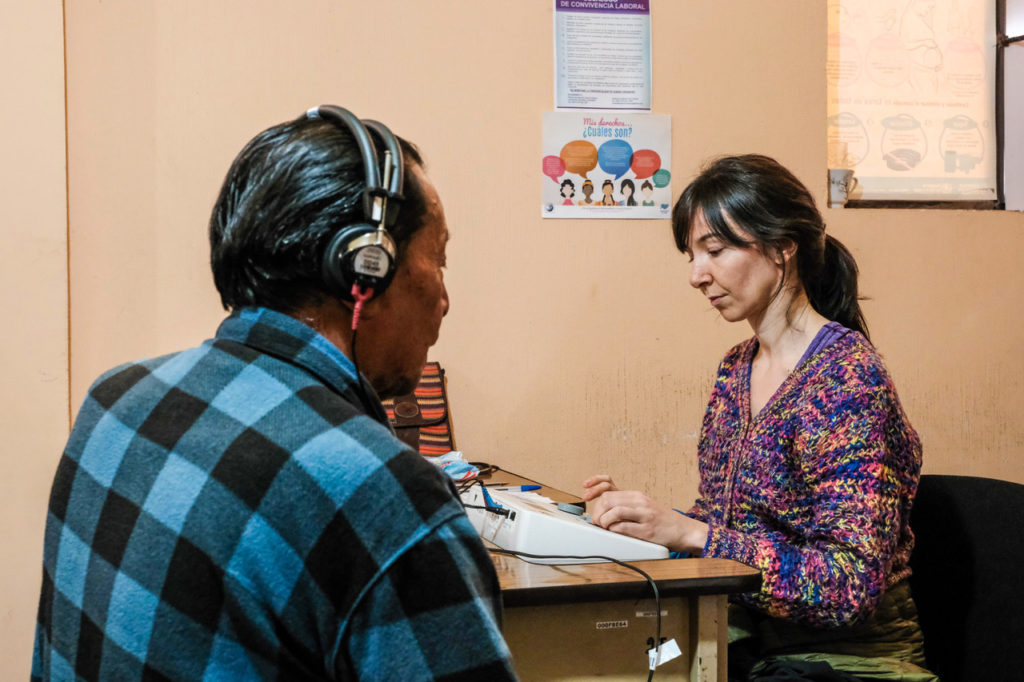 Tusaajuit team member Patricia Duchesneau conducts a hearing test. Tusaajuit, a new initiative that hopes to create awareness and support around hearing loss in Nunavik, won $500,000 from the Arctic Inspiration Prize on Feb. 19 to help launch its initiative. (Photo courtesy of Tusaajuit)

A new Nunavik organization hopes to get people listening, and learning about, hearing loss.

Tusaajuit aims to better treat, prevent and raise awareness around the high rates of hearing loss among Nunavimmiut. It’s a collaborative project developed by staff at Nunavik’s school board and its regional health agency.

Tusaajuit translates as “people who are listening.”

And judges at this year’s Arctic Inspiration Prize apparently were, when they awarded $500,000 to the start-up organization last week.

“We were really surprised; we were ecstatic,” said Tunu Napartuk, a project lead who also heads Kativik Ilisarniliriniq’s complementary and compassionate services department.

“We weren’t sure what chances we had,” said Napartuk.

A Nunavik Inuit Health Survey in 2004 found that a quarter of Nunavik adults have hearing loss in both ears, with men more than three times more likely than women to be affected.

A 2014 study by Nunavik audiologists found that 20 per cent of students in the region have hearing loss in one or both ears.

In Nunavik, hearing loss tends to be caused by ear infections, as well as exposure to loud noise, such as shotguns and snowmobiles.

The issue is well-documented; the Nunavik Regional Board of Health and Social Services has long employed audiologists, who regularly visit Nunavik’s schools.

But hearing loss is not so well understood or accepted among Nunavimmiut, Napartuk said, and that’s where Tusaajuit hopes to step in.

The new organization isn’t trying to reinvent work already being done, but rather act as a bridge between Nunavik’s health and education organizations, with the goal of creating awareness around hearing loss.

Audiologists already test kindergarten students in schools across the region, to try to identify hearing loss early on. And most kindergarten to Grade 2 classrooms are outfitted with audio systems to help amplify a teacher’s speaking voice.

But communicating the challenges faced by people living with hearing loss is more difficult, Napartuk said, as is building support and acceptance around treatment, such as the use of hearing aids.

“If a child has even a mild to moderate hearing loss, their ability to learn can be affected,” he said.

“I think the prevalence is much wider and we need to be more open and more supportive.”

With the Arctic Inspiration Prize under its belt, Tusaajuit now has the support to get started, Napartuk said, and one of its first tasks will be to hire a co-ordinator.

The organization then hopes to create a multi-media campaign to gets it messaging out to the region.

“There was a void,” he said. “I think this will help normalize hearing loss.”