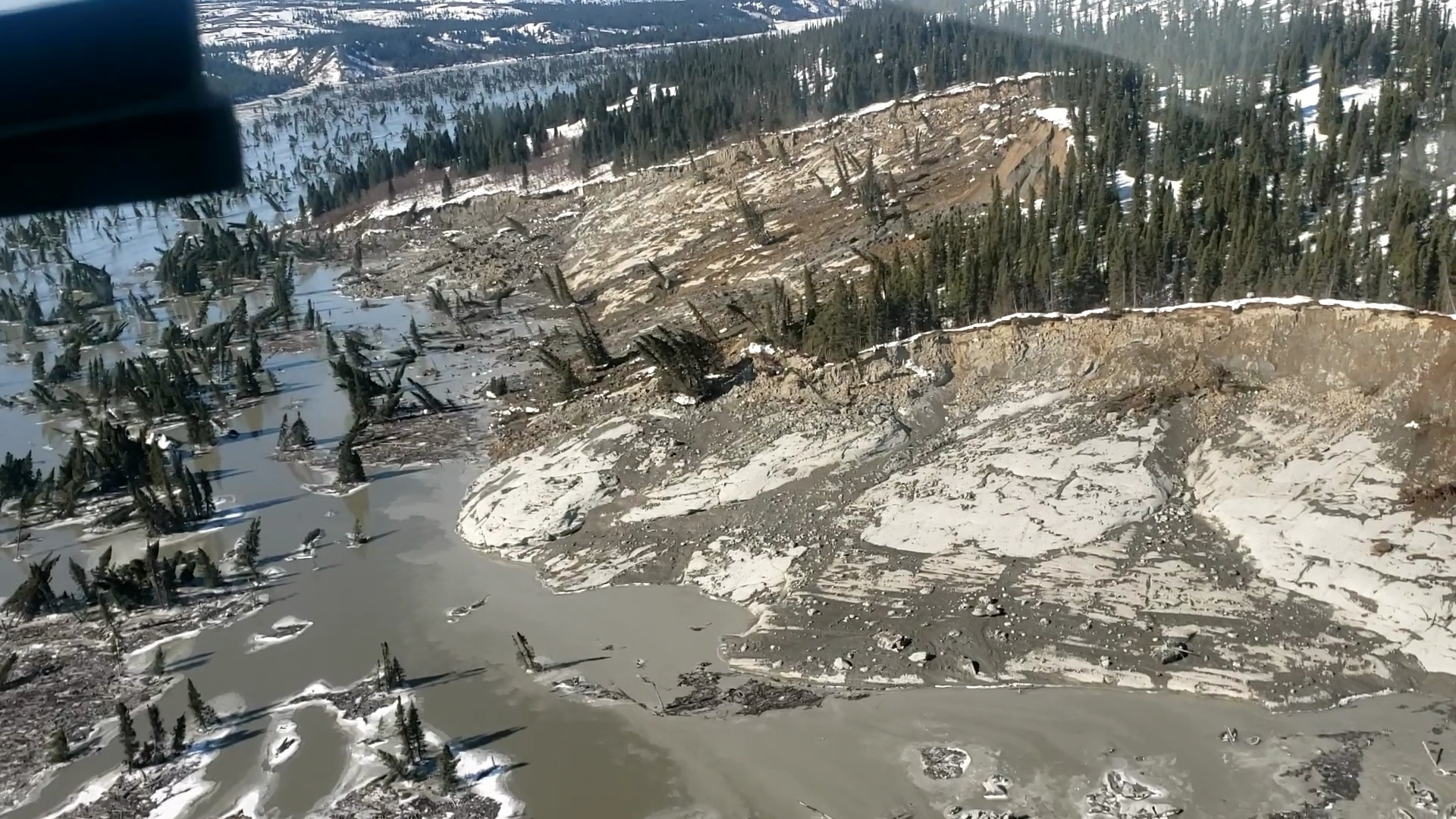 Aerial footage taken by the municipalities of Kuujjuaraapik and Whapmagoostui show the extent of the April 22 landslide, which is estimated to have dumped 45 million cubic metres of debris into the Great Whale River. (Photo courtesy of KRG)

Last week’s major landslide in Nunavik has been confirmed as the second largest ever seen in Quebec, according to the Kativik Regional Government.

The landslide happened on April 22 along the shores of the Great Whale River, roughly eight kilometres upstream from the community of Kuujjuaraapik, which sits adjacent to Whapmagoostui Cree First Nation.

Following aerial surveys of the region this week, officials now say the landslide spanned an area 1.8 kilometres long and 500 metres wide, dumping 45 million cubic metres of debris into the river.

The largest landslide in the province was recorded in Portneuf, near Quebec City, in April 1894. Four people were killed in the incident.

Officials say there is no danger to the communities of Kuujjuaraapik and Whapmagoostui in relation to last month’s landslide.

“There is no need of immediate concern as long as the river is flowing and we continue to monitor the ice,” said local Cree elder George Kawapit in a Thursday news release from the Kativik Regional Government.

The region is susceptible to landslides due to its clay soil deposits, which create “extra sensitive terrain,” explained Laval University geologist Michel Allard, who has done extensive research of landforms and permafrost in the area.

“We could say that there are regions that are more exposed than others, because of the presence of this kind of soil,” Allard said.

“Many of these landslides happen in the springtime, as the snow melts. The structure of the clay breaks.”

The cliffs on either side of the river rise about 120 feet. Because of the steep slope, Allard said the spring melt creates water pressure that pushes the clay down.

Despite initial reports of two separate landslides last week, Allard said it was in fact one major landslide that happened in two stages.

There have not been any more landslides since April 22.

“The worst is over,” said Denis Demers, a landslide expert who works for Quebec’s Ministry of Transportation.

“The major part of the debris from the landslide has spilled into the river. It may take months if not years for the river to return to its normal course.”

The river is still frozen, so much of that debris is sitting on the ice.

After break-up, Kativik and Quebec government officials will help monitor how much of the sediment flows to Hudson Bay.

In its news release, the Kativik government said the height of the slope along the river closer to both Kuujjuaraapik and Whapmagoostui is too low for soil erosion from a landslide to cause significant damage to the communities.

Both municipalities have committed to constructing a “safety buffer zone” around the landslide area to warn residents of the potential dangers of travelling through the area.