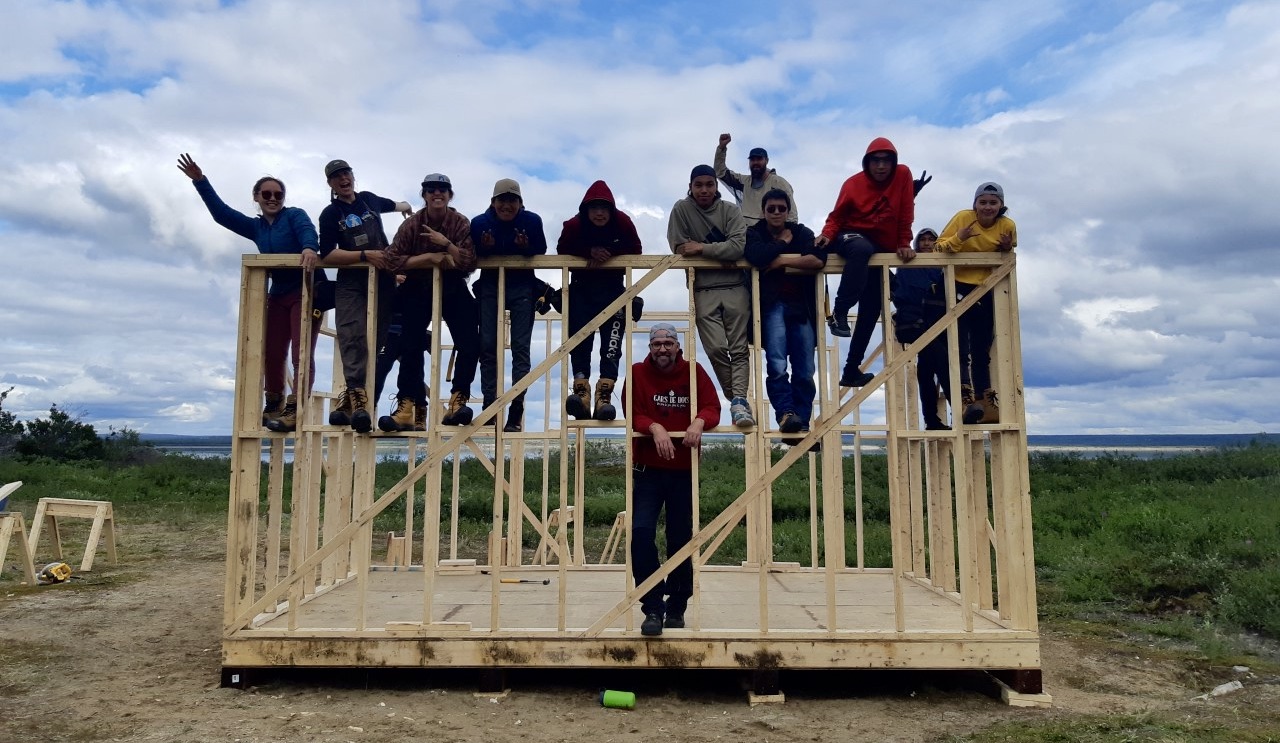 Participants in and coordinators of Ikaartuit, a program in the Nunavik outdoor education organization Jeunes Karibus, work on a cabin construction project that teaches carpentry skills south of Kuujjuaq in August 2021. Jeunes Karibus is a Nunavik outdoor education organization that encourages youth to work on personal and social skills while developing a healthy lifestyle. (Photo courtesy of Hugo Dufresne)

When Joshua Kettler, 20, was a 14-year-old high school student in Umiujaq, Que., he worked hard to keep his grades up.

Doing well in school was important to him, he said, but not just so that he could bring home a good report card.

As a participant in the Jeunes Karibus outdoor adventure organization, getting good grades meant Kettler could go on weekend trips and expeditions in the Nunavik wilderness.

“That was a big motivation for me,” he said.

For Inuit youth in Nunavik wanting to learn more about living on the land, joining Jeunes Karibus has been a unique opportunity to experience life in the great outdoors since it was founded from a pilot project in 2014.

In the wake of the pandemic, however, some innovations have helped Jeunes Karibus grow into more than just an outdoor activity program for teens.

Hugo Dufresne is the general manager of Jeunes Karibus, having recently taken over from long-time manager and founder Valérie Raymond, who still leads the board of directors.

“We were, at the beginning, an expedition program, and now we’re an outdoor intervention program,” Dufresne said of the organization’s expanded focus.

In 2014, Jeunes Karibus ran a program called Nurrait, which helped students develop health, personal and social skills through skiing, kayaking and camping, and connected youth with community elders who shared their knowledge of the land.

Then, it added Tuttuit, a professional development program, which allowed students who aged out of Nurrait to continue learning through internship and employment opportunities as assistant team leaders for expeditions.

Since 2020, however, Jeunes Karibus has added two more programs to reach more youth in Nunavik, specifically targeting emotional well-being and issues of isolation during the pandemic.

The new Ikaartuit program focuses on self-awareness by helping participants identify their strengths and understand their emotions through self-regulation and personal goal setting.

“It’s designed for youth who are not attending school or with more, we say, psychosocial vulnerabilities, with a bit less stability in their life,” Dufresne said.

The Ikaartuit program enlists the help of a professional social worker to work with youth experiencing personal challenges, and offers intensive programming like a cabin construction project that allows participants to develop carpentry skills they can apply in their professional life, Dufresne said.

“Basically there will be interventions with the youth to the outdoors,” he said.

“They’re going to live a challenge outdoors, and afterwards they are going to reflect about it and grow from the challenges they’ve been through during the programming.”

Yet pandemic restrictions over the past two years forced some adjustments to how the outdoor Nurrait, Tuttuit and Ikaartuit programs are run, Dufresne said. Just as participants have to learn new skills to thrive in the outdoors, Jeunes Karibus organizers had to find new ways to deliver their programming.

Instead of all participants gathering for a final expedition, for example, program coordinators staged community-specific expeditions to keep bubbles small.

Those efforts meant Jeunes Karibus was able to continue its programming in all 14 northern communities it operates in, he said.

It also meant organizers could launch an online program, offering 30 workshop activities that can be done individually, indoors and outdoors.

It’s an approach that Kettler is happy to see the organization take on. He sees himself as a good representation of what the program and its specialized activities can do for participants.

Now an adult and the father of two young children, Kettler is still involved with Jeunes Karibus. Having completed the Nurrait and Tuttuit programs, he now sits on the board of directors.

“I would like youth to be more involved and to experience the program as much as possible,” he said.

“It’s a very good program for the youth, since most of them don’t get a chance to go out on the land, and I find that the program does a lot of stuff to keep our culture strong.”