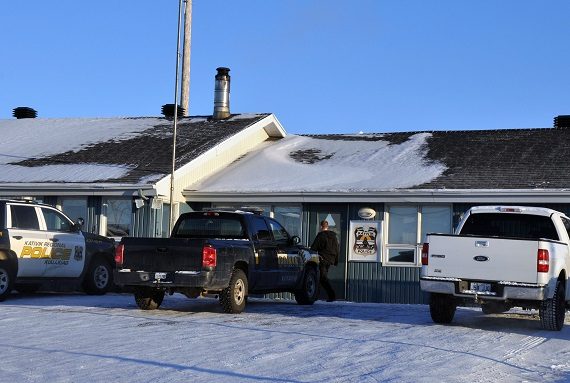 The Kativik Regional Police Force has asked the Quebec government for video-conferencing facilities in two Nunavik communities, Puvirnituq and Kuujjuaq, pictured here, to help cut down on the transfer of detainees to southern prisons. (PHOTO BY SARAH ROGERS)

KUUJJUAQ—The Kativik Regional Police Force has asked the Quebec government for video-conferencing facilities in two Nunavik communities to help cut down on the transfer of detainees to southern prisons.

The KRPF says it has been in discussions with provincial justice and correction officials on how to ease the costly and time-consuming movement of detainees to and from the region.

With no prison or judge in the region, Nunavimmiut who are arrested are kept in a police station cell until they can make a first court appearance by telephone.

But if they are denied release, detainees must travel south for their bail hearing, accompanied by police officers.

A 2016 report by Quebec’s ombudsman found that up to 14 days can pass between a prisoner’s arrest and their arrival at their hearing. That includes a flight to Montreal before detainees are driven to the Amos detention facility.

To address that, the KRPF first requested a chartered air link that could fly detainees from the region directly to Amos.

Since September, KRPF police chief Jean-Pierre Larose said he has also been in regular discussions with justice officials about implementing video conferencing in both Puvirnituq and Kuujjuaq.

“We have submitted to the government a clear position on video appearances,” Larose told Kativik Regional Government council meetings on Thursday, Nov. 29.

“We believe at least 30 per cent of detainees will be able to stay in the region and liberated. We think it’s a good position.”

The transport of detainees is a major drain on the force’s manpower and budget, costing the KRPF roughly $3.5 million a year.

That’s not to mention the violations of offenders’ rights to a bail hearing within three days of their first appearance, an issue that prompted a recent application for a class action suit on behalf of Nunavimmiut against the province.

“We realized in our research that it wouldn’t be a good idea to implement video conferencing in all of our [police] stations,” Larose said.

“It would require a lot of police staff; it could create further delays [and] would require detainees to be guarded over a longer period.”

That’s why Larose has proposed video conferencing in Puvirnituq and Kuujjuaq, the two communities that host the largest number of mobile court sessions in Nunavik each year, including corrections workers who could guard those detainees.

For its part, Quebec’s Ministry of Public Security told Nunatsiaq News in an email that the groups are “currently analyzing the various options and their feasibility, both legally and operationally.”

But the ministry has yet to make any financial commitment.

The Quebec ombudsman’s report has prompted broader discussions on how to improve justice services in Nunavik, including the province’s commitment to construct new police and court facilities.

That news was welcome, but Larose said that bureaucratic delays postponed planning on that project.

The region already missed out on ordering materials that could have been shipped up during this year’s sealift season, and must now wait for late next year to begin construction.