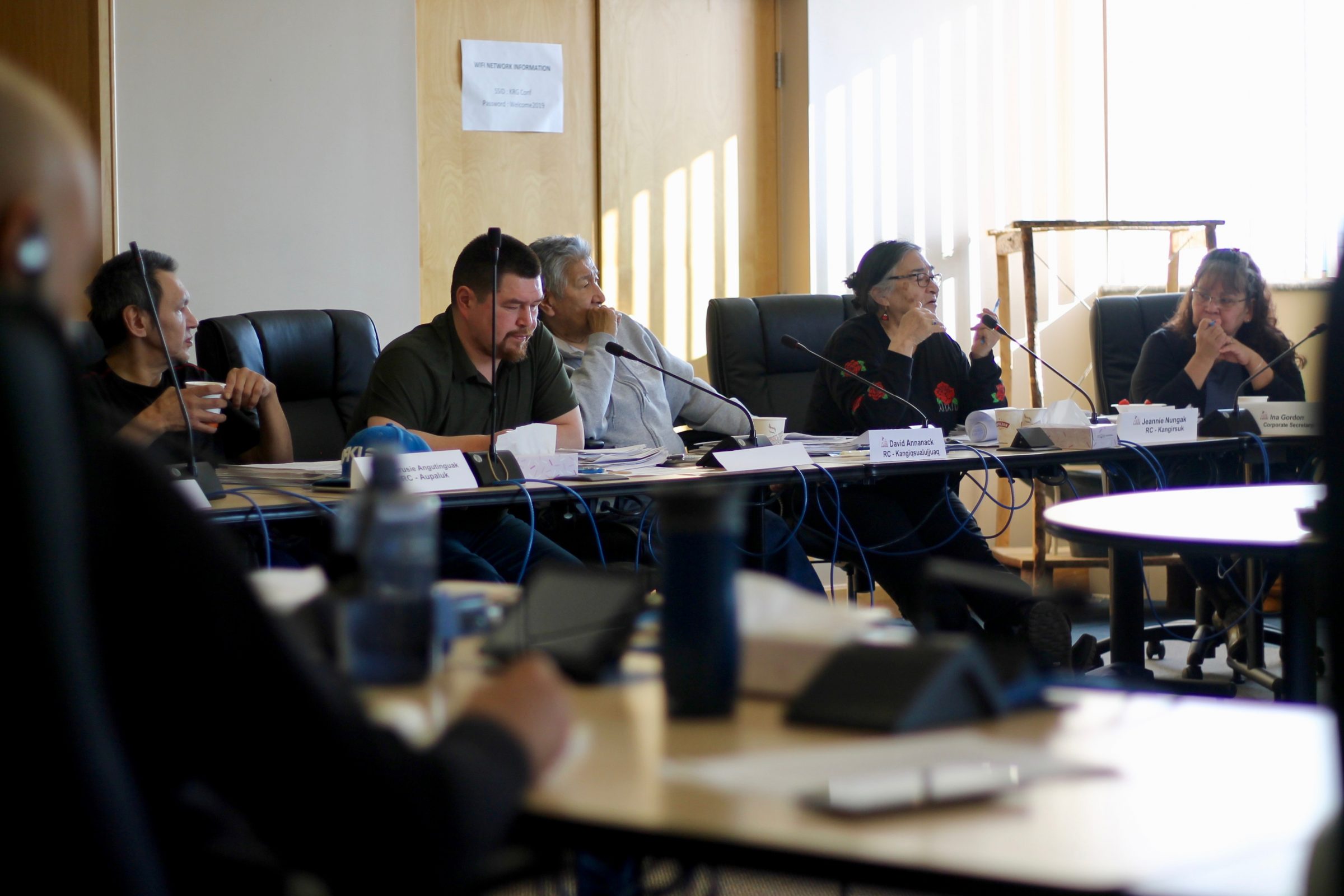 Jeannie Nungak (second from right), regional councillor for Kangirsuk, voices the concerns of her community about how their water plant has been down for two months due to a frozen supply line. (Photo by Elaine Anselmi)

One community that’s seen major infrastructure issues of late is Kangirsuk, where the water supply line froze in the sub-zero temperatures.

“All of this has been going on since Christmas when we received a call just after the holidays and needed to send assistance right away,” said Paul Parsons, director of public works

Since then, a technician has visited the community and additional equipment was provided. But, Parsons said, they are still working on getting flow back through the water plant.

“It was a real Murphy’s Law that was happening in full effect,” he said. “Everything that could go wrong, did go wrong. If we go outside we can understand why it’s tough time of year. It is cold.”

Jeannie Nungak, regional councillor for Kangirsuk, said one of the issues was that there were no gauges to alert the water plant operator to an issue.

“It’s because it was like this that it was too late for them to do something about this,” Nungak said. “It was just about to break down.”

Until it’s repaired, the water trucks are collecting water from a nearby lake to deliver to houses. The process is slow—about 45 minutes per fill—Nungak said, though the truck operators are doing everything they can to keep it going.

“We’ve gotten used to the things in our community that make us comfortable,” Nungak said.

Parsons said the department has been in constant contact with the northern village and the water plant operator to address the issue.

“It’s been a long two months, a little over two months that this has been going on. I do feel for the community,” Parsons said. “We understand the frustration of the population there.”

Elsewhere in the region, a new water plant is completed and in operation in Kuujjuaq.

In March, tenders will go out for upgrading the UV systems at Akulivik’s and Umiujaq’s water plants.

Tenders will also go out at that time for retrofits of reservoir tanks in seven communities: Tasiujaq, Kangirsuk, Ivujivik, Inukjuak, Aupaluk, Quaqtaq and Salluit.

Billy Cain, regional councillor for Tasiujaq, said his community’s water supply has a strong chlorine smell—unlike the water from the treatment centre in Kuujjuaq. Parsons said this was something the department would look into with the northern village, to ensure levels are correct.

A new tender for the demolition and re-construction of Kangirsuk’s arena—which was destroyed by fire last year—will go out this spring. If successful, Parsons said the new arena should be completed in 2021.

Parsons said the diesel smell was due to an issue with the tank but as this wasn’t prioritized as a project by the northern village, they don’t yet have the funding to take this on.

“When we do have our techs on rotation, we can see what we can do to secure the situation so it doesn’t get worse,” Parsons said.

On the long-awaited community pool for Akulivik, Parsons said, they are still waiting to see if there is enough funding to get the project underway.

Aliqu said that having a pool is important to the community, where multiple drownings have occurred in the area where people go to swim.

A call for tenders for Kangirsuk’s community centre renovations will also go out in March.

“In Kuujjuaq in the spring, when the ice is melting, in the new area going toward the dump, there are a lot of puddles in that area,” said Jobie Tukkiapik, Kuujjuaq’s regional councillor.

He said the roads are hard to navigate because of the puddles, and asked what could be done to resolve this.

Parsons said there would be work done to correct drainage, alleviating some of the pooling.

“We wanted to address that in the fall. We weren’t able to but will in the spring,” he said. Drainage improvements will also continue through 2020 in Inukjuak.

A proposal for five-year funding for road repairs is in the works, but Parsons said there wouldn’t likely be any paving done this year.

“We’ll only be able to purchase tar if possible and coordinate manoeuvering of equipment,” he said. “We’ll try our best to do some, but it might turn out to be just [a] purchase of tar.”

A feasibility study is being done on a second road to Kangiqsualujjuaq’s new development area. Roads for the new housing area in Salluit are also being constructed throughout 2020.

In Kuujjuaraapik, the department is working with the KRG’s transportation department on upgrading the existing road to the solid waste site. Public Works has also prepared estimates for the construction of a new road to the site.

Nearly across the board, the breakdown of equipment such as sewage and water trucks was brought up by regional councillors.

But, Parsons cautioned, regular maintenance on these vehicles is critical and has to be kept up with by the northern villages.

If vehicles are only lasting a few years, Parsons said it’s difficult for the department to make the case to the province to fund new vehicle purchases.

“Our engagement is there to assist the village, not to go there and do the work for the village,” Parsons said. “We have to be hand-in-hand with your staff on the issue at hand and work together on it.”

As well, he said, it’s important that northern villages alert them before vehicle issues get worse. “I’m not the first director to remind each NV [Northern Village] how critical it is not to wait until the last truck you have is functioning and then a red flag is sent out to MPW [Municipal Public Works] to send someone,” Parsons said.