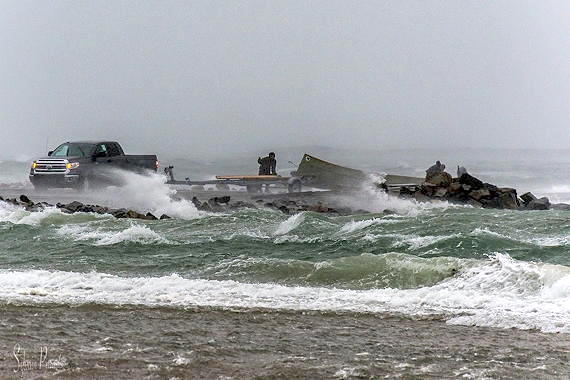 A man in Inukjuak tries to pull in his boat in October 2018 as high winds create choppy waters at the Nunavik community’s old dock. (Photo by Sylvain Paradis)

The common problem of Nunavik’s community docks being unusable at low tide was raised at the Kativik Regional Government meetings on Nov. 26.

For search and rescue operations, this is a significant concern, several regional councillors said.

“In Aupaluk we are able to put the emergency boat in only when it’s very high tide,” said Lazarusie Angutinguak. “Luckily we haven’t had to use it when the tide is low.”

Annie Kenuayuak from Salluit said ships often arrive in the community, but the dock is only big enough for canoes and small boats.

“When it is too stormy and too windy the ships have to wait and go inside the bay of Salluit and wait for the weather to get better,” she said.

With better marine infrastructure, she said the ships could dock at the community and not lose a day or more when the bad weather continues.

A study is underway of marine infrastructure needs across Nunavik. An engineering consultant visited every community and a final report should be submitted in the coming months, said Ian Darling, the KRG’s director of transportation.

“The report is almost finished and is supposed to be reported to me,” Darling said. “I am disappointed because there was a survey sent out to every community, to the Northern Villages, to fill out with what their concerns were. That is not acceptable to me because I wanted them to have eyeball to eyeball conversations with each community.”

Where those surveys weren’t filled out, Darling said the contractor went down to the docks and spoke with hunters and fishers about their concerns.

Though the resulting report hasn’t yet been submitted, Darling said it would not be accepted if it’s not absolutely adequate. This could require the consultant to return to each community.

Once the finalized report is received, Darling said they would be negotiating with the provincial and federal governments on funding for the necessary marine infrastructure.

“Funding was stopped by the provincial government last year, so we didn’t have any funding for marine infrastructure this year,” he said.

Another issue is a lack of funding for upkeep, said Darling. “What they did give us before was a pittance,” he said.

It equalled to about $22,000 per community per year, which he said is quickly used up.

The problem of communities’ rescue boats being stranded by low tides will be included in future funding requests, he said.

“That’s good information to have when you go to the government. When you tell them you can’t get a rescue boat in the water at low tide, that’s a safety issue, and they’ll look at that.”