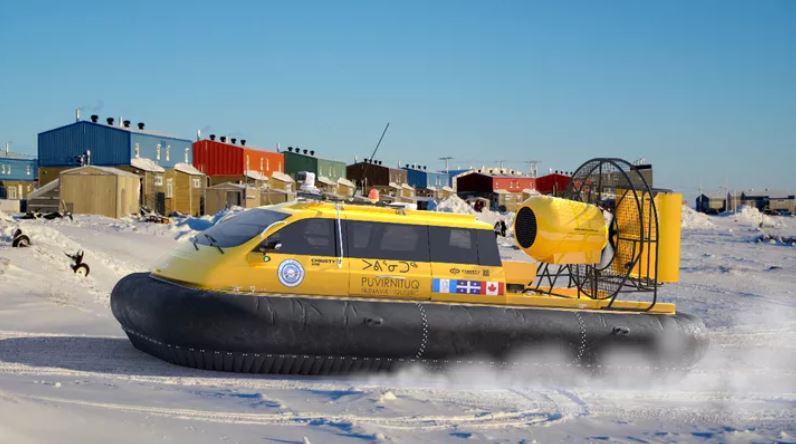 Puvirnituq’s Nunavik Arctic Survival Training Center is hoping to purchase a hovercraft for search and rescue missions. (Photo provided by the NASTC)

A Nunavik search and rescue team says the warming Arctic climate has forced them to look into buying a hovercraft to modernize their capabilities.

Paulusie Novalinga is the president of the Nunavik Arctic Survival Training Center, a Puvirnituq-based non-profit organization that teaches Arctic survival and provides search and rescue services to the community. He said a hovercraft would be “perfect” for the centre’s ice and water rescue missions.

“Now is the time to start thinking more modern, like, the hovercraft would be really good for rescues on thin ice or over water,” Novalinga said. “No reason why we shouldn’t have it here.”

Novalinga said the weather in Puvirnituq has been noticeably warmer than usual for this time of year, and that’s a big concern for seal hunters who spend their days out on the ice.

“The ice tends to be more dangerous than it used to be… It used to freeze over enough to support us, but these days, it never occurs,” he said. “The seasons are really late, and the ice is somewhat thinner nowadays.”

The centre has launched a crowdfunding campaign on GoFundMe with a goal of $600,000 to purchase the hovercraft and build a heated storage facility. So far the campaign has only raised $530.

The storage facility would double as a base of operations for the centre’s rescue diver team, he said. “We’d be fully equipped with diving equipment and people would be on standby full time.”

“We would like to be funded,” he said. “It would very much help our way of life because we live off the land.”

Hovercrafts are not commonly used in Arctic search and rescue, said Tom Girrior, a representative for the Search and Rescue Volunteers Association of Canada in the Northwest Territories.

“The big issue with using hovercrafts in the North, other than that very few people use them, is the fact that they’ll be one hell of deal trying to maintain these things in the winter time,” he said.

Jason Hudson, the president of Yukon Search and Rescue, echoes a similar sentiment. In his experience of working across the North, Hudson said he hasn’t used hovercrafts for rescue missions. However, the risks of climate change are still a concern.

“The ice isn’t as consistent or known as it once was,” he said.

“Ice conditions or travel ways are not necessarily, particularly in the winter months, always what they were X number of years ago.”