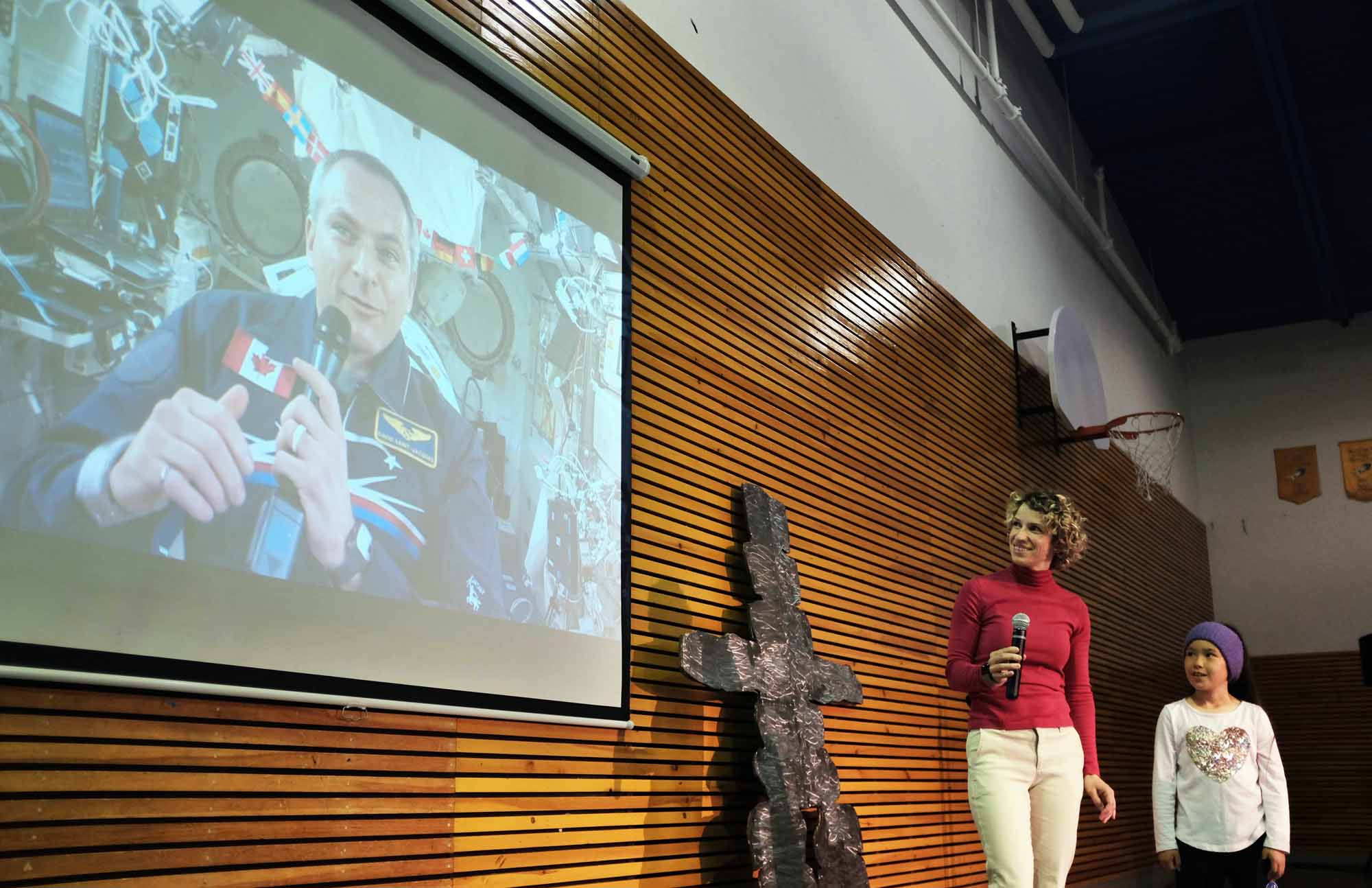 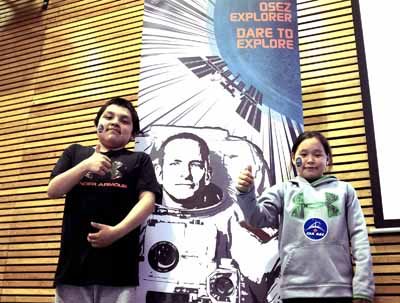 Umiujaq students Corston Paul Tookalook and Sarah Rose Novalinga each got to ask questions of astronaut David Saint-Jacques during a livestream with the International Space Station May 31. (Photo by Kativik Ilisarniliriniq/Jade Duchesneau Bernier)

How do astronauts pee aboard the International Space Station? Novalinga giggles.

The Grade 4 student is watching Saint-Jacques on a large screen set up in the gymnasium of Kiluutaq school in Umiujaq, connected via a NASA satellite. The Quebec astronaut and former Nunavik doctor is a flight engineer on the six-month ISS mission.

The Canadian Space Agency has arranged a number of videoconferences to connect the ISS with schools across the country, but this is the first one in Nunavik.

To help answer Novalinga’s question, Saint-Jacques illustrates the challenge by pouring some water, which forms as a bubble and floats around him until he grabs it and puts it in his mouth.

Rather than let pee float around the station, Saint-Jacques explains that he has to go to the bathroom into a vacuum-like device that essentially captures the liquid. Laughter ensues.

Another Grade 4 student, Corston Paul Tookalook, then asks Saint-Jacques if and how he exercises to stay healthy aboard the ISS. It turns out Saint-Jacques does an hour on a stationary bike or treadmill each day that he’s in space.

Tookalook said he was “surprised” to hear that. He said he admired Saint-Jacques for going on such a “scary” and far-off mission.

If they weren’t already impressed, some of these students found out more recently that they were actually delivered by Saint-Jacques, a doctor who worked out of Inuulitsivik health centre on Nunavik’s Hudson coast for a period in the 2000s.

That made Saint-Jacques’ virtual visit to the school that much more meaningful, said Kiluutaq principal Matthew Bryan.

Saint-Jacques had last been to Kiluutaq to visit in 2015, Bryan said, when he was still a short-listed candidate for the ISS mission.

There’s a photo up in the hallway of the school of the astronaut with the phrase “follow your dreams” written across it in Inuktitut, English and French.

“It’s very important for our students to dream big,” Bryan said. “Not only to set goals but to talk about the future, and what steps need to be accomplished to reach particular goals. And staying in school to do those things.”

A little piece of Umiujaq floating in space 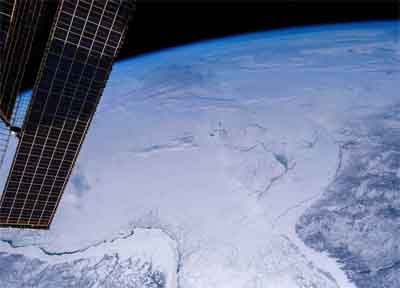 David Saint-Jacques snapped this aerial view of the Nunavik region from the International Space Station earlier this year.

Véronique Morin, who is married to Saint-Jacques, still works as a doctor with the Nunavik Regional Board of Health and Social Services, as an advisor on infectious diseases.

She speaks to her husband at least once a day and Skypes him every weekend with the couple’s three young children, age two, five and seven.

Morin attended the space contact event May 31 and told students how she and her husband are reminded of Umiujaq almost every day.

Both Morin and Saint-Jacques held up their hands to reveal walrus ivory rings—engagement rings they purchased from Umiujaq artist Daniel Kumarluk before the couple married in 2008.

“People were just so touched to see a little piece of Umiujaq floating in space,” Morin said.

“They just want to be able to relate to what an astronaut does in space.”

Other items from the region that Saint-Jacques took aboard with him: a sealskin bracelet, a pair of handmade mittens (pauluk) and a piece of the tundra.

The Canadian Space Agency had previously organized one other space contact in Nunavik, at Ulluriaq school in Kangiqsualujjuaq, though it was only audio through a radio signal.

The May 31 video link was transmitted from the ISS to satellite Anik F1 from a Toronto-area teleport and then to an antenna set up outside Kiluutaq school.

Umiujaq was one of 12 Canadian communities or schools to make live visual-audio contact with the ISS since the mission began last December.

Saint-Jacques is scheduled to return to Earth on June 24.