“The federal government’s not going to pay for it” 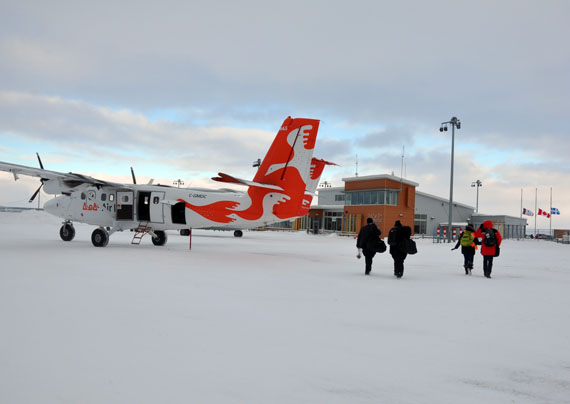 Puvirnituq’s airport was most recently renovated in 2012 and is already fitted with the space needed for a screening station. (PHOTO BY SARAH ROGERS)

KUUJJUAQ—Another year, and still no screening services for air passengers travelling from Puvirnituq.

The Kativik Regional Government, which manages Nunavik’s airports, has been asking the federal and provincial governments for many years to install a security screening station in Puvirnituq, which is considered a transportation hub for Nunavik’s Hudson coast.

The presence of a Canadian Air Travel Security Authority, or CATSA, screening station would mean flights departing from the community en route to Montreal would not have to stop and disembark passengers for screening in La Grande, as is currently the case.

As home to the Inuulitsivik Health Centre, Puvirnituq is the base for many medical travel trips to the South. It also means many passengers are travelling in stretchers and wheelchairs.

Air Inuit is “bombarded” by complaints about the deplaning, said the director of the KRG’s transportation department, Ian Darling.

Recent changes to the Canada Transportation Act allow smaller community airports to install CATSA screening, but it leaves those communities on the hook for the cost, Darling explained.

“The federal government’s not going to pay for it,” Darling said.

His hope is to get the province on board. Darling estimates the screening station would cost about $1.7 million to install and another $1.2 million to operate each year, including the handful of employees that would be required to staff it.

But Darling told KRG regional council meetings on Thursday, Nov. 29, that the department is “back to square one” following the October election of a new Quebec government.

Darling said he plans to meet with Quebec’s transport department to press the issue in the new year.

Puvirnituq’s airport was most recently renovated in 2012 and is already fitted with the space needed to put in a screening station.

If CATSA agrees to install the station, Puvirnituq will be the third airport in Nunavik with screening facilities, after Kuujjuaq and Kuujjuaraapik.