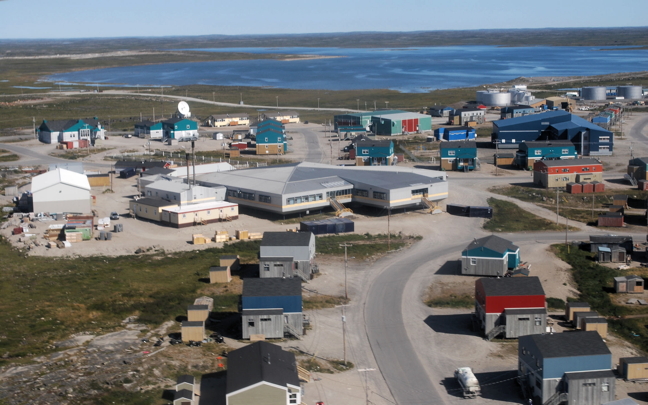 Puvirnituq’s Inuulitsivik Health Centre is seen from the air. This month, the community will serve as the pilot for the Nunavik Wellness Court, which aims to rehabilitate and reintegrate people with drug and alcohol addictions. The health centre and various other partners with the Saqijuq project have also started a mobile intervention team to respond to crises that don’t require law enforcement. (File photo)

Presided over by a Quebec judge, the aim of the court is to encourage rehabilitation, rather than criminalization, of residents with drug and alcohol addictions.

“Many of our people are not criminals but because of addictions, they break the law and end up in the judicial system,” said Minnie Grey, executive director of the Nunavik Regional Board of Health and Social Services.

“This is our way of trying to address that.”

“It signifies saving someone who has gone astray because of life’s challenges,” said Grey. “It’s a hook, it catches them.”

The wellness court falls under the larger Saqijuq project that was established in Puvirnituq in 2014 under the NRBHSS to reverse the over-criminalization of Nunavimmiut due to offences committed while under the influence of addictive substances.

Saqijuq means a change in the wind’s direction.

In Puvirnituq, Saqijuq works with youth and people at risk, hosting on-the-land camps, bringing youth out with elders to learn to hunt and fish. This year, they held a shore cleanup to collect garbage littering the community.

“We talk to people at risk to help them contribute to the community and society,” said Grey.

It’s a preventive approach to their ultimate goal of diverting people from the justice system.

“We decided if we’re really going to act on Saqijuq, we need a wellness court,” Grey said.

“If we want to make a difference in people’s lives, people struggling with addictions and breaking the law, instead of making them into criminals, we can help them make better choices.”

Working with the Court of Quebec, they identified a similar addiction treatment program in place in Montreal and developed a program that fit Nunavik.

The first wellness court date is Tuesday, Oct. 8, in Puvirnituq. It was previously set for September 20, but no clients were available.

The Nunavik Wellness Court can be chosen by clients in Puvirnituq as an alternative to the judicial system.

The court is only for minor crimes—more serious offences, such as particularly violent crimes, will continue to be handled by the criminal court system. If there is a victim involved, their safety and needs are a part of the judge’s consideration, according to the Court of Québec.

The offender has to accept responsibility for the crime they’ve been charged with and for their addictions that led to the crime, in order to be eligible, according to the court.

They have to agree to the conditions set out and requirements of their program, and check in regularly on their progress when summoned by the court.

The wellness court allows the presiding judge to give alternative sentences to offenders that include a plan for rehabilitation and reintegration into their community, after committing an offence related to their addictions.

Offenders in the program can serve their sentences with counselling in their community, on the land, or at an addictions treatment centre, rather than in jail. It is still supervised by the court, but isn’t limited to punitive justice.

“By offering drug-using offenders the opportunity to undergo a treatment that is tailored to their circumstances and supervised by the court, the program relies on genuine support for these people, during and after therapy, to lead them towards lasting change in their way of life,” said Lucie Rondeau, chief judge of the Court of Québec.

This spring, Saqijuq also launched its mobile intervention team in Puvirnituq that works closely with the KRPF, the Inuulitsivik Health Centre and various government departments.

Teams are made up of a social worker and a KRPF officer who is specially trained to intervene in situations that don’t require detainment or other police responses, when they get the call.

“They work with people who are intoxicated, suicidal, dealing with mental health issues. That team might recommend a person needs to go to the hospital or they might be able to deal with the situation and do a follow-up the next day,” said Grey.

It allows the team to respond to situations that otherwise might have gone unreported and in a way that’s less imposing than officers in police cruisers. It’s also relieved some of the burden of partnering organizations.

“We are very pleased with the already noticeable and positive changes that are linked with the implementation of the Mobile Intervention Team,” Jean-Francois Morin, KRPF’s deputy chief, said in a Sept. 20 statement.

“It’s taken away a considerable workload from our officers, and the team has been very active throughout the community, creating positive connections with the other organizations and, most importantly, the people from the community.”

Saqijuq programming is also under development in Kangirsuk, Grey says, and, over time, the hope is to bring it to other communities as well.