Nunavik youth can get vaccinated starting next week 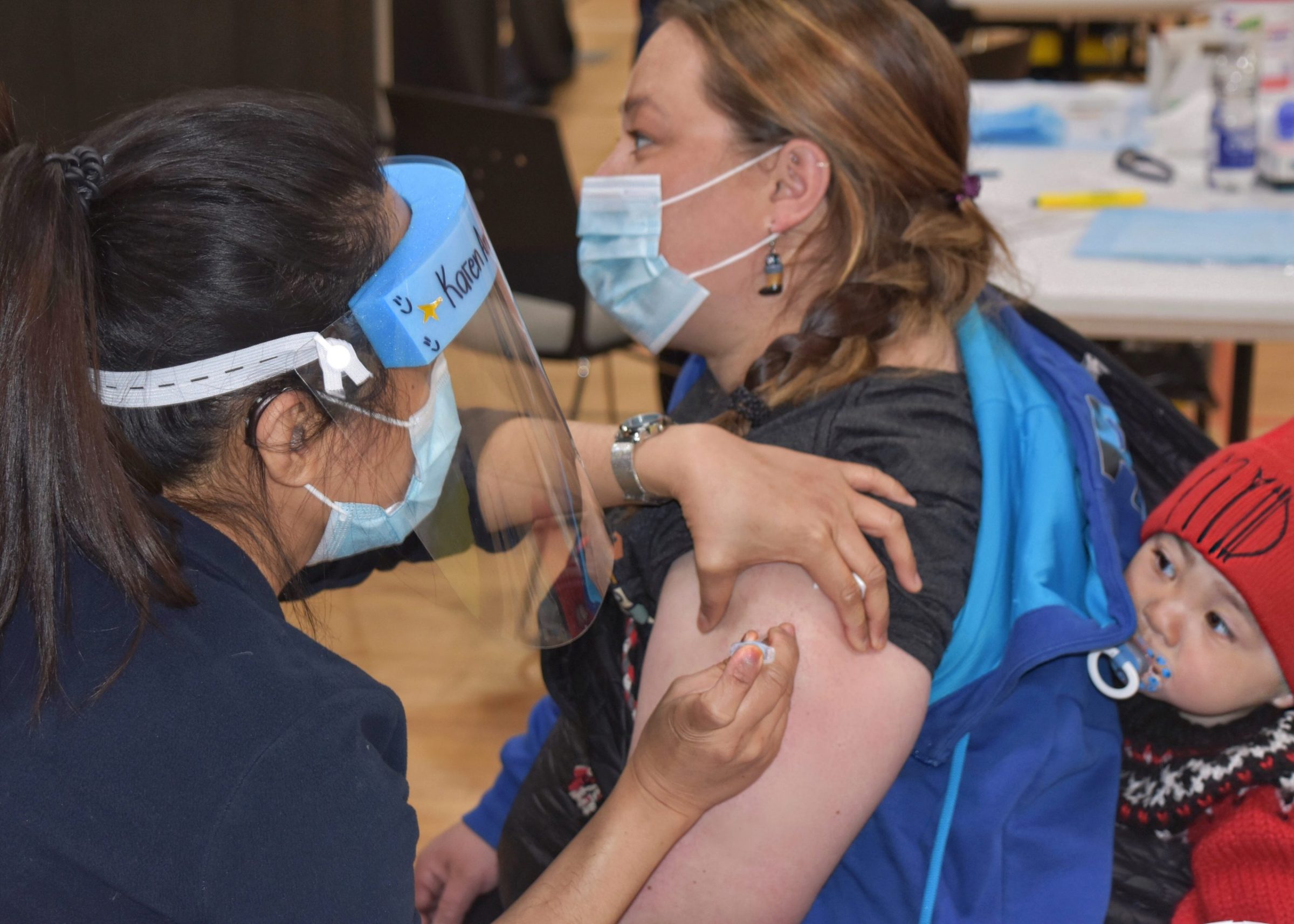 Qullik Sequaluk of Kuujjuaq receives her second dose of the Moderna COVID-19 vaccine in late April while her 17-month baby boy, Lucassie, looks on. A third phase of vaccinations are scheduled to begin in Nunavik next week, when Pfizer doses will be made available for youth aged 12 to 17. (Photo by Niivi Snowball)

Nunavik youth between the ages of 12 and 17 will be able to get vaccinated against COVID-19 starting June 15, the regional health board announced this week.

The distribution of Pfizer-BioNTech vaccines, which have been approved for use in this age group, will begin through the region June 14.

“It will be available in each and every village at the [local health centre] during the summer months, and once youth are back to school, an immunization campaign will be organized for the vaccine to be accessible at school — as is already done for other vaccines,” said Nunavik Regional Board of Health and Social Services spokesperson Josée Levesque.

This will mark the first delivery of Pfizer vaccines to the region. It has more sensitive shipping and handling requirements than Moderna, which is the vaccine previously used to immunize adults in the region.

The Pfizer vaccine will be shipped frozen, then thawed and stored in the villages, Levesque said, so the health board plans to distribute small quantities to start, and order more according to demand.

With an estimated 1,600 youth across the region who are eligible to be vaccinated — about 10 per cent of the population — Nunavik health officials hope this next stage of its immunization campaign will help bring up coverage rates across the region.

One in five Nunavik adults have been fully immunized against COVID-19 following a region-wide vaccine rollout.

The health board’s latest numbers, released in late May, show that 35 per cent of Nunavimmiut have a first dose, while 20 per cent of residents received a second dose.

Throughout the rest of the province, just over 65 per cent of the population has received at least one dose.

Quebec’s goal has always been to immunize at least 75 per cent of its population in order to achieve herd immunity.

Levesque called the low vaccine uptake is a “concern” for Nunavik.

“We can’t make the coronavirus disappear, but what we can make disappear is our own vulnerability to this virus as individuals and communities — by vaccinating,” she said.

Youth under the age of 14 will need parental consent to get immunized. Youth over the age of 14 should seek parental guidance, Levesque said, but they are legally considered able to consent or refuse medical treatments like a vaccine.

Nunavik health officials have already started to ease up on certain public health restrictions in the region among fully-vaccinated people or in communities with higher rates of vaccine coverage.

Travellers to and from Nunavik who have received two doses must now only quarantine for seven days, rather than 14, when entering the region.

Starting next week, Kangiqsualujjuaq and Kuujjuaraapik — which count among the highest percentage of vaccinated adults in Nunavik, at about 50 per cent — will be allowed to enjoy larger private gatherings with an additional 10 fully-immunized people present, so 20 people in total.

Indoor and outdoor private gatherings continue to be limited to 10 people in other communities.