“Our goal is to reach a settlement” 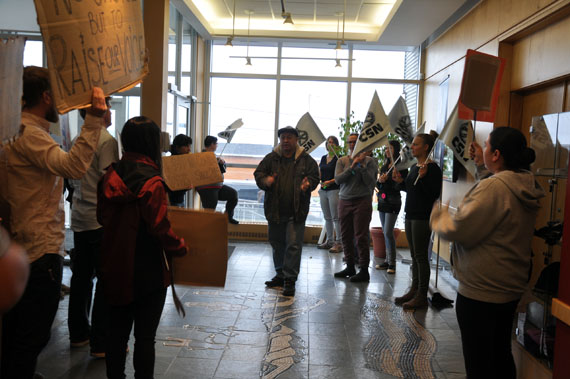 The union, which oversees about 200 employees at Nunavik’s regional administration, is stepping up pressure tactics as the group nears three years without a contract.

The groups reached an agreement in principle last April.

But as parts of that agreement were translated, the union said the KRG raised issues on retroactive pay for employees who have left their jobs.

Negotiations have been at a standstill since.

“Our goal is to reach a settlement,” said the KRGEU president, Victor Mesher. “But the management has been informed of our strike vote.”

Ninety-three per cent of the union’s members voted on Monday, Nov. 26, in favour of six days of strike action, to be used as deemed appropriate.

The first notice for one day of strike action is now set for Dec. 11.

The strike action excludes 66 of the union’s transport workers, who must adhere to the federal labour code.

The KRGEU’s contract expired in December 2015.

Both sides also agreed on an extra week of vacation for employees with at least 10 years’ experience, as well as the possibility of allowing employees to cash out a portion of their annual leave.

But that agreement later broke down over a letter of agreement to adjust the salary scale for certain classes of employment, which provides yearly salary increases ranging from $5,000 to $10,000.

In the early fall, the union, which falls under Quebec’s Confédération des syndicats nationaux, filed a complaint with Quebec’s labour tribunal (Tribunal administratif du travail) to say that KRG management had negotiated in bad faith.

But a date has yet to be set for an appearance before the tribunal.

Should the KRGEU decide to move forward with strike action, the union is required to give at least seven days’ notice to the KRG. As the regional government delivers services deemed essential, the union would have to negotiate the level of services to be maintained during any strike action.

“Our goal is not to strike,” said executive union member Liza Cotnoir. “We want to talk.”

“We’re hoping that the new KRG council will have compassion for the employees … and commit for once and for all to what we’ve asked for.”

The strike mandate coincides with the KRG regional council’s re-election of Jennifer Munick to another term as chair.

Munick addressed the ongoing contract talks in a speech to regional councillors on Tuesday, Nov. 27, expressing hope for a quick resolution.

“They are our employees and they always comply and do their job,” she said.

“If we will want to have good employees, we’ll have to work together.”