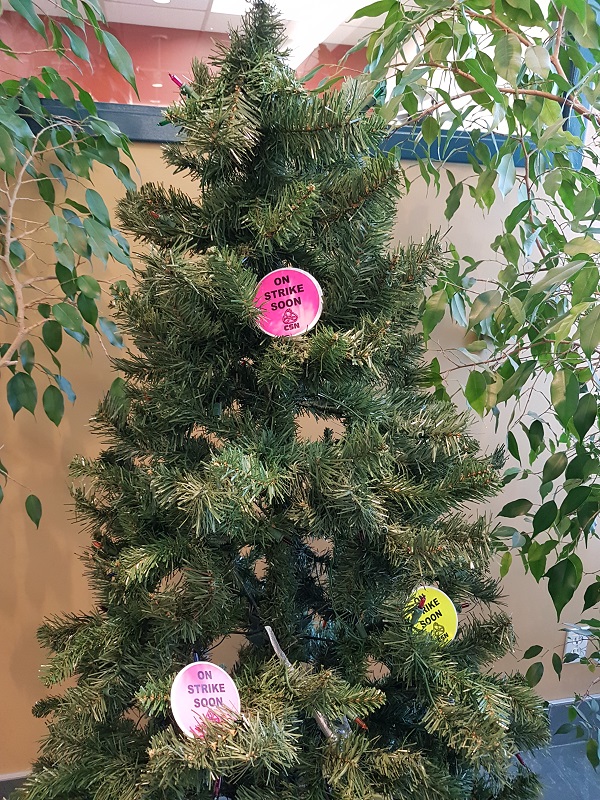 A Christmas tree in the lobby of the KRG’s main office in Kuujjuaq is decorated with KRGEU buttons on Thursday, Nov. 29. The union voted for six days of strike action, the first of which could happen on Dec. 11. (PHOTO BY SARAH ROGERS)

“These are our employees. And it’s been too long now.”

KUUJJUAQ—Kativik Regional Government councillors are urging the organization’s management to try to resolve a deadlock in negotiations with employees before their union makes good on plans to strike.

The Kativik Regional Government Employees Union, which oversees about 200 employees at Nunavik’s regional administration, is stepping up pressure tactics as the group approaches three years without a contract.

Ninety-three per cent of the union’s members voted on Monday, Nov. 26, in favour of six days of strike action—the first of which is tentatively set for Dec. 11.

“It’s been a while now since they’ve been trying to come up with an agreement,” KRG’s new vice-chair Hilda Snowball told human resources managers at regional council meetings on Thursday, Nov. 29.

“These are our employees. And it’s been too long now.”

Regional councillors expressed concern about how a strike would affect the KRG’s operations.

As the regional government delivers services considered essential, the union and management would first have to negotiate and agree on the level of services to be maintained during any strike action.

“We have to consider this as being important,” said Jobie Tukkiapik, elected as an executive member to the KRG’s council this past week, and a former director of the organization.

“I don’t think our employees have ever gone on strike at KRG.”

KRG’s management and union had in fact reached an agreement in principle last April, which included a 2.5 per cent wage increase for 2016, 2017 and 2018 and a two per cent increase for 2019.

But the agreement was never finalized when the two parties disagreed over what the union described as wording that would adjust the salary scale for certain classes of employment.

“There are two major areas that we disagreed on,” he said, noting those issues remain confidential. “We asked that those two items be put aside so we can proceed with the collective agreement.”

Now the management and union are waiting to set a date to appear before Quebec’s labour tribunal (Tribunal administratif du travail), he said, which won’t happen until 2019.

KRG management is meeting separately with its transport workers in December, who are excluded from the strike action as federal employees.

The regional government has gone ahead to implement the pay increases negotiated in the April agreement, Poirier noted, paying out the increases in September and retroactive pay in October.

Asked about which services the KRG delivers that are considered essential, he said that is still to be determined.

“We still haven’t negotiated that,” he told regional councillors.

“If it’s essential services, those individuals won’t be able to strike.”