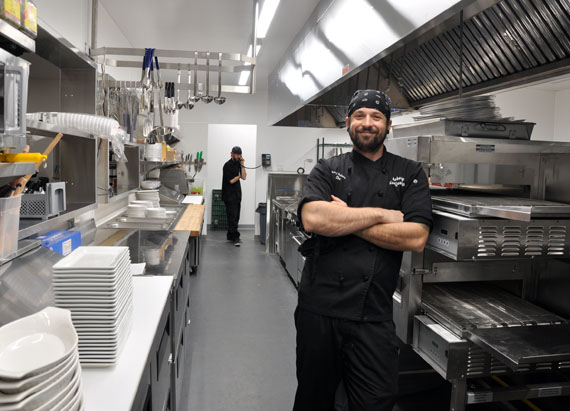 KUUJJUAQ—Samuel Hamel-Ratté hovers proudly over the new steam pot in the kitchen of the Kuujjuaq Inn restaurant.

This shiny piece of equipment is a new, $25,000 addition to the restaurant’s kitchen, used to make soups, bouillons and other sauces.

Unfortunately, it took rebuilding the kitchen from scratch to bring in such a thing.

It’s taken almost eight months to reconstruct the kitchen and dining room, with the new restaurant planning to finally re-open to the public on Thursday, Nov. 29.

“I know people have missed it,” Hamel-Ratté said. “It’s the only full-service restaurant here.” The new dining area of the Kuujjuaq Inn restaurant opted for a more open space, with booth seating along the back walls. (PHOTO BY SARAH ROGERS)

Hamel-Ratté, who has worked as the head chef at the inn for the last 14 years, helped to redesign the new kitchen, opting to create a more open space for its six cooks to work and communicate in.

Just days before the restaurant re-opens, the kitchen appliances gleam as cooks assemble the final pieces.

The dividing walls in the dining room have now been opened up, and the burgundy walls are now painted light shades of gray and cream, to offset the darker grey tables and new booth seating.

The menu will stay largely the same, with staples like salads, pastas and burgers. Kitchen staff are easing back into service over the weekend and won’t offer specials—which often include gourmet plates like steak and char—until next week.

The re-opening also coincides with the holiday party period; the restaurant is hosting its first event on the weekend.

The restaurant will be closed for two weeks at Christmas time, to give kitchen staff some time off.

After 14 years in the role, Hamel-Ratté has resigned and plans to move away in the new year. The assistant head chef, Yanik Jaques, will take over in February 2019.