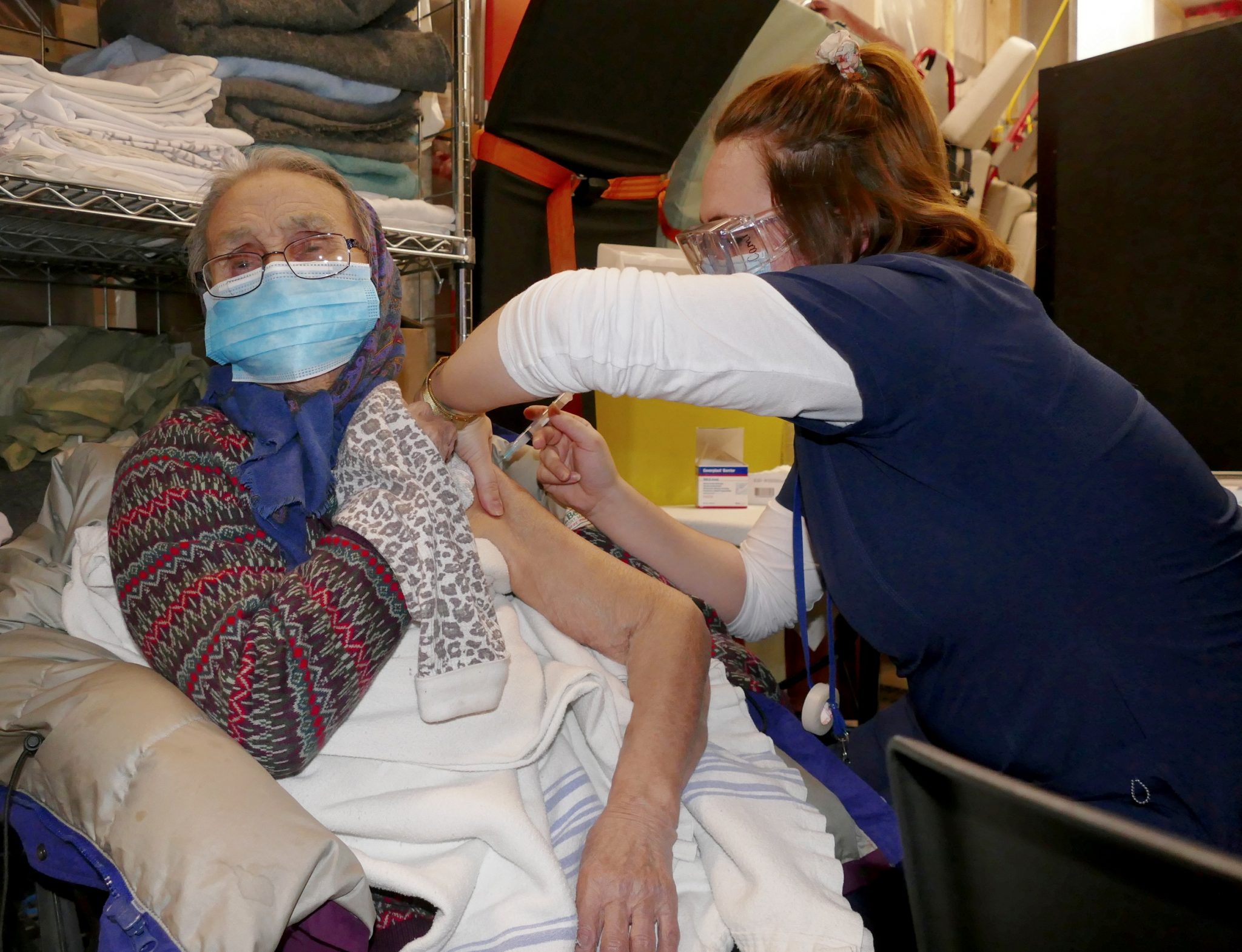 Kuujjuaq resident Christina Gordon was among the first in Nunavik to be vaccinated in January. (Photo courtesy of Allen Gordon)

The COVID-19 pandemic dominated headlines across Canada throughout the year; no less in Nunavik, where low vaccination coverage spurred a major outbreak across the region this autumn and early winter.

1. Nunavik was one of the first regions in the country to roll out its COVID-19 vaccination campaign earlier this year.

The regional health authority received its first batch of Moderna vaccines in late January, which were administered to Nunavik’s top priority group: health-care workers and residents aged 55 and up.

The Nunavik Regional Board of Health and Social Services initially aimed to reach 75 per cent vaccine coverage by March. But by May, only one in five Nunavimmiut adults across the region were fully vaccinated.

“Nunavimmiut are largely unprotected from COVID-19,” said board spokesperson Josee Levesque said at the time.

Vaccines remain available at health centres in the 14 communities across Nunavik, and health authorities have brought in Red Cross teams to help promote and assists with immunization clinics throughout the year.

Starting in late September, a handful of infections across the region quickly snowballed into a region-wide outbreak.

At its peak in early November, there were over 250 active daily cases of COVID-19 reported throughout the region and a handful of those individuals were hospitalized.

On Nov. 22, the Nunavik Regional Board of Health and Social Services announced that an individual in Kuujjuaq had died from complication linked to COVID-19.

“The COVID-19 situation in Nunavik is serious,” the stated a social media post on the board’s official Facebook page.

“It is worse than it has ever been compared to all of Quebec since the pandemic started.”

As a result, the region saw a number of school closures and new restrictions put on travel and public gatherings. The region’s health board asked that one person from each household be screened for the virus as a preventative measure

The health board said that 80 per cent of the people who have tested positive in the latest outbreak were “not adequately vaccinated.”

As of Nov. 10, the board said 63 per cent of Nunavimmiut aged 12 and up are now fully vaccinated. Coverage varies by community; 84 per cent of residents of Kangiqsualujjuaq are fully immunized, while just 44 per cent of Salluit residents have received two doses of a vaccine.

Aatami, 60, resigned from his role as president and CEO of Air Inuit — a subsidiary company of Makivik’s — late last year to run for president.

The leader’s history with Nunavik’s Inuit birthright organization goes back more than 30 years; he was first elected as a Makivik board member in 1987.

He then elected as the organization’s treasurer from 1993 until 1998, at which point he ran in a by-election for president. He served in that role until 2012.

In moving back into Makivik’s top role, Aatami edged out incumbent president and one Makivik’s founding presidents, Charlie Watt. Watt had run on a pledge to negotiate and secure a self-government for Nunavik.

Crews began laying the first portion of Tamaani’s underwater fibre network off the Hudson Bay coast, with the goal of delivering high-speed internet to parts of Nunavik by the end of the year.

The Kativik Regional Government contracted the French firm Alcatel Submarine Networks to install the underwater cable along the coast this past summer.

The KRG has said the network is set to be activated by the end of 2021 and should free up 25 per cent of Nunavik’s satellite capacity to other communities.

Tamaani hopes to connect the rest of the region to fibre optic by the end of 2023.

Earlier this fall, the KRG secured $53.4 million from a federal fund administered by the Canadian Radio-television and Telecommunications Commission to finalize its bandwidth upgrades for the region.

The KRG plans to continue laying fibre up the coast to the Hudson Strait in 2022, to connect Akulivik, Ivujivik, Salluit and Kangiqsujuaq. Kuujjuaq would be connected to another fibre optic line running south to Kawawachikamach, near Schefferville.

“Once we connect by fibre … that will free up bandwidth in those communities [which] will be spread out to the rest of the community.”

Prominent Nunavik Inuk leader and diplomat Mary Simon was named as Canada’s 30th Governor General in 2021, the first Indigenous person to take on the role.

Simon, 74, is originally from Kangiqsualujjuaq, and has called Kuujjuaq home for much of her life.

Nunavik featured largely in Simon’s July 26 installation ceremony in Ottawa; she wore a black dress and jacket designed by Victoria Okpik of Quaqtaq, with neckline beadwork done by Julie Grenier of Kuujjuaq. Salluit-raised singer Elisapie also performed a moving rendition of her song Arnaq during the event.

Simon talked about her childhood memories growing up, camping and harvesting along the George River near Kangiqsualujjuaq, and later in Kuujjuaq — moments she said helped shape her core values.

“My Inuktitut name is Ningiukudluk, and Prime Minister, it means bossy little old lady,” Simon said in her speech.

The Governor General is the Queen’s representative of Canada and acts as the country’s head of state.

Simon is responsible for dissolving Parliament before an election and for reading the Throne Speech that outlines the government’s legislative agenda before any new parliamentary session begins.