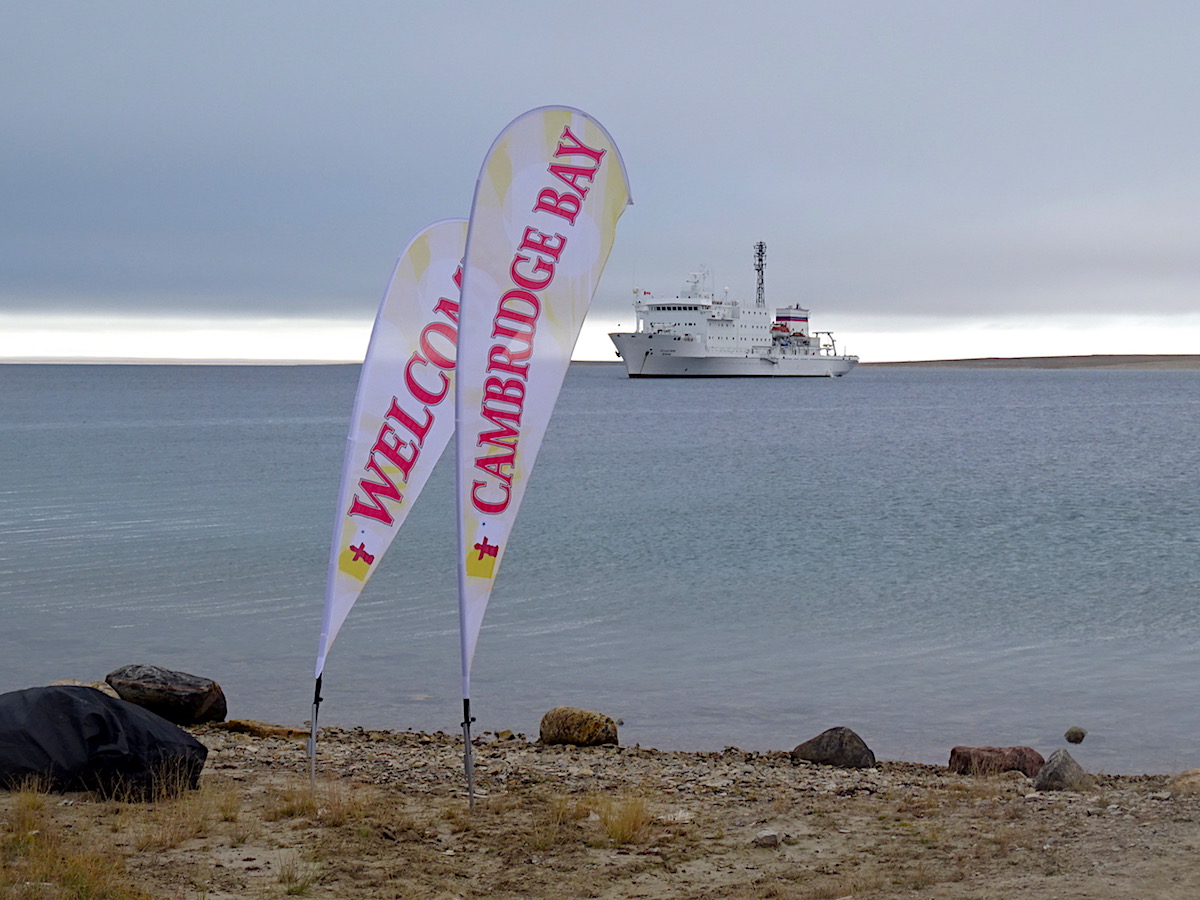 Banners greet a cruise ship visiting Cambridge Bay in August 2016. Arctic cruises have been banned in Canada this coming season due to concerns about the spread of COVID-19. (Photo by Jane George)

Nunavut artists accustomed to selling their work to cruise ship passengers can expect leaner times ahead, following the decision by Canada’s transport minister, Marc Garneau, to ban all Canadian Arctic cruises this season to help prevent the spread of COVID-19.

“The cruise ships bring pretty significant cash benefit to communities,” said Jackie Dawson, who holds a Canada research chair in environment, society and policy at the University of Ottawa and is the science director at Arctic Net.

But Dawson said she thinks that the dollar amount for 2019 is a “lowball figure.”

“A lot of the transactions are informal and they are in cash and they are not captured by Nunavut government numbers,” Dawson said.

The cash would have gone directly to arts and crafts producers and sewers, she said.

Gjoa Haven is an important community, she said, due to its HMS Erebus and HMS Terror National Historic Site and Nattilik heritage centre.

“They are going to be hit harder,” she said.

Even so, this coming cruise season would have been a bit flatter in Nunavut, she said, mainly due to the exit of one financially troubled company, One Ocean Expeditions.

One of its cruise ships, the Akademik Ioffe, hit a shoal near Kugaaruk in 2018, while in 2019, another ship, the RCGS Resolute, was seized in Iqaluit last summer over unpaid fees.

Garneau’s announcement also led to the immediate cancellation of Adventure Canada’s 2020 cruises on the Ocean Endeavour, including four voyages that would have travelled to Nunavut.

“We wholeheartedly support these measures. Everyone’s health and wellbeing must be top priority,” said a comment from Adventure Canada, which has since transferred its 2020 bookings to 2021.

The huge Norwegian shipping line, Hurtigruten, which temporarily suspended all its operations, cancelled five 2020 voyages on its Roald Amundsen and Fram ships through the Canadian Arctic.

“After more than 127 years of operation, we’ve learned from our past experiences weathering storms such as wars, recessions and outbreaks,” said Daniel Skjeldam the CEO of Hurtigruten, who said online that the current situation was a “temporary setback.”

The Qikiqtani Inuit Association had planned to capitalize on the growing cruise ship market this year by putting in mandatory tourism operation fees.

The new fees included a $25 per day fee applied to every passenger on a cruise ship accessing Inuit-owned lands.

Dawson said that cruise ships would have passed this additional cost on to their passengers.

Due to COVID-19, industry and government travel restrictions will also keep cruise ships from Alaska until at least July.

At the same time, the entire $45 billion-a-year cruising industry is now in desperate financial straits due to the spread of the coronavirus on board several cruise ships and widespread cancellations worldwide by various companies and travellers.

But Dawson said in 2021 the Arctic cruise ship industry could make a slow comeback.

“These cruise companies are not like the big cruises you hear about in the news. They are sometimes family-run and very serious about sustainability and appreciate actions, so I really hope that we see them rebound well,” she said. “It’s going to tough but the right people who are at the helm.”