Nunavut bans entry of most non-residents, requires returning residents to self-isolate before flight

“We are at a breaking point,” says health minister 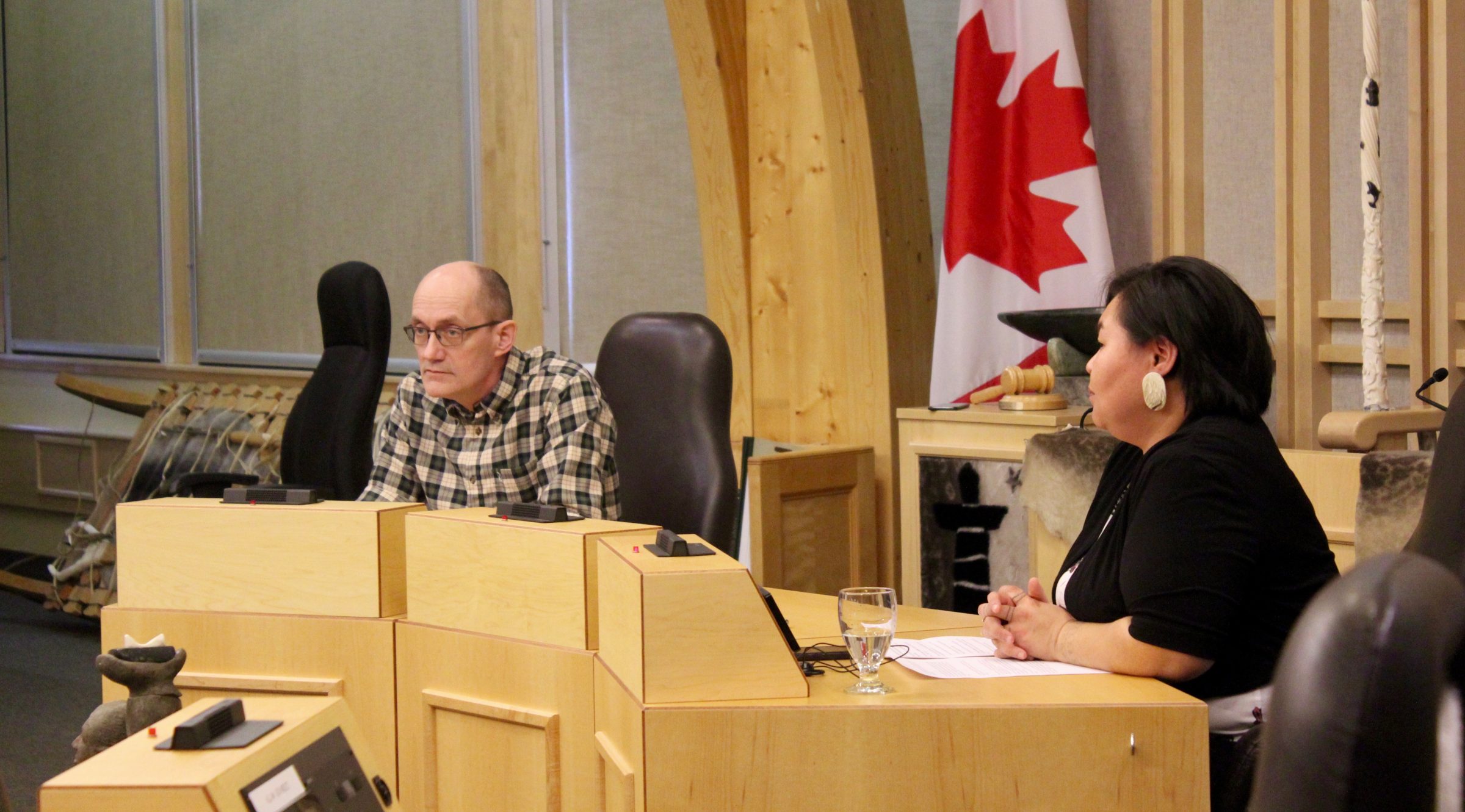 Michael Patterson, Nunavut’s chief public health officer, speaks to reporters at a news conference on Monday, March 23, where it was announced that non-residents and non-critical workers are banned from entering the territory. (Photo by Emma Tranter)

Starting one minute before midnight on Tuesday, March 24, only Nunavut residents and critical workers will be allowed to enter the territory.

The new restrictions mean that before boarding a plane to Nunavut, travellers will undergo a 14-day isolation period in Ottawa, Winnipeg, Edmonton or Yellowknife. This includes medical travel patients.

After 14 days, asymptomatic residents will be cleared and allowed to return to their home community.

Critical workers are exempt from the 14-day isolation period in the south but will need to provide written permission from the chief public health officer to enter the territory and must be asymptomatic to be cleared, Patterson said at a news conference.

Patterson said his department is reviewing the travel history of all critical workers arriving or returning to the territory from other jurisdictions in Canada for the three weeks prior to entering Nunavut.

“We are assessing whether or not they’ve been exposed to COVID-19. Individuals who have been through significant exposure will not be allowed to work,” Patterson said.

Critical workers will also be required to check in with their supervisor on a daily basis to assess how they’re feeling, for at least two weeks.

“Nurses and physicians will be required to wear a mask during all of their shifts for the first two weeks after returning to Nunavut,” Patterson said.

Before returning, Nunavut residents will be put up in hotels where they will receive three meals a day and be checked on two to three times a day, Patterson said. All accommodations, food and necessities for all travelers will be provided for free during the isolation period. Security guards will also be placed at isolation sites to ensure people are practising isolation.

“Those check-ins might not be physical. It might be phone calls. We’ll organize ways for them to safely get out of the room for brief periods of time,” said Patterson.

At the end of 14 days, if the person is asymptomatic, they will be given a letter stating they completed quarantine and will be allowed to board a plane to Nunavut.

“When they get into Nunavut, then they are free to go on about their business,” Patterson said.

Instead of the 14-day quarantine in a hotel, people also have the option to stay where they are, Patterson said.

“The other option for people if they feel safer or more comfortable is to, if they have it as an option, they can wait it out in the south and come back to Nunavut when appropriate,” Patterson said.

“This is the only way to ensure that everybody gets 14 days of isolation before they go into some of our more remote communities where the impact of COVID-19 will be the highest.”

Patterson said the GN will be sending a directive to the airlines to notify them of the new 14-day quarantine rule. The GN will also be posting more information about the new rules on its website, he said.

“The hope is that the airlines will communicate with people that they need this letter from my office saying that we know you’ve completed your isolation in the south and that you’re approved … to come into Nunavut without restrictions.”

All public gatherings are also banned, the GN announced on Monday. All playgrounds and municipal parks are closed.

Patterson encouraged people to spend time with family at home or go out on the land as a household, but not to gather in groups with other people.

“Organized activities like hockey games and skating rinks and playing as multiple family units in the park or having play dates, those are risky,” he said.

Patterson said because of the public health emergency declared by the territory last week due to COVID-19, the GN has the authority to issue directives to the airlines on who is allowed to board planes to Nunavut.

The GN announced in a news conference last week that it would provide financial support to licensed child care facilities to make up for lost revenue during the pandemic. Premier Joe Savikataaq said on Monday the funds will be processed and sent to eligible child care facilities by March 27.

“We are at a breaking point,” health minister says

“Whether you are sick or not, stay home. Unless you’re an essential worker, you should be working from home and avoid contact with others. Stay home,” Hickes said.

Hickes said it’s best not to bring children to grocery stores, and when possible to not visit stores in groups.

“The fact that we do not have a case in Nunavut does not mean we are safe. We are at a breaking point right now. If we follow the isolation rules, we may be able to contain any potential contact or spread in Nunavut,” Hickes said.

“Your kids should not play in groups. Keep two metres or six feet away from others at all times, even during play time,” he said.

“Do not make us have to take these people away from the COVID response to chase after people that are breaking the isolation rules,” Hickes said.

“We have measures we can enact to patrol the streets if necessary. Penalties for individuals breaking public health orders can be as high as $50,000 or up to a year in jail.”

“Think of it in this way: if your house was on fire, would you want the firefighters to be fighting the fire, or controlling the crowd?”