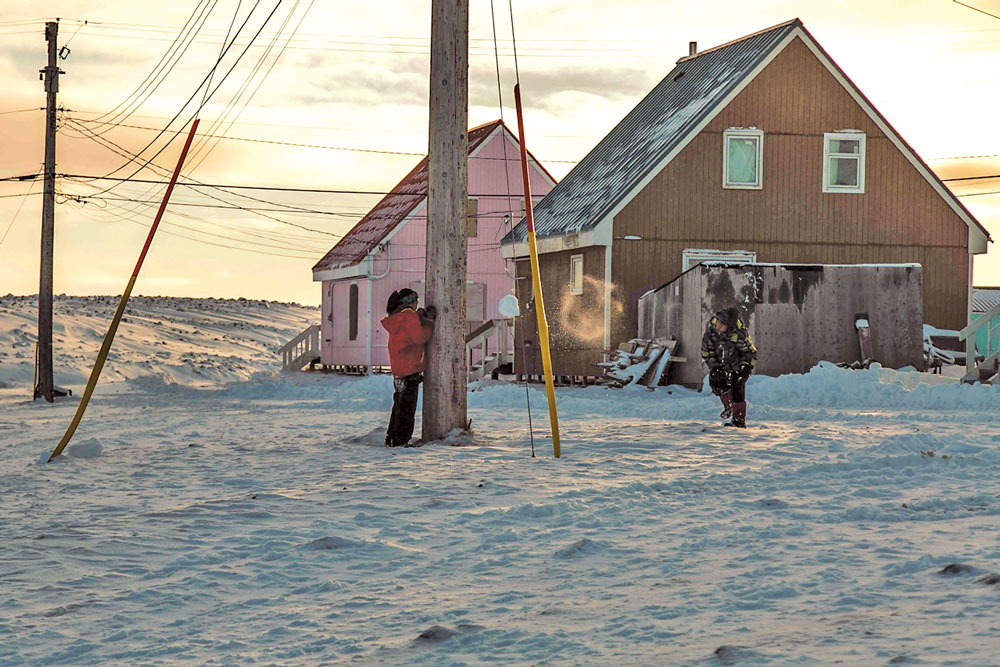 Children in Nunavut experience the highest rate of poverty in the country, according to a new report. Here, children play outside in Taloyoak. (Photo by Jonathan Nuss)

Nunavut has the highest child poverty rate in the country, according to a new report from Campaign 2000, a pan-Canadian coalition on child and family poverty.

At 31.2 per cent, Nunavut’s child poverty rate is well above the Canadian average of 18.6 per cent for children under the age of 18, according to the Report Card on Child and Family Poverty in Canada.

Manitoba has the second-highest child poverty rate at 27.9 per cent. Yukon has the lowest at 11.9 per cent.

In the country as a whole, 25 per cent of Inuit children live in poverty, the report states.

The report makes several recommendations to the federal government to reduce child poverty in Canada.

It calls for a $6-billion investment in Budget 2020 through strategic investments to meet more ambitious poverty reduction targets.

Other recommendations include increasing the Canada Child Benefit to support a 50 per cent reduction in child poverty by 2025, establishing a national pharmacare plan, implementing a $15 minimum wage and enhancing the National Housing Co-Investment Fund. 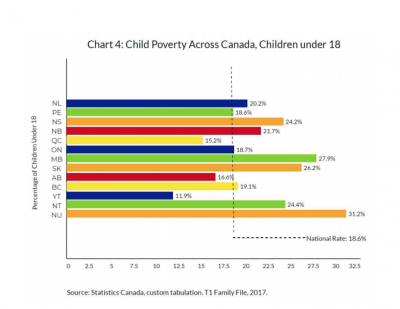 This graph shows child poverty rates across Canada compared with the national rate.

It also calls on the federal government to take targeted action to reduce household food insecurity.

In Nunavut, seven out of 10 children live in food insecure households, the report states.

In 2018, the federal government announced changes to its Nutrition North program, which included a 25 per cent increase to existing subsidies on some items, like milk and infant formula.

But the Government of Nunavut says more still needs to be done.

“The Department of Family Services was pleased to learn about changes announced to the Nutrition North program such as the new Harvesters Support Grant and subsidies for items transported via sealift. However, the Department believes the program could be further improved by making changes to the program design and by improving the transparency of the program,” a spokesperson for the department said in a statement to Nunatsiaq News.

In 2019, the federal government adopted the Poverty Reduction Act. The introduction of the act also entrenched the Market Basket Measure into law as the official poverty line.

The report does not use the MBM in its analysis of poverty rates in Canada. Instead, the report uses data from the T1 Family File (T1FF) tax filer data from Statistics Canada.

“The MBM establishes a low income threshold by costing out a basket of goods and services that an individual or family would need to purchase to be considered to have a ‘modest’ and ‘basic’ standard of living. This basket includes costs for food, clothing, shelter, transportation, and a category of other essential items.” the report states.

“Baskets have been costed out for 50 different regions across the country to take into consideration local standard of living costs. Disposable income is calculated by after tax total income, which includes government transfers, and deducts certain ‘non-discretionary’ expenditures.”

If a family cannot afford the basket for their region, they are considered below the poverty line.

The report argues that the MBM has limitations. For example, it does not apply to the territories or First Nations reserves in Canada because no baskets have been costed out for those regions.

The MBM is currently under review and an updated version is expected in Feb. 2020.

Although the numbers remain high, the report states that child poverty rates went down after the introduction of the Canada Child Benefit in the 2016 federal budget.

“In 2017, there were 145,730 fewer children living in poverty than in 2015, the year prior to the introduction of the Canada Child Benefit, reflecting a 9.7% decline in the poverty rate in that time,” the report states. 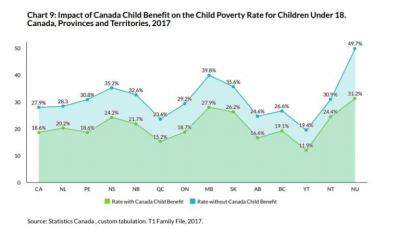 This graph shows the impact of the Canada Child Benefit on Canada’s child poverty rate.

In 2016, the Government of Nunavut also began exempting the CCB from social assistance assessments.

The Department of Family Services also told Nunatsiaq News it has been working with the federal government in their efforts to develop poverty measurement tools and indicators to ensure any tools adopted reflect Nunavut’s context and culture.

The full report can be found here.