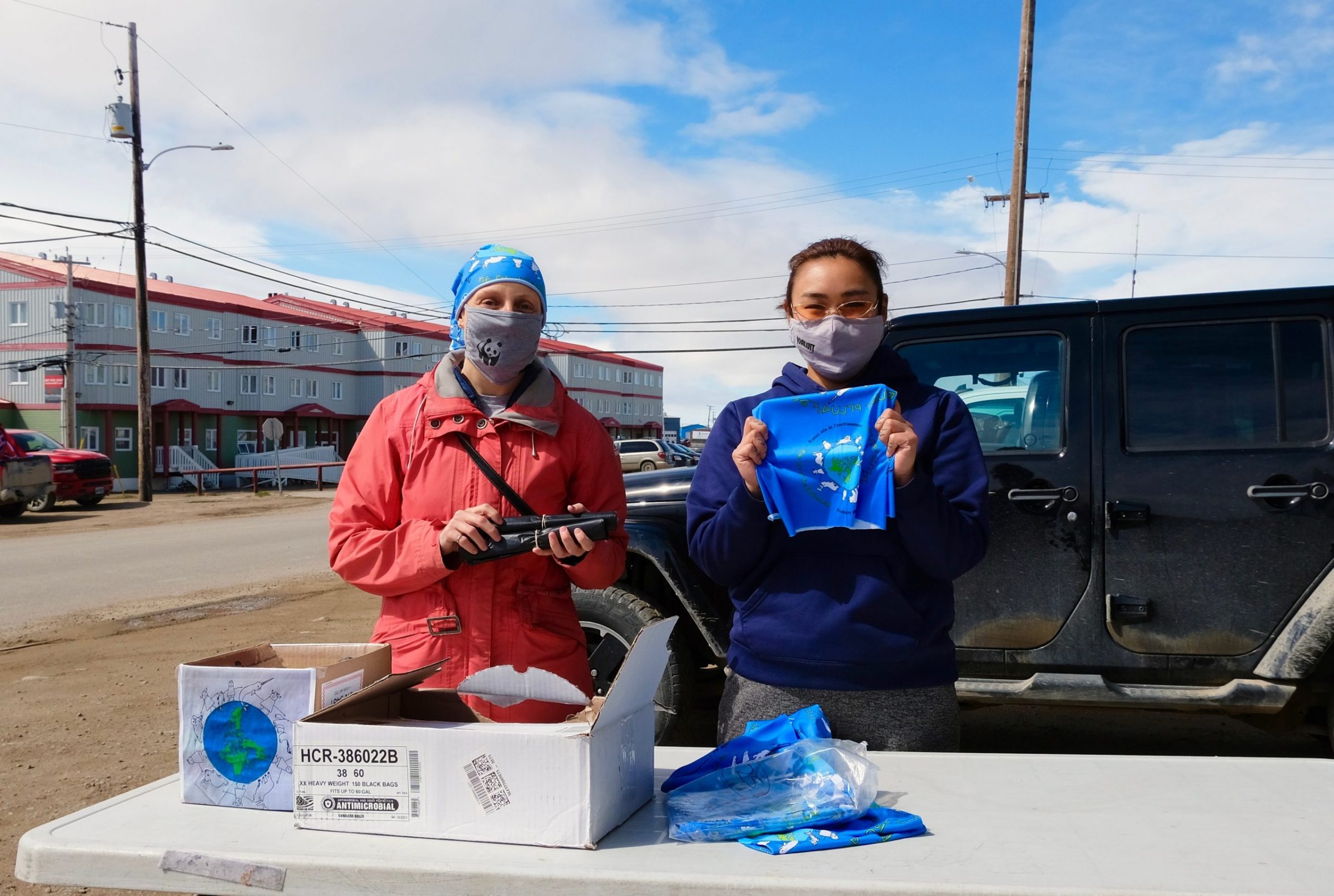 Four supply stations are set up around Iqaluit on community cleanup days to hand out gloves, garbage bags and other supplies. Martha Lenio, left, who works for WWF-Canada, volunteered at the booth outside of Iqaluit’s City Hall, alongside summer student Brenda Anderson, who is seen here holding up a neck warmer participants can nab for free. (Photo by Mélanie Ritchot)

With summer on its way to the Arctic, geese have returned to Nunavut, sealifts will soon be on their way stocked with supplies, purple saxifrage is blooming — and garbage is being uncovered by the melting snow.

Communities across the territory are taking initiative and picking up trash over the coming weeks to give the land a belated spring cleaning.

Iqaluit’s Brenda Anderson, a summer student working with Nunavut’s Department of Environment, has been handing out supplies, such as  garbage bags and gloves outside city hall for the first two of four weekly cleanups in Iqaluit.

“It is just so helpful to the community,” she said about those volunteering their time. “That’s what makes me happy.”

It is Anderson’s first year being involved in the community cleanup, but she said she is now planning to take part in the years to come.

Iqaluit resident Sateana Goupil, who takes part in the community cleanup every year, is pictured here picking up litter with his Qulliq Energy Corp. colleagues. (Photo by Mélanie Ritchot)

Sarah Arsenault, who works for Qulliq Energy Corp., took the afternoon to pick up litter with her coworkers for the third year in a row on Friday.

Last year, she said her group of four filled more than 30 garbage bags in one day, and she estimates they filled at least 40 bags one year ago, with a bigger group.

Arsenault said being involved in the community and seeing the results at the end of the cleanup are what keep her coming back.

“To have the streets cleaner, it’s really satisfying to see it,” she said.

By noon on Friday, dozens of garbage bags could be seen on roadsides throughout Iqaluit and Apex, ready to be picked up and brought to the dump.

The capital city is not the only community getting cleaned up, with others having completed theirs already, or waiting for the snow to melt to get it done. 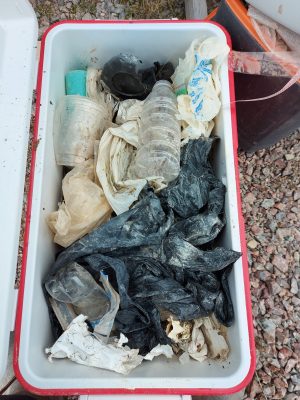 Helping out also comes with the chance to win a prize for some.

Rankin Inlet held its community cleanup on Wednesday, with a draw to win a grand prize of $250 in gift cards.

Pond Inlet’s cleanup is scheduled for Saturday afternoon with free ice cream for participants and prizes including gift cards, an iPad and more up for grabs, according to organizer Theresa Dalueg.

Last year’s total tally of 200 garbage bags filled by the community is the number to beat this time around.

The cleanup in Cambridge Bay will take place over two weeks, starting July 2, and Kinngait’s is ongoing until the end of the month, with free T-shirts and supplies being offered to participants.

Some people are taken things into their own hands.

Barry Iqalukjuak, who lives in Arctic Bay, filled two garbage bags with trash left behind near the sea ice and brought them back on a qamutik. Next, he said he plans to clean up the nearby land.

Baker Lake’s Lars Qaqqaq cleaned up litter at the local campground and fished plastic bags from the nearby water last weekend, while others cleaned out a local hunting cabin.

“I spend a lot of time on the land and care very much about keeping it pristine,” said Qaqqaq.