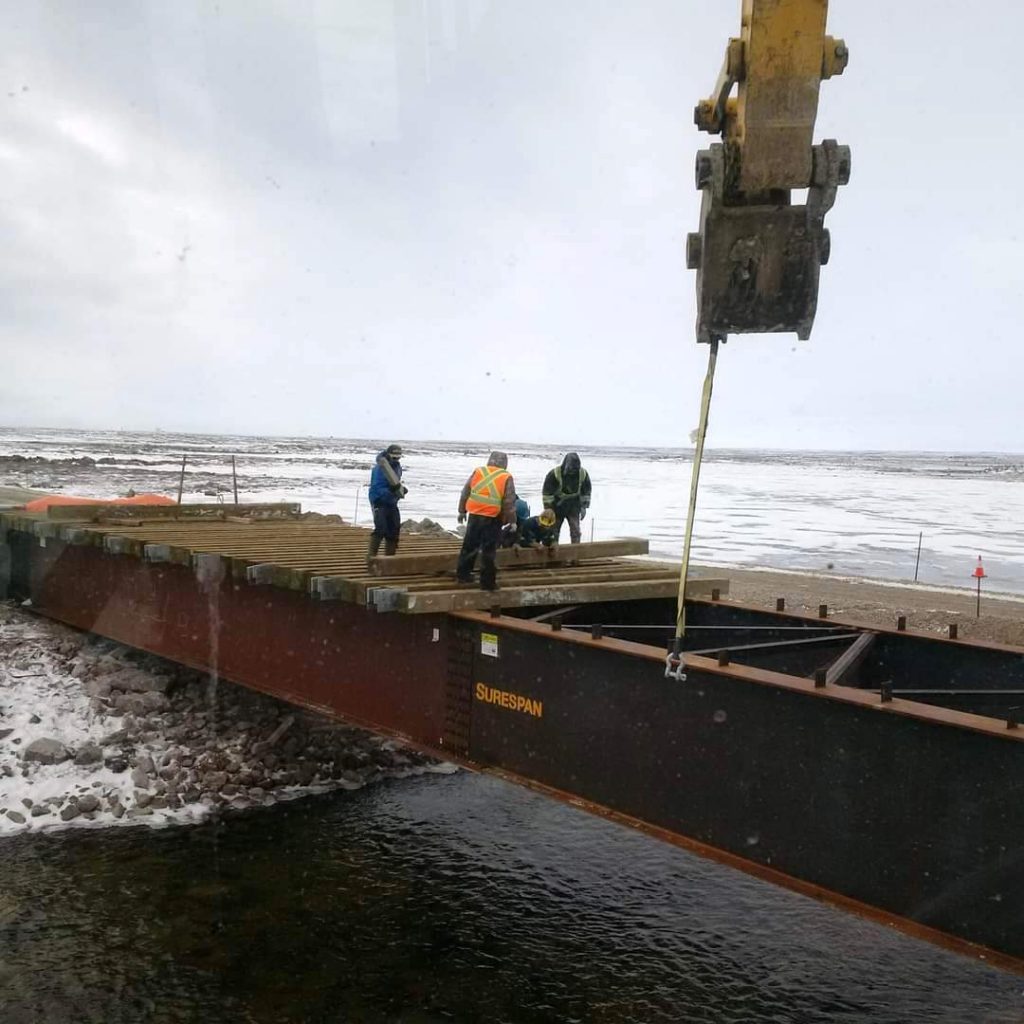 Workers from Sudliq Developments Ltd. in Coral Harbour work on a 2016 bridge project outside the Kivalliq community. This year, Sudliq, an Inuit-owned company, did not get a chance to bid on another bridge contract, although it did receive a subcontract for the labour portion of the 2020 contract (Photo courtesy of Dino Bruce)

A lucrative contract to build a bridge in Coral Harbour this summer went to a company outside the territory, much to the dismay of Dino Bruce, operations manager for Sudliq Developments Ltd., a local company that built three bridges around the community in the past.

The loss of this contract for a fourth bridge came as a surprise to Bruce, who said he learned only after the fact that the municipality had sole-sourced the entire contract outside the territory.

“With the experience and the manpower we have, when we found out the job was sourced out, you’re wondering what did we do wrong to not be given the opportunity to take on this job,” Bruce said.

On this summer’s bridge project, a company based outside Nunavut had provided the engineering design and ordered the materials.

“We had anticipated that the labour component would be tendered out, but the municipality ended up sole-sourcing to this company for the entire project,” Bruce said.

“It was very strange the way it came out,” he said, although Sudliq did receive a subcontract for the labour portion of the bridge work, he said.

As a subcontract, the job on the latest bridge did provide work to Sudliq’s 15 to 20 seasonal workers. 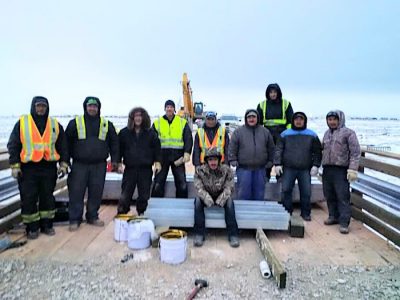 Some of Sudliq’s staff on the bridge they built in 2016: from left to right, Sandy Saviakjuk, Dino Bruce, Louie Bruce and Nathan Nakoolak. (Photo courtesy of Dino Bruce)

For them, even one week of missed work can make the difference on whether or not they receive employment insurance, Bruce said.

“It doesn’t just affect the seasonal workers, but their families as well,” he said.

The municipality and others in Nunavut are allowed to sole-source a contract through what Bruce called “a loophole” in the Government of Nunavut’s Nunavummi Nangminiqaqtunik Ikajuuti policy, which is supposed to give priority to Inuit companies when awarding contracts.

The NNI policy is supposed to uphold Article 24 of the Nunavut Agreement—an article that states Inuit firms should have priority over other companies competing for government contracts.

But section 4.3 of the NNI policy says municipalities are exempt from this policy, “so they can basically hire people at their discretion from wherever,” as Bruce put it.

“As long as the loophole is there for municipalities, our businesses will continue to [be] vulnerable,” Bruce said.

The Nunavut Association of Municipalities said the GN did provide a procurement policy template to municipalities a couple of years ago.

The policy suggests that sole-source procurement should be only used in emergencies when there is only one vendor that can supply the product or service.

But municipalities ultimately decide how they will conduct their procurement and comply with regulations, the NAM said.

According to the suggested procurement policy, “any sole source exceeding $50,000 will require a staff report to, and approval by council.”

When contacted, Mayor Willie Nakoolak said he could not offer any comment about the contract issue and what he or the councillors knew about the 2020 bridge contract, because he said he wanted to obtain more information first.

“I cannot and will not give any information in regards to the contract issue,” he said.

Exemptions to the competitive quotation or bidding process can be approved by the senior administrative officer of a municipality under certain circumstances, the NAM said.

The SAO of Coral Harbour, Leonie Pameolik, told Nunatsiaq News that the move to sole-source the bridge contract took place before she became SAO.

But she suggested the problem with using a local company might have been that there are no engineers in Nunavut.

But Bruce said there was no question Sudliq was able to carry out the bridge construction: if he didn’t have the engineering capacity needed on his staff, he would have subcontracted it out.

This is what he did with the three other bridges that Sudliq built around Coral Harbour in the past.

Sudliq, started by Bruce’s father in 1986, is primarily engaged in the transportation and construction industries. It also provides fuel delivery, snow clearing and cartage services.

“We have the staff and kind of equipment to undertake this kind of project,” Bruce said of this summer’s bridge construction. “We designed, supplied material and labour for this project in 2016.”

But he alleged this summer’s $1.7 million contract was handed out “under a cloud of secrecy.”

There was really no transparency at all, he said.

The Nunavut Agreement also offers some protections to companies like Sudliq.

Section 24.5.2 of the land claim agreement says: “Where an Inuit firm has previously been awarded a government contract, and has successfully carried out the contract, that Inuit firm shall be included in the solicitation to bid for contracts of a similar nature.”

And, in a sole-source contract, Inuit firms also have preference, according to Section 24.5.3: “In the absence of competitive bidding for government contracts, qualified Inuit firms will be given fair consideration.”

But Bruce said Sudliq wasn’t given any opportunity to bid on the job, although they had experience with big projects.

In this community of about 1,000 people, Sudliq is a major employer of Inuit.