On the cusp of an election, funding announcements fuel cynicism the government is trying to buy voters 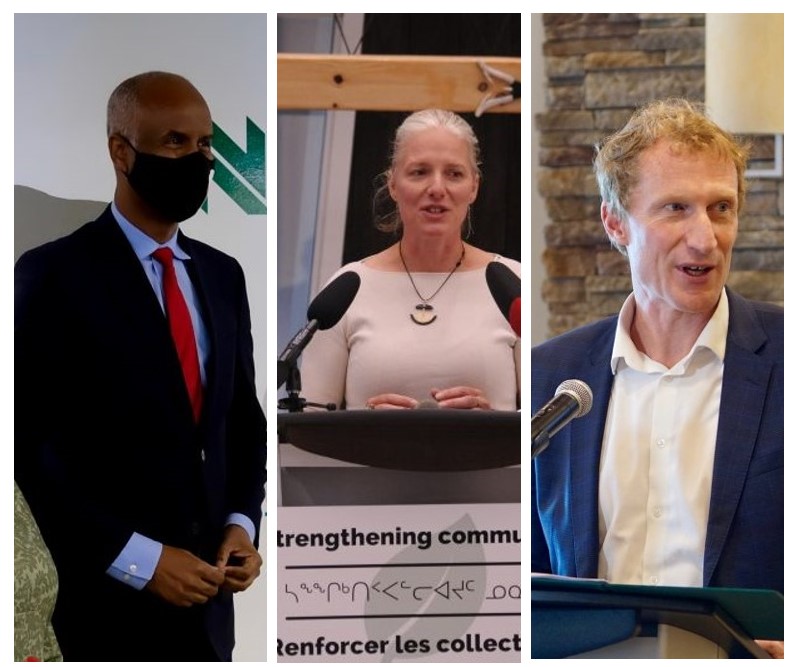 Three federal cabinet ministers have visited Nunavut in the past three weeks – Ahmed Hussen (left), Catherine McKenna (centre) and Marc Miller (right). With the possibility of a fall election, each of the Liberal ministers brought government funding announcements for the North. (Files photos by Mélanie Ritchot and David Venn)

Welcome to Iqaluit, where Liberal cabinet ministers have been deboarding airplanes like circus clowns piling out of a Volkswagen.

For the last few weeks, it feels like every time a flight touches down, another of Prime Minister Justin Trudeau’s emissaries pops out.

Three federal cabinet ministers have visited Nunavut recently, each with a good-news announcement about millions of dollars Ottawa is doling out to the territory.

In July, Indigenous Services Minister Marc Miller revealed the government will soon invite companies to bid on the construction of women’s shelters and transitional homes.

He was followed by Families, Children and Social Development Minister Ahmed Hussen, who is also the Minister Responsible for Canada Mortgage and Housing Corporation. (How do you fit all that onto one business card?) Hussen came to Iqaluit Tuesday to announce $10 million for Nunavut — enough money to build 24 new homes.

Housing, of course, will be a hot-button issue during the looming election, especially after NDP MP Mumilaaq Qaqqaq pushed it onto the agenda with her own report on housing. No doubt Hussen’s announcement was intended to take some of the sting out of Qaqqaq’s critique of housing conditions as “deplorable.”

And most recently, Infrastructure and Communities Minister Catherine McKenna hung out in Pangnirtung over the long weekend. Then she photo-op-bombed Hussen’s funding announcement on Tuesday, only for her own staff to send an advisory a few hours later that McKenna would be making one of her own the next day.

McKenna delivered more than $40 million for a deep-sea port in Qikiqtarjuaq to help the northern fishing industry. She also had more than $2 million to improve water or sewage treatment plants in five hamlets.

But the government was going to spend that money anyway. The approval of a $40-million deep-sea port doesn’t happen overnight. It had been in the works for months. So why now?

It’s a time-honoured tradition for federal ministers to spend their summers fanned out across the country, spreading the gospel of their good works. It hits a frenzy in the run-up to an election, as the government reminds voters of the good things it has done for them, and hopes the public will forget its missteps and forgive its broken promises.

But government spending on the cusp of an election just fuels cynicism and erodes public faith in government. In 2015, Trudeau vowed to do politics differently, but in this aspect, he’s acting just like every other government that has tried to buy voters with their own money.

There’s good reason for Liberals to lavish attention on Nunavut now. The riding will be a wide-open race whenever the next election is held because Qaqqaq announced in May she won’t seek a second term. The main reason for Trudeau to call a snap election is to break the minority government voters gave him in 2019. The only way to do that is to win ridings his party doesn’t already hold — like Nunavut.

Never mind the parade of cabinet ministers. If the Liberals want to woo Nunavut voters, they should get it together and announce a strong candidate and try to take back the riding.

Same goes for the NDP, Conservatives and Green parties. Only the NDP has made some noise about who its candidate will be.

So skip the transparent self-serving news conferences to announce funding for projects that were going to happen anyhow. Come up with candidates who will provide good leadership and give a strong influential voice for the people of Nunavut in Parliament.