Nunavut fashion and design come into their own

“I believe Nunavut has a big influence on Inuit art” 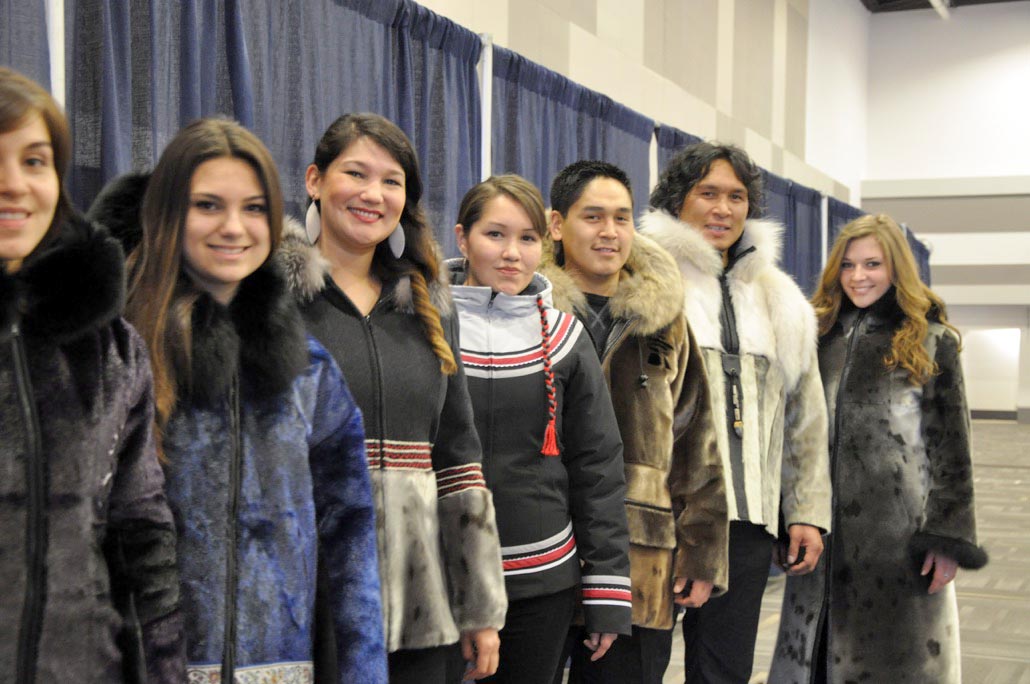 A lineup of models ready to hit the runway in Nunavut fashions at the 2014 Northern Lights trade show in Ottawa. (Photo by Sarah Rogers)

In 1999, the year Nunavut was born, Martha Kyak had already birthed a career in design—though she may not have known it then.

At home in Pond Inlet, the seamstress and artist worked full-time as a principal in the community’s school. In what spare time she had, Kyak sewed clothing for her children and relatives, illustrated books and ran a retail store called Kisutaarvik, selling fabrics and sewing supplies to the Baffin community.

A decade later, Kyak relocated to Ottawa, at a time when social media took hold in Nunavut communities and sealskin emerged as a fashion accessory. She started posting her work—parkas, clothing and accessories—for sale on Facebook.

Today, Kyak’s brand InukChic is seen on runways across the country; her pieces sell out as soon as they’re posted online or displayed at art shows. At a recent craft fair at Ottawa’s Winterlude, Kyak’s table was swarmed with interested customers.

“I sold so much stuff,” she said. “More people are looking to Indigenous work than I’ve ever noticed before.”

“People are really supporting Indigenous issues and any kind of art.”

Nunavummiut designers will tell you they’re having their own moment, built on a supportive network of Inuit artists from across the circumpolar world, but rooted in something distinctly Nunavut.

That “something” is hard to put your finger on, but Kathleen Nicholls with the Nunavut Arts and Crafts Association says it has earned Nunavummiut designers a “celebrity status” when they show their work in public.

Adina Tarralik Duffy, the creative force behind the Coral Harbour– and Saskatoon-based Ugly Fish, thinks there has been a renaissance in Nunavut design in recent years, fuelled by a reclaiming of Inuit culture. 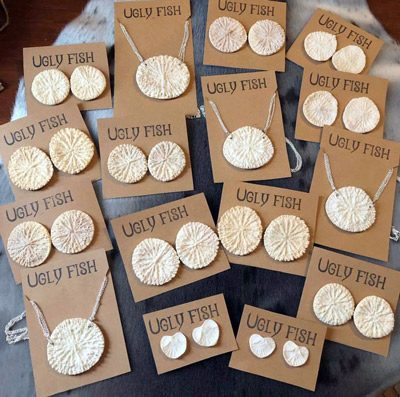 A selection of Ugly Fish’s iconic beluga vertebra disc earrings and necklaces that are ready to go on sale. (Photo courtesy of Ugly Fish)

“It’s an exciting time for design,” she said.

“Social media has changed the atmosphere—it’s so image driven. We all have so much to be inspired by.”

Artists from the territory continue to draw on cultural symbols, though Duffy believes artists are no longer anchored to the clichéd imagery of inuksuks and ulus.

In her own popular line of legwear, Duffy looks to syllabics and vintage cans of Spam for inspiration.

Nature continues to be many artists’ best resource. Duffy’s best-selling item, her beluga vertebra disc earrings, can be spotted on the lobes of Inuit women at work, on stage and on Instagram feeds. And her now-iconic creation happened rather by accident.

“The bones literally washed up at my feet,” Duffy recalled from a walk along the shore in Coral Harbour.

“I fell into branding by accident. There was an open door to brand.”

Kyak tells a similar story: her sealskin fringe necklaces were the result of a dress that split up the back while it was bring modelled, and Kyak’s quick fix.

Now the sealskin strips embellished with other beads and jewels—fur sreal, as she calls them—have become a staple in her collection.

“Inuit have always been very innovative in whatever materials they could find,” Kyak said.

That explains the movement back to sealskin in recent years, and its versatile use in jewellery, clothing and other accessories.

And that’s what sells, says Goretti Kakuktinniq, who works as a business advisor at Nunavut Development Corporation: organic accessories, made from materials like ivory, baleen, caribou antlers and sealskin.

At NDC, Kakuktinniq’s role is to both promote Inuit artisans’ work and purchase stock for retail stores in the territory like Ivalu, Kiluk, the Jessie Oonark centre and Uqqurmiut.

“There is so much art in Nunavut, but jewellery is what we move most, in my experience,” Kakuktinniq said. 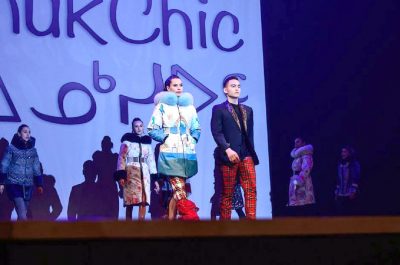 Martha Kyak’s parkas are modelled at an Indigenous arts and music show in Ottawa last October. (Photo by Evan Splett)

“If you’re an Inuk artist anywhere, you can move your product.”

Kakuktinniq said she used to buy items in quantities of 50; that’s now doubled to 100.

What that means is that more and more Inuit artisans are able to support themselves through their work—rather than just creating as a weekend hobby.

While jewellery is a hot commodity, clothing still holds an important place in Nunavut’s arts market and in the imagination of seamstresses.

Kakuktinniq won’t take any credit for her daughter’s success, but notes the role that seamstress Victoria Kakuqtinniq has played in modernizing Inuit women’s outerwear with her stylish, fitted parkas.

Victoria’s Arctic Fashion was invited to showcase her work at Paris Fashion Week in March, which represents a major platform for Nunavut art.

“People have so much imagination,” Kakuktinniq said. “And I believe Nunavut has a big influence on Inuit art.”

“When artists get together, they see each other’s work and get great ideas.”

Sarah Rogers is a long-time reporter with Nunatsiaq News.