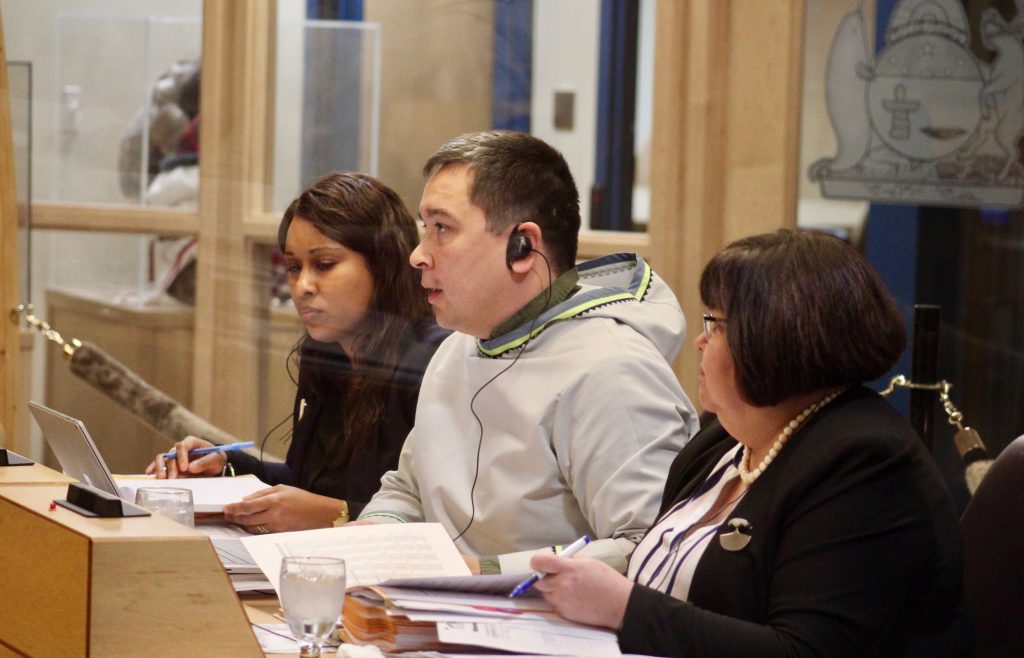 Nunavut Education Minister David Joanasie on Monday, Nov. 26, the first day of a public hearing held by the standing committee on legislation on Bill 25. He’s joined by Kathy Okpik, (right) the deputy minister of education, and Melissa Alexander, (left) the department’s manager of planning, reporting and evaluation. (Photo by Emma Tranter)

Did the Government of Nunavut adequately consult with affected groups as it prepared its latest efforts at education reform?

That question became the focus of the first day of the standing committee on legislation’s televised hearing on Bill 25, An Act to Amend the Education Act and the Inuit Language Protection Act.

The public hearing is part of the standing committee’s review of the bill. The public was invited to make submissions to the committee after Bill 25 was introduced during the legislative assembly’s spring sitting in June.

At this stage of the legislative process, the standing committee may propose amendments to the bill and will refer the bill back to the house.

In his opening remarks, Joanasie discussed his department’s public consultations on the Education Act and the Inuit Language Protection Act, which began in Sept 2018.

“We offered a set of proposed amendments to begin the conversation with Nunavummiut and we were eager to listen to their thoughts,” Joanasie said.

“We wanted to make sure everyone’s ideas and opinions from all 25 communities were heard. We felt that all Nunavummiut needed the opportunity to provide their feedback and concerns on changes to these two important pieces of legislation.”

Joanasie said the consultation team, with representatives from the Coalition of Nunavut DEAs and NTI, visited all 25 communities by Jan. 2019 and met with over 800 Nunavummiut.

In its written submission to the committee, NTI calls on the government to withdraw Bill 25 and proposes an alternative bill it has developed called the Nunavut Education Reform Act.

In her opening remarks to the committee, which she did not read directly from, NTI president Aluki Kotierk called again on the government to withdraw Bill 25.

“Despite our rights, including under Article 32 of the Nunavut Agreement, and despite consistent effort on our part, NTI was not engaged in the development of this proposed legislation,” Kotierk wrote.

Paul Quassa, MLA for Aggu, asked Kotierk to clarify what she meant by her statement, citing the department’s Sept. 2018 to Sept. 2019 consultation period.

“Our Inuit organizations have been involved in the engagement process,” Kotierk said.

But Kotierk said she felt NTI and the other Inuit associations were not involved in the writing of the bill itself.

“We had wanted to help in the laying out of the foundation… We had been asked only after the foundation had been laid out. We were welcomed to participate in the public engagements.”

Adam Lightstone, MLA for Iqaluit-Manirajak, also asked Joanasie how his department had engaged with NTI throughout the consultation phase of the bill.

“What opportunities was NTI provided in drafting Bill 25 as early as the legislative proposal phase?” Lightstone asked.

Joanasie said in Jan. 2019, the department heard from NTI through a written submission.

“Nunavut Tunngavik had expressed that they wanted to provide a written submission and provide their position,” Joanasie said.

“Why is it that NTI is unsatisfied that they have had an appropriate contribution to this legislation?” Lightstone asked, turning his question to Kotierk.

“I’m pleased that we were asked to engage. We did go to the meetings and at those meetings, it felt more like listening at the meetings without having a say, without a voice,” Kotierk said.

“We haven’t been working together as effectively as I would like to have seen,” she added.

After questioning from MLAs was complete, Joanasie crossed the room to Kotierk and the two hugged.

Next, Jedidah Merkosak, the chair of the Coalition of Nunavut DEAs, made a presentation.

In its written submission to the committee, the coalition also called on the government to withdraw the bill.

Merkosak was joined by the coalition’s executive director, James T. Arreak, and Lori Idlout of the Crawford law office in Iqaluit, a member of the Iqaluit DEA who’s acting on behalf of the coalition.

“We agree with NTI that there is an urgency to preserve and revitalize Inuktitut. We have read the Nunavut Education Reform Act prepared by NTI and agree at the very least that process is important. That partnerships must be implemented,” Merkosak said.

“NTI’s role is not just as an advocate. NTI is our land claim organization and is entrusted with the voice of Inuit when it comes to social and cultural issues. NTI and the coalition must have a role in improving education outcomes.”

Although Merkosak completed her presentation, MLAs ran out of time before they had finished asking questions of coalition.

Questions resume at 9 a.m. on Tuesday, Nov. 26, in the legislative assembly and will be followed by presentations from the Nunavut Teachers’ Association, the Gjoa Haven DEA, and the Iqaluit DEA.

The public hearing is scheduled to conclude on Thursday, Nov. 28.