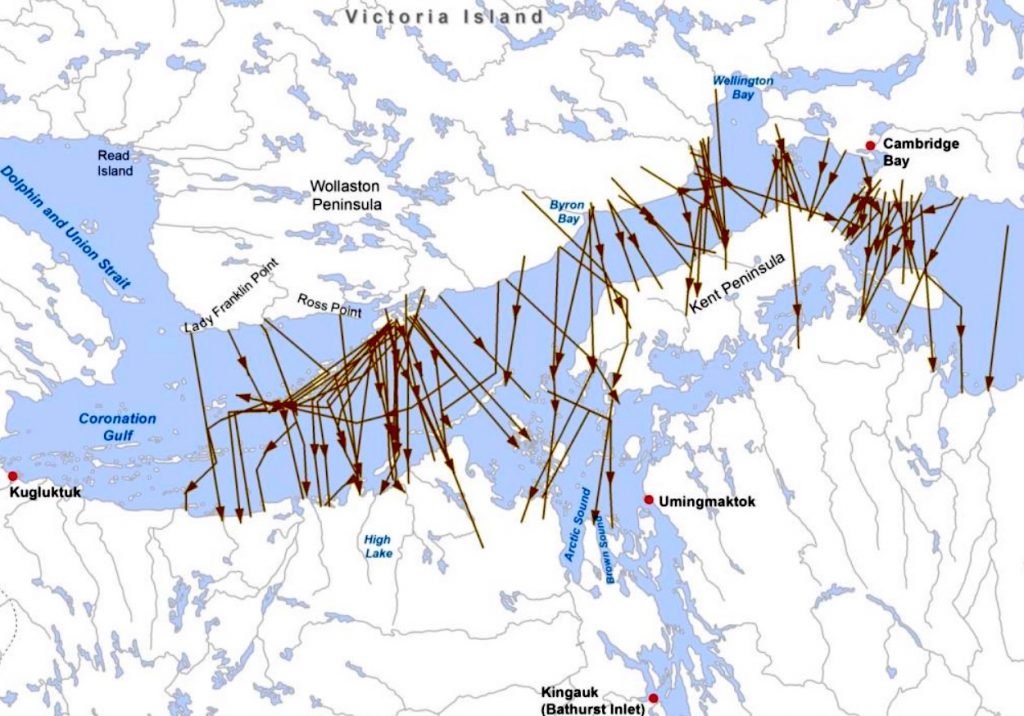 This map shows the Dolphin and Union caribou fall migration between Victoria Island and the mainland. The numbers of the herd are in “steep decline,” the Government of Nunavut said on Sept. 4. Concern about this decline prompted the GN to set a total allowable harvest of 42 animals this year. (Image courtesy of the GNWT)

The Government of Nunavut is restricting the hunting of the Kitkmeot region’s Dolphin and Union caribou herd through an interim total allowable harvest of 42, due to what it calls “a recent steep decline in the population” of the herd.

That decline has led to a “conservation concern” about the western Nunavut herd’s numbers, the GN’s Department of Environment said in a news release on Friday, Sept. 4.

Last year, the GN told the Kitikmeot Regional Wildlife Board that the herd had decreased by 34 per cent in eight years (4.2 per cent annually on average) from its 2007 population of about 27,800.

This interim total allowable harvest will be reassessed once formal consultations are completed, new information is reviewed, and updated recommendations are submitted to the Nunavut Wildlife Management Board, the GN said.

These HTOs are the Ekaluktutiak HTO, the Kugluktuk Angoniatit Association, the Omingmaktok HTO and the Burnside HTO.

Hunters will need a tag from their HTO before heading out to hunt, and tags will also be available for harvested caribou, the GN said.

The stocky, large-hoofed Dolphin and Union caribou usually spend their summers on Victoria Island and overwinter on the mainland.

But the animals’ migrations across the sea ice of the Coronation Gulf have become more dangerous in recent years, as the ice freezes up later in the fall and thaws earlier in the spring.

The growing amount of ice-breaking in the area has also been flagged as a major concern by wildlife biologists because the herd migrates across one of the routes through the Northwest Passage.

In 2016, the Committee on the Status of Endangered Wildlife in Canada reassessed the Dolphin and Union caribou herd as an endangered species.

A subsequent 2018 management plan for the herd said major threats include icing or freeze-thaw events, affecting access to forage; increased insect harassment and a rise in parasites and diseases; mining; roads; and competition from other species.

“Climate change is an underlying driver of many of these threats,” it said.

Aware of the dip in the herd’s numbers, hunters from Kugluktuk proposed the wolf-sampling program as a way of helping minimize the impact of predators on the caribou.