No date set for Iqaluit council to vote on proposal 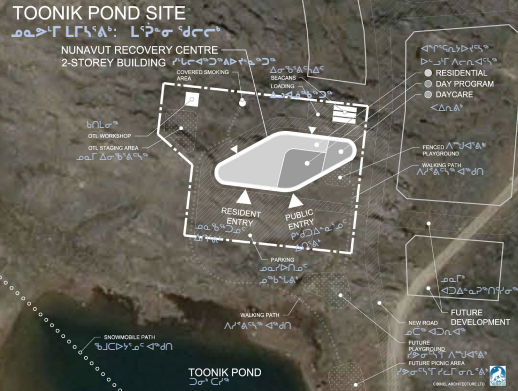 The proposed site for the Nunavut Recovery Centre is located just north of Toonik Pond on the Road to Nowhere. The plot of land is currently reserved for institutional use. (Map courtesy of the Government of Nunavut)

The Government of Nunavut pitched a location for its addictions and trauma treatment facility to the City of Iqaluit’s planning committee Tuesday.

The government is proposing the future Nunavut Recovery Centre be built on a 7,700-square-metre parcel of land already reserved for institutional use just north of Toonik Pond on the Road to Nowhere.

“There really wasn’t any ideal location available, presently, so we sort of had to look outside the box,” said Sofia Dobrev, senior facility planner with the Department of Community and Government Services.

There are still risks associated with the location, Dobrev said, such as the potential for sewage and water pipes to freeze up. She said the government plans to commission studies to avoid this.

The treatment centre will incorporate Inuit cultural values to help people recover from trauma and problematic substance use, said Victoria Madsen, director of mental health with the Government of Nunavut’s Department of Health, at the committee meeting.

Madsen said there will be gender-specific programs as well as programs for families and youth.

“We need to help all Nunavut communities with recovery from trauma and problematic substance use. And this will be an integrative approach,” said Madsen, naming some services that will be offered, like counselling, fitness, arts and crafts and traditional skill building.

If city council approves the land use, it will go to public hearing, according to the territorial government’s presentation slides.

In order to approve the land use, the department needs to request council vote on it, and that hasn’t happened yet.

“I’m unsure of their plans moving forward,” said Mayor Kenny Bell said about the department in response to questions about when a vote might be.

The Department of Community and Government Services did not respond to questions from Nunatsiaq News about when or if the department plans to request a vote.

The federal government pledged $47.5 million over five years for planning, designing and construction costs, and $9.7 million annually towards operating costs once it’s open.

The Government of Nunavut will cover the centre’s programs, maintenance and staff housing, as well as 30 per cent of capital costs for the construction of the facility.

And, over five years, the Makigiaqta Inuit Training Corp. will provide $11.85 million to fund an Inuit workforce that will provide consultation for the on-the-land healing camps, programs and treatment services.

The Nunavut Recovery Centre would be the first treatment centre in Nunavut since the Inusiqsiuqvik Treatment Centre in Apex closed in 1998.

By June, the government plans to issue a tender to design the facility. A construction tender would follow in the spring of 2022. Construction would start in the fall of that year and be complete by fall 2024.