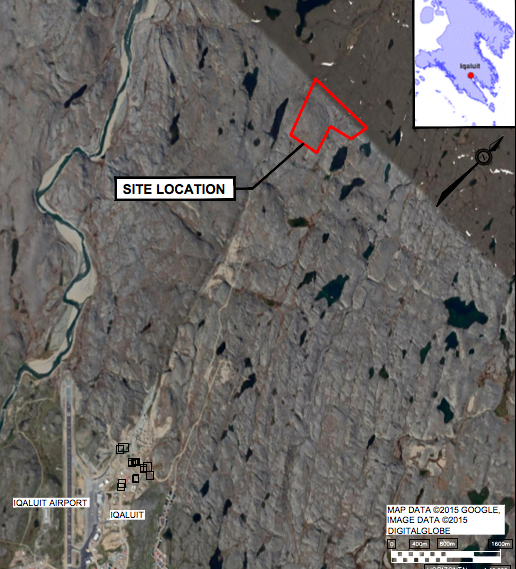 The City of Iqaluit needs to provide more information about the impacts a newly built dump could have on permafrost, climate and wildlife, Nunavut’s Department of Environment told the Nunavut Impact Review Board on Jan. 14. This image from an October geotechnical study shows the location of the landfill in relation to the City of Iqaluit. (File photo)

The Government of Nunavut says the Nunavut Impact Review Board needs more information to complete its environmental screening of the City of Iqaluit’s proposed new landfill and waste transfer station to be located about 8.5 kilometres northwest of the city.

That’s according to letters submitted to the board on Jan. 14, in response to the city’s long-overdue plan to replace the dump at West 40.

Those submissions—from Nunavut’s Department of Environment, Environment and Climate Change Canada and Crown-Indigenous Relations and Northern Affairs Canada—ask for more detail about how the city will combat climate change, protect permafrost and deter wildlife at the dump.

“Due to the presence of organics and other wastes the landfill will produce smells likely to attract wildlife including predators such as polar bears,” states the Department of Environment’s submission.

The city plans to put up an electric fence, and cut back on odour and floating trash by baling garbage at a waste transfer station to be built at an industrial area near the airport.

But, because the new landfill site is just four and a half kilometres from the Sylvia Grinnell River, one of the Department of Environment’s primary concerns is potential contamination to drinking water, and to a nearby fishing area where char is abundant.

“The Sylvia Grinnell River is of great importance to the people of Iqaluit through fishing, recreation, and drinking water. Contamination to this river would be severely detrimental to these activities,” the Department of Environment wrote.

The city’s proposal says that activities such as camping, fishing and berry picking won’t be interrupted.

The Department of Health gave conditional approval to the city in August, saying that the dump project could proceed with formal approval if the city sent more information on public health and sanitation measures.

“The Department of Health still requires the timely sharing of all technical documents and project specifications to verify conformity to the Public Health Act and General Sanitation Regulations,” the department’s submission said.

Environment and Climate Change Canada echoed the Nunavut government’s concerns over water contamination from toxic drain-off. Crown-Indigenous Relations and Northern Affairs Canada critiqued the city proposal over a lack of an oil-spill plan for heavy equipment used at the new dump.

The City of Iqaluit has until Jan. 30 to respond to these concerns through the impact review board.

Under the new waste management proposal, all wood and cardboard in Iqaluit will be shredded and used to heat the proposed waste transfer station. Shredded tires will be shipped south in containers, a compost area will be opened, and, a community “re-use” area will be set up.

The landfill will likely be designed to sit on top of the existing land, and “minimal excavation will likely be done to preserve the permafrost,” the city proposal said. “By upgrading this vital piece of community infrastructure, waste will be handled and disposed of in a clean and efficient manner, which is better for overall human health compared to a traditional landfill.”

The federal government committed $26.2 million to the landfill last summer. In addition to that, the city has earmarked $8.7 million for this purpose.

Built in 1995, the current city landfill at West 40 was only meant to serve Iqaluit for five years.

The site is renowned for a 2014 fire that cost the city more than $3 million to put out.

The new landfill has an estimated lifespan of 75 years.