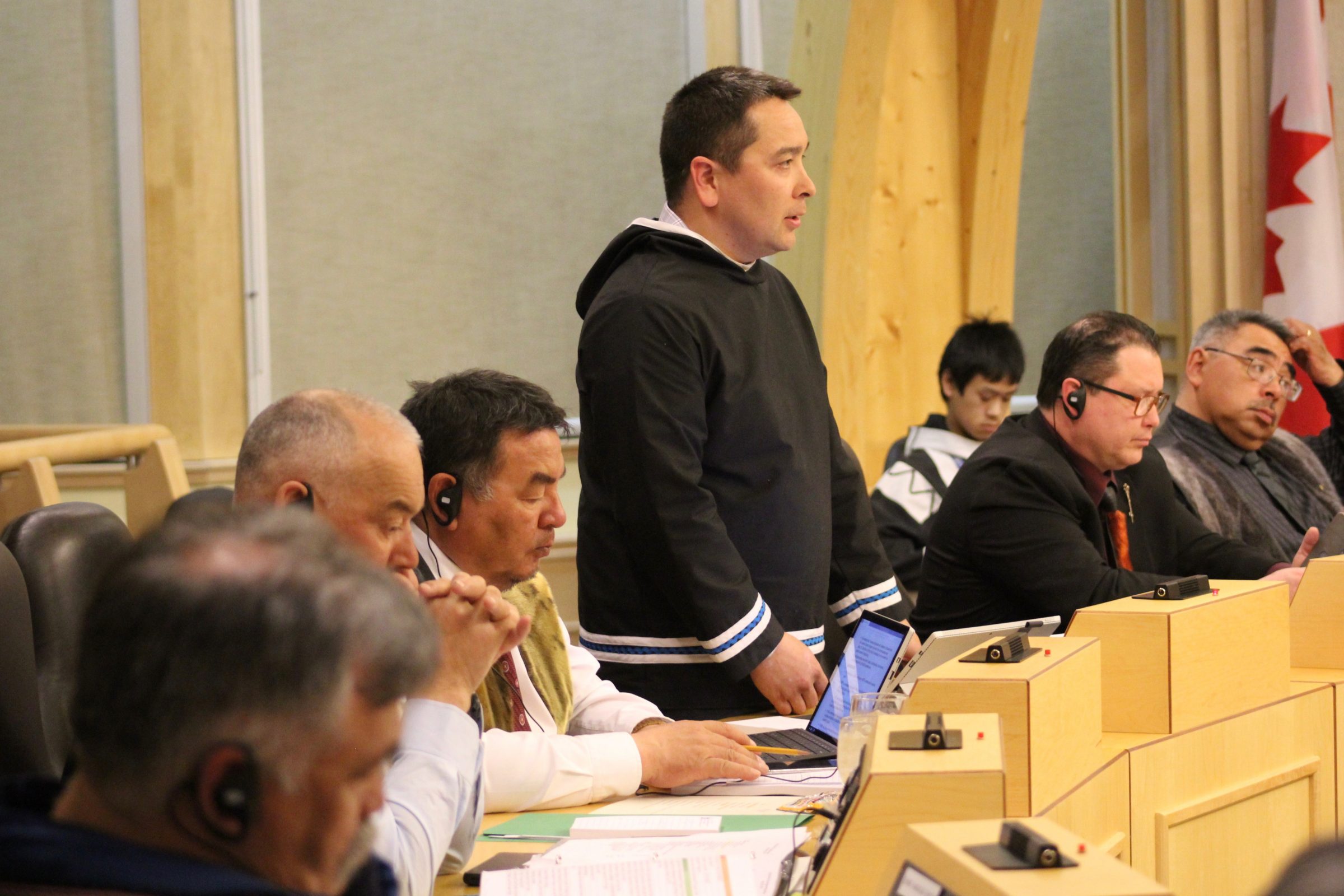 Nunavut Education Minister David Joanasie speaks in the legislative assembly in June 2019, when Bill 25 was introduced. (Photo by John Thompson)

Through written submissions to the government’s standing committee on legislation, several Nunavut groups have expressed their disappointment with Bill 25, An Act to Amend the Education Act and the Inuit Language Protection Act.

And some of those groups, like Nunavut Tunngavik Inc. and the Coalition of Nunavut District Education Authorities, have proposed amendments to the bill.

Those submissions will be discussed at an upcoming televised hearing of the standing committee on legislation.

The public was invited to make submissions to the committee after Bill 25 was introduced during the legislative assembly’s spring sitting in June.

In a letter to the legislative assembly, Aluki Kotierk, president of NTI, urged the government to withdraw Bill 25.

“We are willing, and keen, to work in partnership with the government and legislative assembly to refine the draft bill as may be needed,” Kotierk writes.

“Alternatively, if the government chooses not to respond positively to the draft NIEFRA, we urge other members of the legislative assembly to join together to bring about the tabling and review of the draft NIEFRA as a private member’s bill.”

The draft bill gives more power to district education authorities and tasks the minister of education with ensuring that all DEAs receive the “training and support required to enhance their capacity over time to take on increasing powers and duties.”

It also proposes that NTI and the minister work together to make Inuktut the working language of instruction from early childhood programs and kindergarten to Grade 12.

“The Minister shall, in partnership with Nunavut Tunngavik Inc, develop and implement a new timetable for phasing in Inuktut Language of Instruction from kindergarten to Grade 12,” the draft bill states.

NTI’s submission also calls on the minister to develop and implement a Department of Education Inuit employment plan and pre-employment training plan.

Coalition of Nunavut DEAs “beyond disappointed” with Bill 25

In a letter to the standing committee, Jedidah Merkosak, chair of the Coalition of Nunavut DEAs, calls on the committee to reject Bill 25.

“We have never been invited to an open conversation about legislation that would address our member DEA concerns, goals and priorities, or the possibilities we see in the Nunavut schools and community,” Merkosak writes.

“We are beyond disappointed. Bill 25 is basically a carbon copy of Bill 37.”

Bill 37, the previous bill to amend Nunavut’s education and language protection acts, was rejected by the legislative assembly in 2017.

In its submission, the coalition contrasts the rights and responsibilities invested in Inuit communities and the Inuktut language with those invested in the territory’s francophone community.

Merkosak writes there is a “huge inequality between language groups” in Nunavut.

The submission also proposes amendments to Bill 25 that mirror French-language legislation in Nunavut.

“Our approach is founded on confirming for Inuktut/English students, parents and communities rights equal to those available to the francophones in law in Nunavut.”

The submissions to the standing committee also include letters from the Representative for Children and Youth’s Office, district education authorities throughout Nunavut, parents and more.

Those submissions can be found here.

According to the standing committee, invitations to appear at the hearing have been extended to the following:

The televised hearing on Bill 25 is set to begin in Iqaluit next week on Monday, Nov. 25.