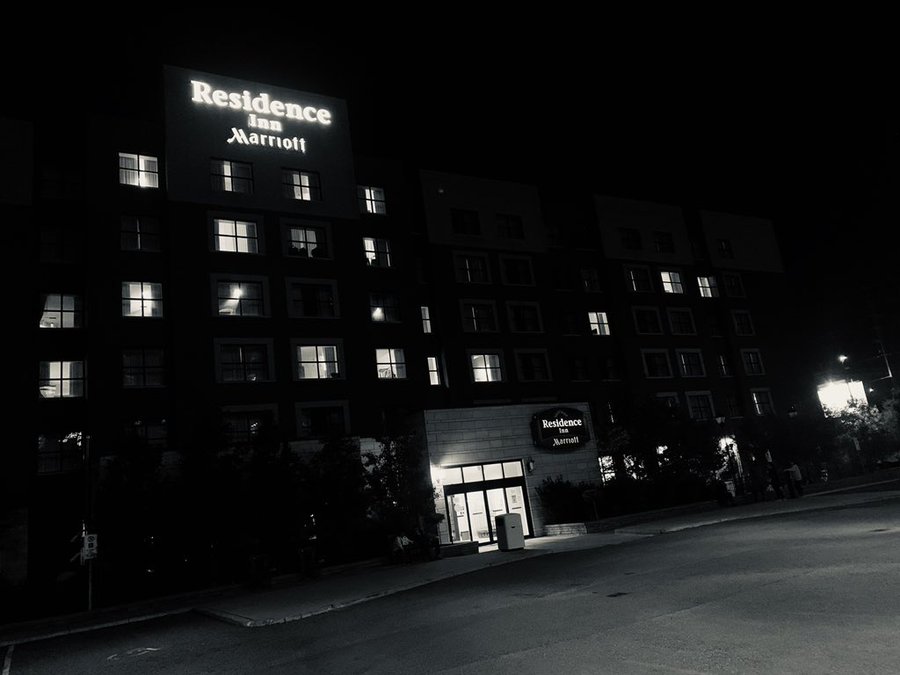 A moody night photo of the Residence Inn by Marriott at 1172 Walkley Rd. in Ottawa, where more than 1,200 Nunavut travellers have spent two weeks in isolation since April. Many have voiced complaints about the food. (Photo by Frank Reardon) 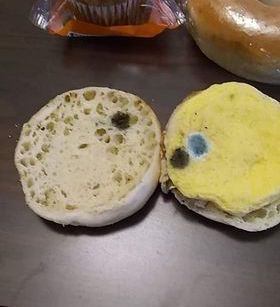 Here’s a photo of what greeted Emma Quassa for breakfast on Monday, Sept. 28. (Photo courtesy of Emma Quassa)

Like many Nunavut residents heading north, Emma Quassa of Igloolik is self-isolating in a room, alone, at the Residence Inn in Ottawa for two weeks.

Her isolation, the costs of which are covered by the Government of Nunavut, is part of the government’s effort to keep COVID-19 out of the territory.

But on Monday, her sixth day in isolation, Quassa said she got a bad surprise at breakfast when she opened up the box left outside her door that contained her morning meal.

“This morning I opened it,” she told Nunatsiaq News. “It was gross stuff.”

What she found inside the box was a mouldy egg and English muffin.

Quassa brought the boxed breakfast to the hotel’s reception desk where staff members asked if she wanted another one.

“I was hungry when I opened it, but I didn’t have an appetite anymore,” Quassa said.

The food is “the only problem here,” Quassa said, as the rooms are spacious.

The Residence Inn said in a handout to Nunavut travellers that the menu was designed by its executive chef and includes, among other choices, hot country food like caribou or Arctic char, three times a week.

But if you don’t select what you want to eat, you will get chef’s choice, cold, the handout warned.

Quassa is not alone in her complaints about the food service at the Ottawa isolation hub. These have surfaced on the Iqaluit Rant and Rave Facebook page where more than 60 people posted earlier this month about the food at the hotel.

“I ate things I normally wouldn’t eat because of hunger,” said a woman who had stayed at the Residence Inn. “I had no interest reheating any dish, microwaved greasy food is worse.”

About 1,200 have passed through the Ottawa hub to date.

A recent guest in isolation at the hotel shared a photo of a sandwich with Nunatsiaq News. While the sandwich looked like grey “mystery meat,” it was actually fish, she said. 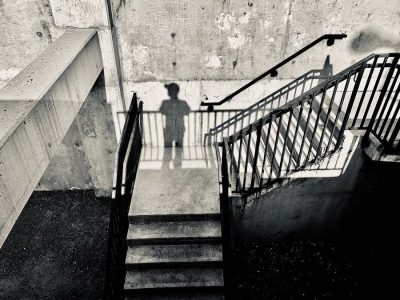 “Day #7 Quarantine—Isolation Abstract Black and White Photo, ‘Half Way There,'” is the title of this photo taken by Frank Reardon, which shows him in silhouette. (Photo by Frank Reardon)

Frank Reardon of Iqaluit, who is currently in isolation at the Residence Inn, told Nunatsiaq News that he had been passing on the delivered breakfasts.

Instead, Reardon, who is obliged to follow a gluten-free diet, received a box of food items that included gluten-free bread, yogurt and eggs for him to eat in the morning.

But despite telling the hotel that he needed to follow a gluten-free diet, Reardon said he receives daily wheat buns and other items he can’t eat at lunch and dinner.

Reardon has frequently posted about his menu during his stay in isolation on Twitter.

Day #4 Quarantine – My Gluten-free lunch today??? More wasted food ? This is Not Gluten-free. It’s day 4 and it’s Time for another chat with the hotel @ResidenceInn #FranksQuarantine2020 pic.twitter.com/G15k9sEdEr

He’s freezing all the buns he can’t eat for his kids, he said.

On Monday, Reardon decided to cook for himself for the next four days after he felt he had ingested gluten.

“I also told them I do not want wasted food,” he told Nunatsiaq News.

In other ways, in addition to the food, stays at the Residence Inn have not been smooth for guests: on Aug. 24 guests in the isolation hub had low-risk contact with COVID-19-positive guard and had to prolong their stay.

There have also been reports of unruly behaviour at the Ottawa hub and three other isolation hubs in southern Canada.

At about 9 p.m. yesterday, the police and first responders came to the Residence Inn in Ottawa, said Reardon: this was the third time over the past week that they had come to the hotel.

As of Sept. 21, 786 travellers heading to Nunavut were in isolation, the Government of Nunavut said.

Nunavut Health Minister George Hickes said Oct. 2 during a COVID-19 news conference that he had seen photos of the mouldy food.

“It’s unacceptable to provide mouldy food like that,” he said. “We’re working really hard to give people some options and provide country food.”

Hickes said his department has held meetings about the quality and delivery time of foods served at the isolation hub with the general contractor and the hotel manager.

“They have put in additional quality control measures to ensure this won’t happen again.”

On Wednesday, Sept. 30, the Department of Health responded in an emailed statement, saying the department would not comment on individual cases.

But it said the GN has been working with its service providers to address complaints from the isolation sites “as they arise.”

“All concerns with food are communicated with the hotel staff team. If a dietary restriction has been identified by a traveller, we do our utmost to ensure that the dietary requirements specified are met,” the Health Department said.

A team of government staff in Nunavut is working towards quality improvement at the isolation hubs, the Health Department said: “Our goal is to provide the most safe and pleasant guest experience possible while maintaining strict isolation.”

Guests who would like to submit a formal complaint should contact the Office of Patient Relations, the Health Department said.

Update
This story has been updated with the response from the Government of Nunavut’s Health Department, as well as updated information about the cost of a stay in isolation. It’s also been updated to include a response from Health Minister George Hickes.