From hitmaking pioneers to Toronto debuts, Nunavummiut shine in the performing arts 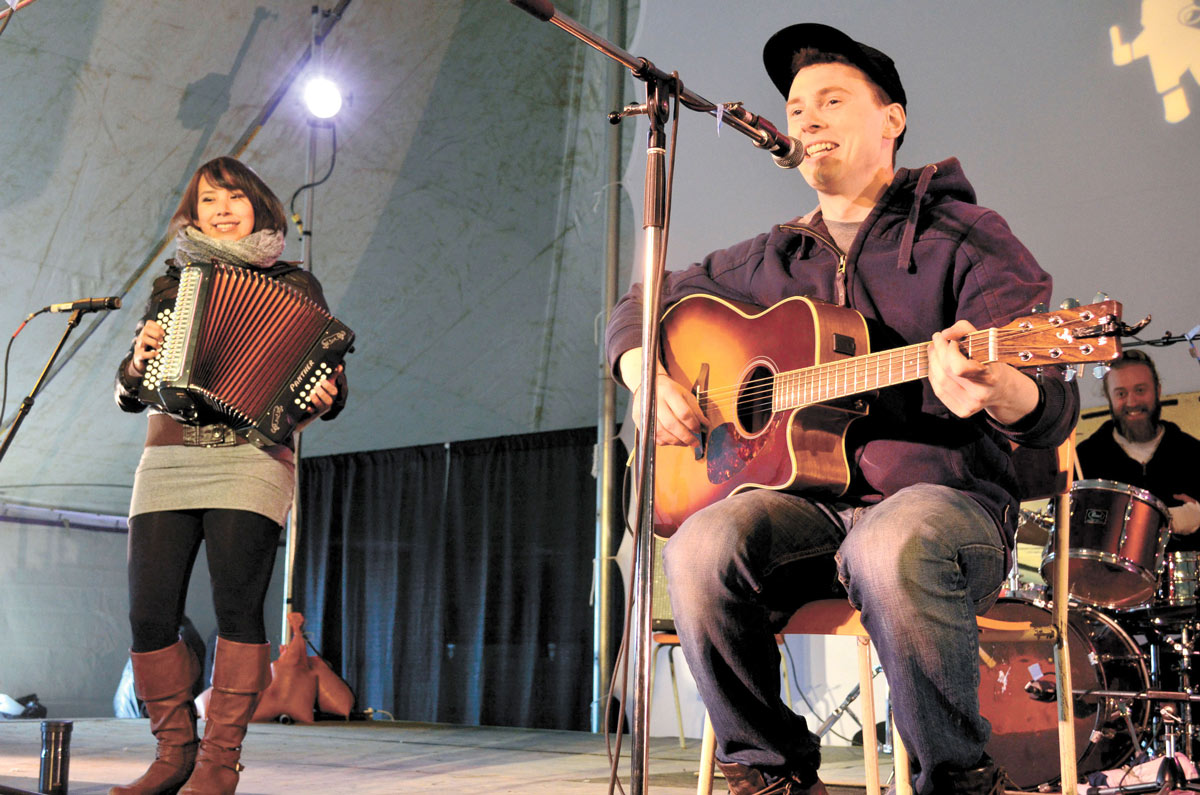 Nancy Mike and Andrew Morrison of the Jerry Cans performing in 2013 at one of the venues where they got their start: Iqaluit’s Alianait festival. (Photo by Jim Bell)

Try to remember the first-ever mainstream Inuk radio hit and, if you’re old enough, you’ll probably start singing, “O Siem, we are all family. O Siem, we’re all the same.”

Live performance and artistic expression have always been part of Inuit culture, and especially so in the past 20 years. But before Nunavut was a territory or even a settled land claim agreement, most Inuit performers such as William Tagoona and Charlie Panigoniak—though talented and beloved—were only famous north of 60.

And then came Susan Aglukark.

The daughter of a Pentecostal minister in the Kivalliq, Aglukark released her first album in 1990 and then seven more. She eventually earned three Junos, multiple other awards and distinctions and, of course, that chart-topping hit “O Siem,” from her 1995 breakthrough album This Child. She was the first bona fide mainstream Inuk pop star.

But the truth is, she had no idea who she was or what she was doing back then. She just knew something was haunting her and that music was a way to figure it out.

“I was in a real personal crisis,” said Aglukark, from her Toronto home, “and the more I wrote, the more I was awakening a call.”

A victim of childhood sexual assault, Aglukark’s awakening brought conflict, guilt and anger. “All it meant was that I was working through something and the picture was getting clearer of who I was.”

As the territory turns 20 this year, Inuit musicians, songwriters, actors, directors, dancers and singers are riding an unprecedented wave of growth and celebrity—both inside and outside Nunavut. 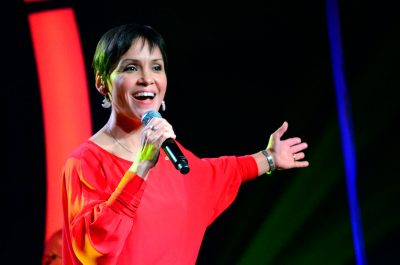 Triple Juno winner Susan Aglukark on June 22, 2013, when she performed at a National Aboriginal Day concert in Iqaluit. (Photo by Jim Bell)

But for every mainstream Inuk superstar such as singer– songwriter and genre-bender Tanya Tagaq, alt-rockers The Jerry Cans and internationally renowned filmmaker Zacharias Kunuk, there are scores of other established performers and young up-and-comers.

Take Kelly Fraser, born in Sanikiluaq around the time Aglukark was writing her first hit songs.

Fraser, a rising Inuk pop star and fan of Aglukark, became famous in 2013 after posting to YouTube an Inuktitut version of “Diamonds” by Rihanna—a video that has 336,778 views and counting. Her 2017 electronic and hip-hop album Sedna was nominated for a Juno.

But unlike Aglukark, Fraser, now 25, came of age during a time of political and social awakening for Inuit. And having studied Inuit and Indigenous issues in Ottawa and British Columbia, the young performer is quick to put names to the ghosts that haunted her: colonization, racism, suicide, family addictions, abuse, lateral violence and mental illness.

“This is what I want Inuit to understand: you can’t just sit and take it anymore. You can’t be unhealthy anymore. You have to actively try to get out of abusive relationships, out of abusive homes, even move out of your community to have a healthy body and healthy children,” said Fraser, from her Winnipeg home. “I get that we’ve had a hard time. But we need to actively get help.”

She quotes Métis hero Louis Riel when asked about the power of art: “My people will sleep for one hundred years,” he said, “but when they awake, it will be the artists who give them their spirit back.”

Nunavut artists have been busy proving that prophecy.

Qamaniq says the explosion of Inuit performing arts is happening, in part, because youth see more Inuit on TV and awards shows, at public events, in clubs and theatres, and they hear Inuktitut songs on the radio.

All of that exposure advertises and normalizes careers in the performing arts, making them seem possible, she says.

“It’s a great time to be Indigenous in general. There’s such a resurgence of cultural practices and a lot of importance being put on maintaining them,” said Qamaniq from Toronto where, in January, she was performing in a three-week run of the play Kiviuq Returns.

“People are paying attention to us. There’s a lot of awareness out there. There’s still a lot of ignorance but it’s nice to see how more aware people are, and I think the arts are helping with that.”

But talent and ambition are not enough, especially for Inuit in Nunavut where professional training, recording and touring are expensive and often unaffordable.

So Inuit are stepping up to pave the way. Organizations such as the Qaggiavuut Society and Nunavut Hitmakerz, as well as Aakuluk Music—Nunavut’s first homegrown recording label—have formed specifically to nurture performing arts in Nunavut.

Qaggiavuut, whose Qaggiq Project snagged a $600,000 Arctic Inspiration Prize in 2015, is dedicated to developing Inuit performing artists through training programs and mentorships. It’s also helping to build a dedicated performance space in Iqaluit, something that’s been sorely lacking for decades.

That performance space can’t come soon enough, says Aglukark, who sits on Qaggiavuut’s advisory board. Nunavut overflows with talent and mentors, she says. Inuit just need financial support to pursue their dreams and a professional stage in the North to showcase them.

Qaggiavuut’s executive director Ellen Hamilton told Nunatsiaq News they hope to put shovels in the ground for an Iqaluit-based arts centre this year, with possible completion in 2020.

In a territory dogged by the crippling remnants of colonization, residential schools and other traumas, creative pursuits such as theatre, stand-up comedy, dance, music and other forms of expression are thriving—not in spite of those ills but perhaps because of them.

Turning pain into art can be powerful therapy, say Nunavut performers—both for the artists themselves and their audiences. 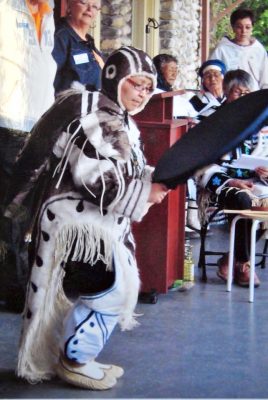 “There’s so much trauma in our communities,” Qamaniq said. “Art is very healing for pain. When you write and express yourself, when you perform for people, and when you’re just practising art, it does something to make you feel good on the inside.”

This is especially true for a show such as Kiviuq Returns, a contemporary, multi-media play based on elders’ stories, written by Inuit, rooted in Inuit folklore and performed entirely in Inuktitut.

By mid-January, after only a few performances at Toronto’s Tarragon Theatre, the play had received rave reviews in mainstream media. That’s not just because the play is exotic and unique—although it is those things.

It’s because it gives the audience what good theatre should give them, an engaging and entertaining show.

And while it’s important to showcase Inuit talent to southern Canadians, most artists will tell you it’s perhaps even more important for Inuit to perform for each other.

To that end, Qaggiavuut travelled across the territory last year bringing Kiviuq to the communities, so young people could learn the trials of the Inuk hero and join the performance.

Vinnie Karetak, who helped to create and co-direct Kiviuq, says theatre is a great way to pull youth out of shyness, re-engage them with traditional stories and put them on stage to bring those stories to life.

“When kids can pretend to be a superhero from Inuit folklore, it brings happiness and pride, something they didn’t have before.”

Karetak, star of the hit comedy series Qanurli, says the real proof that performing arts are growing can be found outside Toronto and Iqaluit, in small northern communities where children are learning to throat sing and drum dance; where they are picking up guitars and writing songs; where they are learning to beat box and rap.

“The tools we have now to tell stories are so great. Give us some space and we’ll create universes,” Karetak said, referring to a Nunavut arts centre. “Give us a place to call our own so we can do, not only the old stories, but our own, new stories as well.”

Until the Qaggiq is built, Nunavummiut will no doubt continue to explore what Aglukark calls a spiritual connection to the earth and to art, honouring both their ancestors and their children by keeping the beat going. 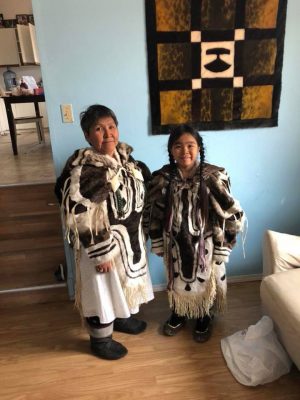 Veronique Nirlungayuk with her granddaughter Iqaluk, whom she is teaching to drum dance. (Photo courtesy of V. Nirlungayuk)

Veronique Nirlungayuk, the first-ever recipient of the Nunavut Commissioner’s performing arts award in 2013, is one such person.

When her father taught her to drum dance more than 40 years ago, it didn’t seem like a big deal.

One day during community games in Kugaaruk, her friend encouraged her to enter a drum-dancing contest—something she’d never done before—to honour her father who had passed away. She did, and she won gold.

“When I went on the floor in the gym, I went back in time. I felt like a child when he was showing me how to move. He was right beside me and I was following him around the circle. I was five or six years old again,” said Nirlungayuk.

“When I drum dance, I feel peace. I don’t know how to explain it. You feel the beat in your hand. It feels good. And when you’re moving the drum, it’s like you’re feeling the wind. The drum beat—it’s like following your heartbeat.”

Lisa Gregoire is a former reporter and managing editor with Nunatsiaq News. A journalist for 25 years, she now also writes fiction from her home in Ottawa. 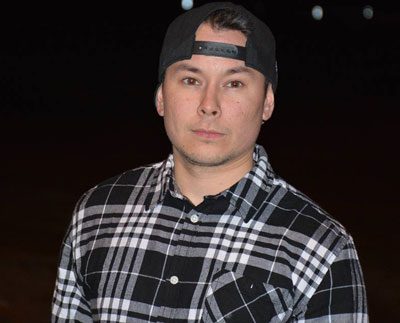 Rapper Hyper T is in the process of starting his own company, Hyper Inuk Music, to help produce other artists’ music and videos. (Photo courtesy of Hyper T) 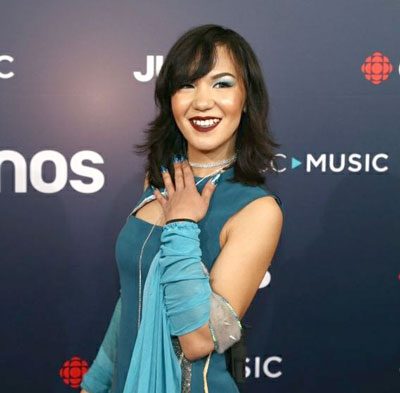 Kelly Fraser, a Juno nominee for Indigenous Album of the Year, poses for the paparazzi at the 2018 Juno Awards in Vancouver. (Photo courtesy of Kelly Fraser) 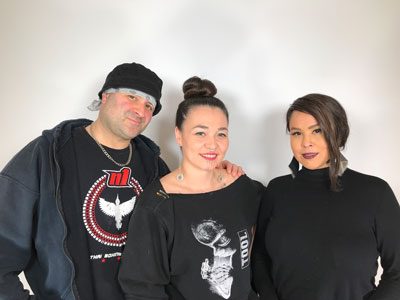