“The Government of Nunavut has a renewed way forward to tackle the housing crisis, but we can’t do it alone” 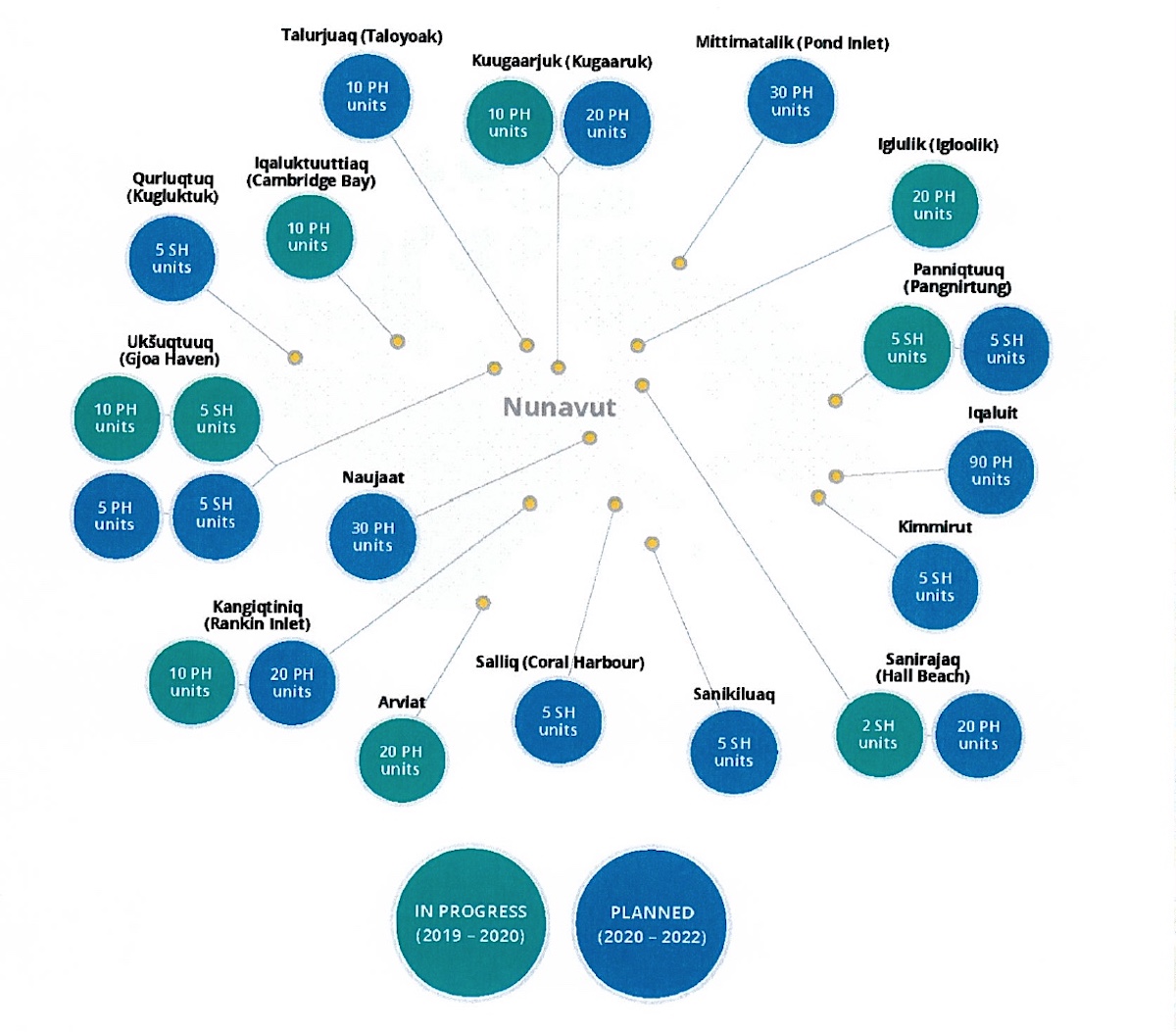 A new report from the Nunavut Housing Corp. says 3,545 households in the territory are still in need of housing. This diagram shows the public housing and staff housing units that are in construction (2019-20) and for which construction is planned (2020-22). (Image courtesy of the NHC)

Nunavut’s housing crisis remains dire and there’s not enough money to fix that, according to a new report by the Nunavut Housing Corp.

The report, tabled on Sept. 29 in the Nunavut legislature by Patterk Netser, the minister responsible for the Nunavut Housing Corp., said the current demand for public housing still exceeds what is available in all 25 communities.

This means there are an estimated 3,545 households in need of housing, said the report, “Angiraqattaaqtiaqtitsiniq: Helping find a good place to call home.”

“Even though the Nunavut Housing Corporation (NHC) maintains 5,582 public housing units and builds about 80 new units every year, this comes nowhere near meeting the demand,” the report said.

“This affects people beyond the lack of space. We know unsuitable housing is a significant risk factor for tuberculosis, another crisis we are fighting in Nunavut. We also know when families are able to move into suitable homes, they experience improvements to overall health and well-being, including reducing stress and asthma,” said the report.

Although some Nunavut communities and groups would like to see tiny homes built, the report said building five-plexes is “more economical right now than tiny homes and modular homes.”

As it stands now, each public housing unit costs about $26,700 a year to service and maintain, the report said.

But it acknowledged that “a key barrier to our progress is doing a lot with little—we need to keep managing our resources, capacity, and funding so that we can allocate housing options in a fair way.”

In tabling the report in the Nunavut legislature, Netser said that “while we continue to make steady progress on our housing action plan, there is still much more work to do. The Government of Nunavut has a renewed way forward to tackle the housing crisis, but we can’t do it alone.”

“Over the next nine years, we will continue making progress with the $265 million in funding from the National Housing Strategy and the $9 million Canada Housing Benefit from the federal government.”

Also in the legislature, on Sept. 21, Netser said construction projects across the North faced logistical challenges due to COVID-19 prevention measures, but that wouldn’t slow down the construction of new public and staff housing in the territory in 2020.