“There is a need for ice-specific response plans” 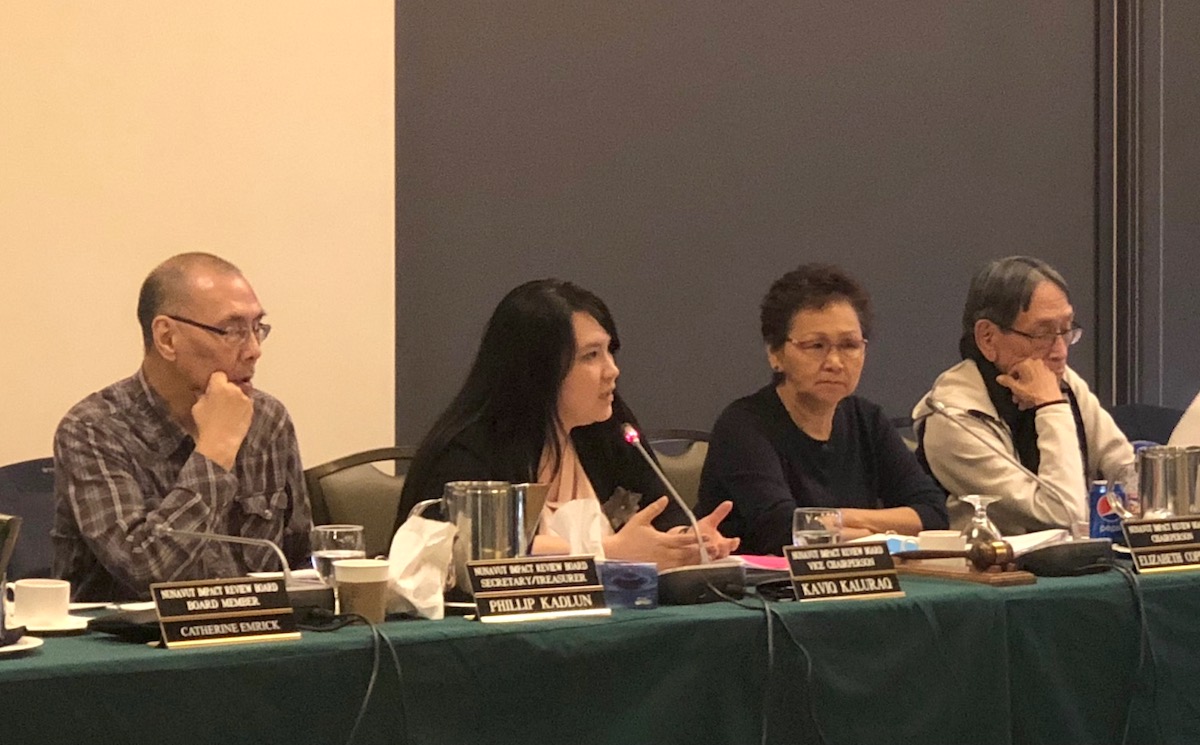 The Nunavut Impact Review Board’s nominee for chair, Marjorie Kaviq Kaluraq, asks the Nunavut Energy Board to provide information about how many people would be needed to deal with an oil spill. A discussion of responses to oil spills took place on Wednesday at the NIRB’s ongoing public hearing on oil and gas development in Baffin Bay and Davis Strait at the Frobisher Inn in Iqaluit. (Photo by Jane George)

Hunters from Nunavut’s Baffin region are calling for an extension of the existing ban on oil and gas development in the waters of Baffin Bay and Davis Strait.

Hunter and trapper organizations registered their concerns about how a potential oil spill could harm wildlife on Wednesday and Thursday, during week-long hearings held in Iqaluit by the Nunavut Impact Review Board.

Arctic Bay’s Ikajutit HTO has serious concerns about oil spills—”we know that oil spills on the ice are difficult to clean up, so there is a need for ice-specific response plans,” it said in its submission.

Pond Inlet’s Mittimatalik HTO has decided “we won’t support oil and gas development if it doesn’t take into account the impact of past oil and gas on marine activities.”

Resolute Bay’s HTO said it’s “very concerned about the possibility of oil spills and the impacts that a spill would have on the animals that we depend on for food.”

And Clyde River’s Nangmautaq HTO said that there isn’t enough research and baseline data or information yet on issues like oil spill response or climate change.

The Qikiqtaaluk Wildlife Board, which represents the 13 HTOs of the Baffin region, says it supports the HTOs’ call for the extension for the moratorium for another five years, until 2026.

The hunters’ calls were echoed by the World Wildlife Fund in its Thursday morning presentation delivered, in Inuktitut, by Paul Okalik, Nunavut’s former premier, who now works with the environmental organization as their lead Arctic specialist.

Okalik said the WWF believes Canada is not ready for any offshore oil and gas development in the eastern Arctic.

Among the reasons why: the capacity to respond to a major oil spill, which he said is “very poor, almost non-existent in some cases.”

Scientists, moreover, do not fully understand the potential impact of spills, as well as seismic testing, on marine life, Okalik said.

This puts Inuit food, culture and livelihoods at risk, he said. 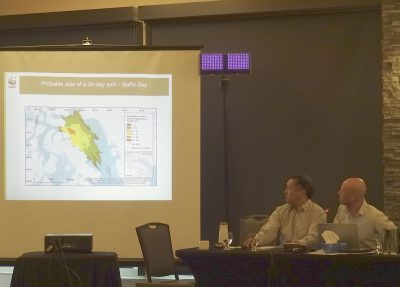 A World Wildlife Fund slide showing a worse-case scenario of an oil spill off Baffin Island generated a lot of interest at the Nunavut Impact Review Board hearing in Iqaluit. Speaking on March 21 to the gathering in Inuktitut, Paul Okalik, a former Nunavut premier who is now with the environmental organization, said the capacity to respond to a major oil spill is “very poor in Nunavut, almost non-existent in some places.” Like the HTOs, the WWF is calling for more research before any offshore oil and gas activity proceeds in Baffin Bay and Davis Strait. (Photo by Jane George)

Earlier this month, the region’s hunters announced that they won’t support preliminary studies into oil and gas development unless more “meaningful” consultation takes place with their Inuit communities about the impact offshore drilling could have on marine life.

These concerns were offered despite assurances from the Canadian Association of Petroleum Producers, which said that Nunavut has “high potential for safe and responsible oil and gas development in the future.”

By May 31, the NIRB is supposed to deliver its recommendation on the strategic environmental assessment, or SEA, of gas and oil development in Baffin Bay and Davis Strait to Dominic LeBlanc, the federal minister of intergovernmental affairs, northern affairs and internal trade.

This is expected to guide the federal government, which imposed a moratorium in 2016 on new oil and gas activities in all offshore Canadian Arctic waters that is scheduled to be reviewed in 2021.

For its recommendation, NIRB representatives said on Wednesday that they need more information from federal officials about spill response capability.

After a discussion devoted to the issue of spill response capability, the NIRB’s nominee for chair, Marjorie Kaviq Kaluraq, asked the National Energy Board to provide information about how many people would be needed to deal with a spill.

But that question didn’t receive an answer. That’s because such an emergency would have a “global response,” said Keith Landra, the NEB’s chief safety officer.

In 2015, a Transport Canada report said that Canada needed to improve its Arctic spill preparedness, response requirements and capabilities to be better prepared for a catastrophic spill in the Arctic.

On Tuesday at the hearing, the NIRB heard that climate change action could, in any event, make Arctic oil and gas “uneconomic.”

The Arctic Fishery Alliance has also told the NIRB that the Inuit-owned fishing industry should be protected over oil and gas companies.

More comments from the HTOs will be heard on Thursday afternoon, at community roundtables scheduled to take place the Koojesse Room of the Frobisher Inn.