“It’s a balancing act for all of us” 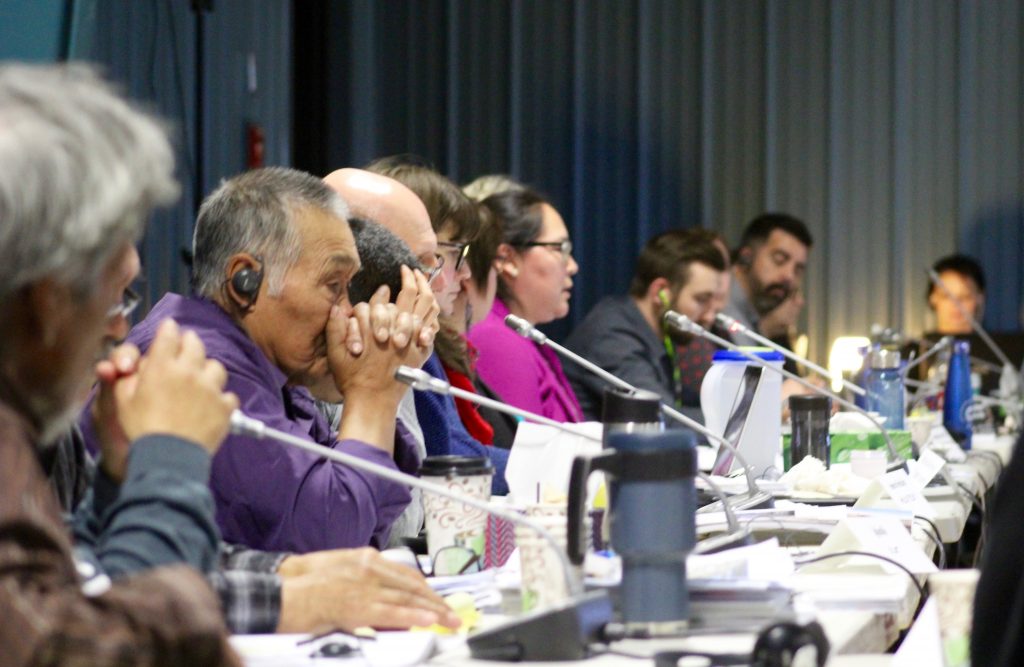 The Nunavut Impact Review Board cancelled the meetings planned for this week on Baffinland’s expansion plans because of concerns about the spread of COVID-19. The NIRB is trying to figure out how to reschedule the meetings in a way that suits all organizations involved. (File photo)

The technical meetings, community roundtable and pre-hearing conference were meant to be held from March 16 to March 25, in person, but were cancelled on Thursday, March 12, because of concerns about the COVID-19 virus.

These meetings are the next step in the assessment of Baffinland Iron Mines Corp.’s planned phase-two expansion of its Mary River mine.

The Mittimatalik Hunters and Trappers Organization sent out a letter in response to the change in format on the same day. It said that it was not consulted about the new format for the meetings, and that only the NIRB, the Government of Nunavut, the federal government, Baffinland and the Qiqiktani Inuit Association were involved in the decision.

Eric Ootoovak, the chair of the MHTO, said that the changes are concerning because telephone connections are sometimes patchy, and his organization could miss a lot if it tries to share information that way.

“The leverage would be in Baffinland’s favour,” Ootoovak said in a phone interview from Pond Inlet.

Baffinland is the proponent in this assessment. The large intervenors are the federal and territorial governments and the QIA.

Smaller intervenors are those that represent the communities affected by the mine’s activities, hunting organizations, and Oceans North and the World Wildlife Fund.

“I feel that we are being left out in these important decisions that they’re making without anyone else’s input. It almost is like they’re in favour of the proponent,” Ootoovak said.

Merlyn Recinos, the mayor of Igloolik and the technical adviser of the Igloolik working group to Baffinland, said that the decision by NIRB is inappropriate.

It’s a “capacity blockage” to ask communities to submit their concerns in writing, he said. Some communities are able to hire a technical advisor who submits written statements, but the rest rely on in-person meetings to give oral statements, he said.

Furthermore, Recinos said the new format assumes that communities will have the technology for the teleconferencing, as well as translators for both ends of the conversations.

“How are the communities going to express their concerns?” Recinos asked.

But Ryan Barry, the executive director of NIRB, said these concerns are overblown, and that the scheduled meetings had to be cancelled.

Barry said that the COVID-19 pandemic is rapidly changing, and while the NIRB said the rescheduled meetings would be held via teleconference, he does not yet know when this will happen.

The brief conference call that the NIRB had late last week with the governments of Canada and Nunavut, Baffinland and the QIA could hardly be called a meeting, he said, and it was not how the NIRB made its decision to postpone and change the format of the meetings.

In a letter sent out late on Friday evening to address the concerns of the MHTO and the Igloolik working group, among others, the NIRB said the intent of the call was to find out how these large organizations are being affected by the travel ban.

Barry said that many intervenors have already given written submissions related to the upcoming technical meetings, and just because the community roundtable has been postponed doesn’t mean it is cancelled altogether.

“We’re trying to make it clear that the community roundtable will be rescheduled at a later date,” Barry said. “We’re left trying to sort this out, just like everybody else.”

Barry said that the NIRB is in a challenging position—it wants the meetings to proceed “expeditiously,” but in a way that allows all parties to participate on an equal footing.

Barry said that the technical meetings and pre-hearing conference are just one step in the assessment process, and will not be used to determine whether or not Baffinland’s expansion plans go ahead.

There are still requirements for in-person community roundtables, and public meetings, Barry said.

As for Baffinland, Barry said that its concern is that the meetings continue to move forward. “There’s nothing to indicate that they’re going to pull out of the territory at this point,” he said.

The mine sent out a news release on Monday, March 16, asking workers who are Nunavut residents to stay home.

And, as of Monday afternoon, schools across Nunavut are closed for three weeks as a preventive measure against the spread of COVID-19. Barry said that this move will influence decisions on how and when the meetings will go ahead, because parents will be less available for meetings given that their children are at home.

An earlier version of this story said that Merlyn Recino is the chair of the Igloolik working group to Baffinland. In fact, he is the technical adviser.