“It’s loud and you can just feel and see everything” 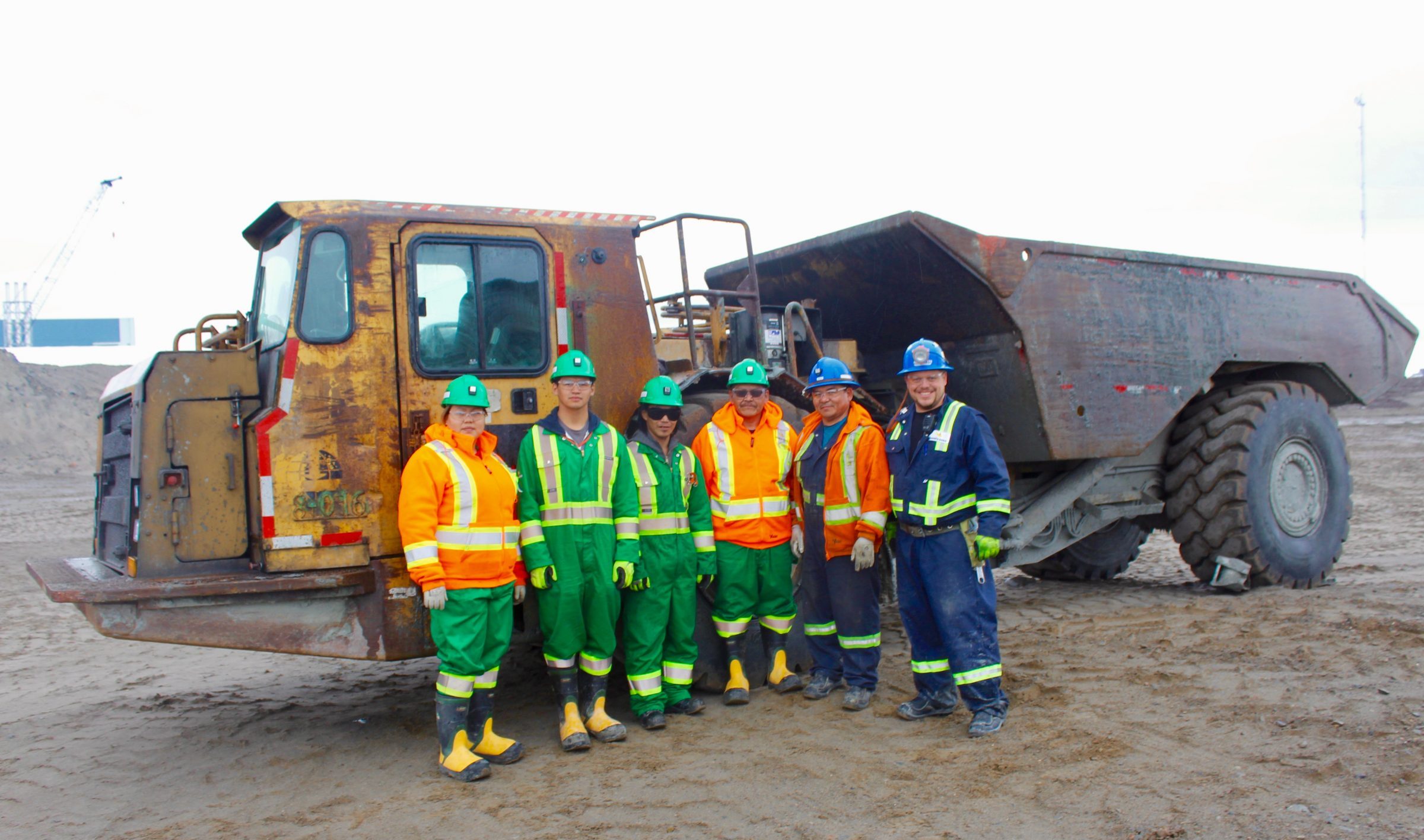 Pelagie Niviatsiak (far left), Randy Kataluk (second from left) and the rest of their training group pose in front of a small haul truck while training at Agnico Eagle’s Meliadine gold mine outside Rankin Inlet. (Photo by Emma Tranter)

MELIADINE MINE—Driving a mining haul truck through pitch-dark tunnels that stretch 450 metres below the surface isn’t for everyone. The job requires a steady hand and excellent navigation skills.

But Pelagie Niviatsiak of Rankin Inlet says it’s something she’s always wanted to do.

“It was kind of my dream when I was younger. So I reached my goal,” she said.

Niviatsiak, 20, is part of a group of Inuit training to become haul truck drivers at Agnico Eagle’s new gold mine, located just outside Rankin Inlet. The training program offered by the company takes four weeks and lots of trial and error.

“At first I was scared, I was like ‘what am I doing?’ But then as I started coming each day it was getting good and fun,” Niviatsiak said.

Nunatsiaq News recently caught up with the group two weeks into the four-week program.

Niviatsiak said it’s difficult to put her finger on what drew her to haul truck driving, but she has no regrets about her decision.

“I guess it’s just the feeling when you’re in the truck and you’re driving. It’s just different. It’s loud and you can just feel and see everything,” she said.

Right now, 20 per cent of Meliadine’s workforce are Inuit, according to the mine’s general manager, Martin Plante.

Agnico Eagle’s Inuit impact and benefit agreement with the Kivalliq Inuit Association sets an eventual target of 50 per cent.

The long-awaited mine, which cost more than $900 million in capital expenditures, officially began commercial operation in May 2019.

Randy Kataluk, 31, said he was encouraged to apply for a job at the mine by his friends back in Coral Harbour.

“Two of them said you should come work underground with us too. You’ve got to start somewhere and I thought what a good way to get your foot in the door,” Kataluk said.

Meliadine employees operate on a two-weeks-on, two-weeks-off basis. For Niviatsiak and others who live in Rankin Inlet, home is a 45-minute ride down the road.

But for Kataluk and others who live outside Rankin Inlet, home takes much longer to get to.

“It’s hard being away from family,” Kataluk said.

The group has moved beyond the classroom portion of training and is now learning to drive the trucks in an enclosed area outside, which is surrounded by sea cans.

“We were hitting sea cans all the time,” Kataluk laughs.

But that’s not the case anymore.

“We got the hang of it pretty quickly. I had never driven one before until I put my hands on the wheel. Now I’m very comfortable,” Niviatsiak said.

With only two weeks left, Niviatsiak said she wishes the group could continue to work together. But they will likely be assigned to different teams after they receive their official haul truck certification when the four weeks are over.

“The bad thing is we’re all going to be split up,” she said.