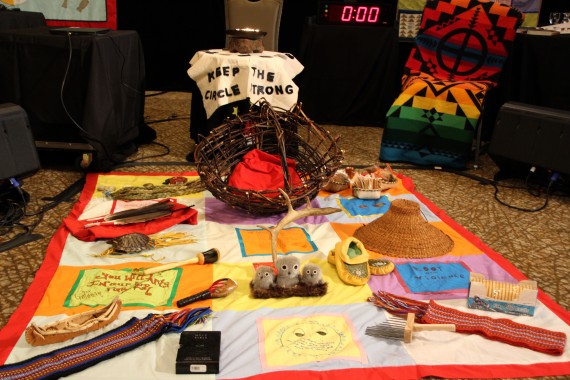 A quilt is displayed during a hearing in Iqaluit on September of the National Inquiry into Missing and Murdered Indigenous Women and Girls. A new report shows that a disproportionate number of women and girls were killed in Nunavut in 2018. (File photo)

Women and girls continue to be far more likely to be killed in Nunavut than in any other jurisdiction in Canada, according to a new report on femicide.

While Nunavut is composed of less than one per cent of the female population of Canada, the territory saw four cases of femicide in 2018. That makes for a rate much higher than in the rest of the country, of 21.85 per 100,000 women and girls.

Nunavut was followed by Yukon, with a rate of 5.31. All other provinces and territories had a rate of 2.08 and lower.

A woman is killed in Canada every 2.5 days, and that figure is higher when a victim is Indigenous or living in a rural or remote community, according to the report, called #CallItFemicide.

This has been a consistent trend for four decades, says the 78-page research report from the Canadian Femicide Observatory for Justice and Accountability.

The report also cautions that this is a conservative estimate, since there were nine other deaths of women and girls that were deemed suspicious by police.

As well, three other 2018 deaths were suspected femicide-suicides but have not yet been labelled as such.

Additionally, there could be undiscovered cases of femicide in the instances of women and girls who are missing and not yet located.

The CFOJA report also says, despite much more research on Canadian femicide over the last few decades, little has changed when it comes to how it occurs and why.

“Progress on prevention and on accountability has been slow to evolve. We have yet to meet the basic standard required to prevent these killings or to hold perpetrators accountable in a manner that would reflect widespread condemnation of these crimes,” the report said.

Indigenous women and girls were overrepresented as victims, as they have been since the beginning of this kind of research.

Additionally, about 34 per cent of women and girl victims were killed in rural or remote areas, where only about 16 percent of the Canadian population lives.

In about 11 per cent of cases, an accused killer died by suicide after the crime. All were male.

As well, in the instances where an accused person had been identified, 91 per cent were male.

In total, more than half of the 2018 femicide cases, 66 per cent, were perpetrated by intimate partners and male family members, the report says.

An additional 13 per cent were killed by acquaintances. So, in nearly 80 per cent of cases, the victim knew the killer.

The killer was only a stranger to the victim in 21 per cent of 2018 female homicides in Canada.

This is the CFOJA’s first annual report. It built its database on media reports of violence against women and uses the information available from the police—which can sometimes be lacking.

Out of all the 148 women’s and girls’ lives that were officially documented as ended by violence, there were 16 cases where no name was released to the public.

All of the woman and girls who were killed in Nunavut were listed as “name not released.”

That is one quarter of all of the unnamed cases in Canada.

Of all the unnamed cases, nine (56 per cent) involved Indigenous victims and an additional three victims are believed to be Indigenous, but that has not been confirmed officially, the report said.

On the list, only one of the Nunavut deaths is officially called Indigenous by the RCMP.

A section of the report focuses on the “increasingly common practice” of police services choosing not to release a name publicly after a death. The report calls this problematic, as this missing information could help researchers better determine how many femicide victims are Indigenous.

This trend of police withholding names of victims from the public and media has grown in just the last year, the report says.

Of the 16 unnamed victims, 13 were in northern or Indigenous communities that are policed by the RCMP.

Among the remaining three unnamed victims, the one in Flin Flon and the one in Kelowna were in areas policed by the RCMP.

The only unnamed case that was not handled by the RCMP was that of a 61-year-old woman who died in a fire set to her condo building. Montreal police believe the fire was deliberately set by three men.

As well, the CFOJA researchers found that Indigenous women got the least amount of daily news coverage when they died.

There were two cases of officially documented Nunavut femicide in Iqaluit in May 2018, according to the report.

Then in June last year, there was another case in Taloyoak.

In October, a 17-year-old girl in Igloolik was killed.

None of them had their names released to the public or the media.

There was one case of femicide in Nunavik in 2018—and regional police did release her name.

The victim was not Indigenous.

Call It Femicide by on Scribd