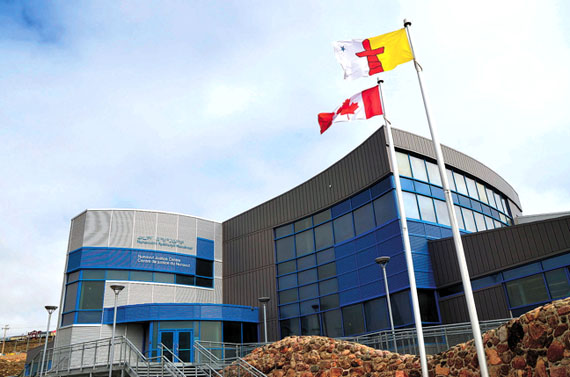 The Nunavut Court of Appeal is expected to deliver what could be a landmark decision after hearing an appeal in September in the case of Peter Kingwatsiak, who was convicted of murder in 2016 in the 2010 death of his step-brother. Lawyers for Kingwatsiak say his language rights were violated during his trial because of “serious inaccuracies in the interpretation” between Inuktitut and English. (File photo)

The Nunavut Court of Appeal heard what could be a landmark case last month about Inuit language rights in criminal court proceedings.

A three-judge panel heard arguments in an Iqaluit courtroom Sept. 21 in the case of Peter Kingwatsiak.

Justice Bonnie Tulloch convicted Kingwatsiak of first-degree murder in 2016 for the killing of Kingwatsiak’s step-brother, Mappaluk Adla in Kinngait in 2010.

Those language rights are protected under the Canadian Charter of Rights and Freedoms and under Nunavut’s Official Languages Act, Crowe argued.

Numerous issues around interpretation arose at Kingwatsiak’s trial because of dialectical differences between Kingwatsiak and the interpreters.

Crowe argued these issues resulted in Tulloch misunderstanding evidence, which resulted in a miscarriage of a justice, according to court documents.

Crowe also argued that Tulloch was wrong to conclude that Kingwatsiak was a non-credible witness while testifying in his own defence.

That’s because Tulloch used inaccurate interpretations of Inuktitut and also used “unfounded stereotypes” to come to her conclusion, Crowe said.

Kingwatsiak elected to testify in Inuktitut but has some fluency in English as well. He corrected the interpreters’ English and Inuktitut translations a number of times during trial.

“He deliberately slowed down the proceedings so that he could carefully consider what his answer to the question should be, rather than answering in a forthright and non-evasive manner,” Tulloch’s verdict said.

Crowe submitted a report by linguistic experts who said there were “serious inaccuracies in the interpretation” at trial and that Tulloch “aggravated rather than alleviated.”

For example, her finding that his testimony lacked credibility based in part on his pauses before answering is, “at the very least culturally insensitive,” the expert report said.

But Crown prosecutor Philippe Plourde called the credentials of the two experts who authored the report into question.

Neither expert has any legal training nor conducted any original research in Nunavut, while one of them lives in Paris, France, Plourde argued.

Even if their status as experts is accepted, Plourde said Kingwatsiak’s constitutional language rights were not violated.

Kingwatsiak demonstrated his proficiency in English at trial, Plourde said, pointing out that for part of his testimony Kingwatsiak chose to use Inuktitut interpretation only for individual English words he did not understand.

Plourde said Tulloch always made sure Kingwatsiak was satisfied with any changes in interpretation.

Therefore there was no misunderstanding of evidence and no miscarriage of justice, Plourde concluded.

Plourde also pointed out that the Official Languages Act of Nunavut only guarantees Inuit language rights in civil court, not criminal court proceedings.

Criminal court does facilitate this right, but is not bound by it, Plourde argued: “Although the OLA speaks only to the entitlement in civil proceedings, the practice is facilitated in criminal proceedings in the Nunavut Court of Justice.”

The third ground of appeal that Crowe argued was that Tulloch incorrectly assessed the evidence of Kingwatsiak’s ability to form the intent to murder.

That argument is based in part on Tulloch’s assessment of Kingwatsiak’s state of mind.

At trial Kingwatsiak testified that he had huffed gasoline fumes a number of times leading up to the incident.

But Plourde pointed out that only one witness at trial corroborated Kingwatsiak’s claim, and that witness only noticed gas fumes on Kingwatsiak after spending a couple hours with him after the homicide.

The three-judge panel made up of Justices Kevin Feehan, Frederica Schutz and Karan Shaner have reserved their decision until a future date.