Nunavut mine goes into “lockdown” to reduce risk of COVID-19 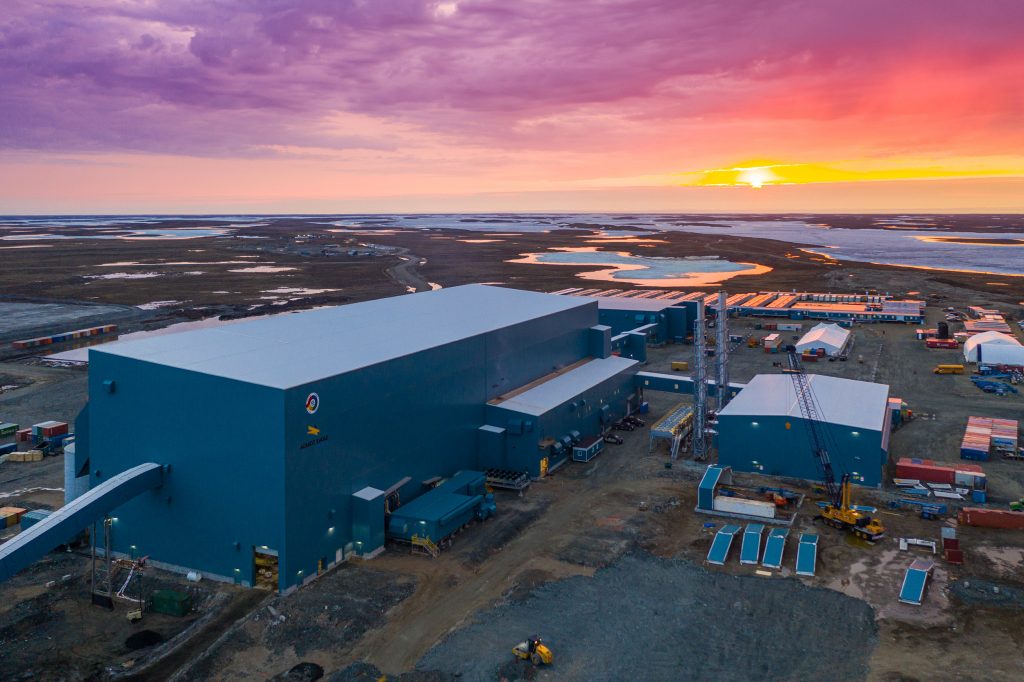 Agnico Eagle’s Meliadine gold mine outside Rankin Inlet is going into “complete lockdown” on March 28 to help prevent the possible spread of COVID-19, the company says. (File photo)

Agnico Eagle Mines Ltd. says its Meliadine mine in Nunavut is in “complete lockdown” for the next 28 days, with no movement of personnel except for emergency situations, to help prevent the potential spread of COVID-19.

The measures, which take effect on Monday, March 30, were announced by the company following a social media uproar created by an employee of one of the mine’s contractors who made dismissive remarks about the mine’s efforts to screen for the new coronavirus.

That’s although the company told Nunatsiaq News that the measures had already been decided on beforehand. 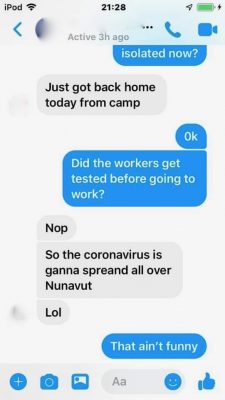 These are the comments that angered many in Rankin Inlet who have been worried about the spread of the new coronavirus into their community of about 3,000. (Screen shot)

The spark for this weekend’s renewed outrage was a widely circulated exchange between an employee of Outland Québec-Tangmaarvik, which supplies kitchen and catering services at Meliadine, and a Facebook friend.

The employee said that he had just returned from the mining camp and that he had not been tested for COVID-19, “so the coronavirus is ganna spreand all over nunavut lol..”

The contractor has since fired the employee.

Agnico Eagle had already taken measures at Meliadine and at its Meadowbank complex near Baker Lake to separate Inuit communities from its southern employees, and it sent home its Nunavut-based workers to help address concerns about the potential spread of the new coronavirus.

But many in Rankin Inlet, located 20 kilometres from the Meliadine mine site, continued to worry about the traffic in and out of the mine from Quebec—even after Nunavut said transient mine workers were not subject to the quarantine measures announced on March 23.

Some Rankin Inlet residents recently blocked access to the road that leads to Meliadine over concern about exposure to COVID-19 from southern workers.

And in Baker Lake there was chatter on social media last week that mine employees were still out and about in that community, 110 kilometres from Meadowbank.

As anger over the social media post grew over the weekend, Outland Québec-Tangmaarvik issued a statement on Sunday saying it wanted to apologize for the “inappropriate comment regarding COVID-19 made by one of our employees and posted on social media.”

“Operating in collaboration with Agnico Eagle Mines, we are aware and well informed of all the preventive measures that were implemented from the start to prevent COVID-19 on Agnico Eagle sites in Nunavut.

“I want to assure you that the company has taken this matter very seriously and disciplinary action has been taken as a result of this violation of our Code of Ethics and social media policy.”

“The mines need to shut down completely, (my constituents have told me,)” she said. “We need to keep ourselves safe from this scary virus. No joke.”

To date, Nunavut has no confirmed case of COVID-19.

To keep it that way, after its Nunavut workers returned home, Agnico Eagle had put in an increasing number of preventive measures at the airport to ensure that workers coming from the south would not be in contact with Rankin Inlet residents.

Starting on March 30, no crew changes will occur at Meliadine over the next 28 days, the company said. On April 27, “the situation will be reassessed,” it said.

Only days ago, Agnico Eagle had decided to reduce activities at its Meliadine and Meadowbank gold mining operations in Nunavut after Quebec ordered a “pause” on all non-essential businesses during the COVID-19 crisis.

Changes to working schedules also start on Monday. These will result in only four passenger flights per month to Meadowbank instead of the regular four times per week.

During the reduced production period at Meadowbank, everyone required on site will now be switched to a 28-day on, 28-day off work schedule, the company said.

A similar rotation is also now in effect at Baffinland’s Mary River mine.