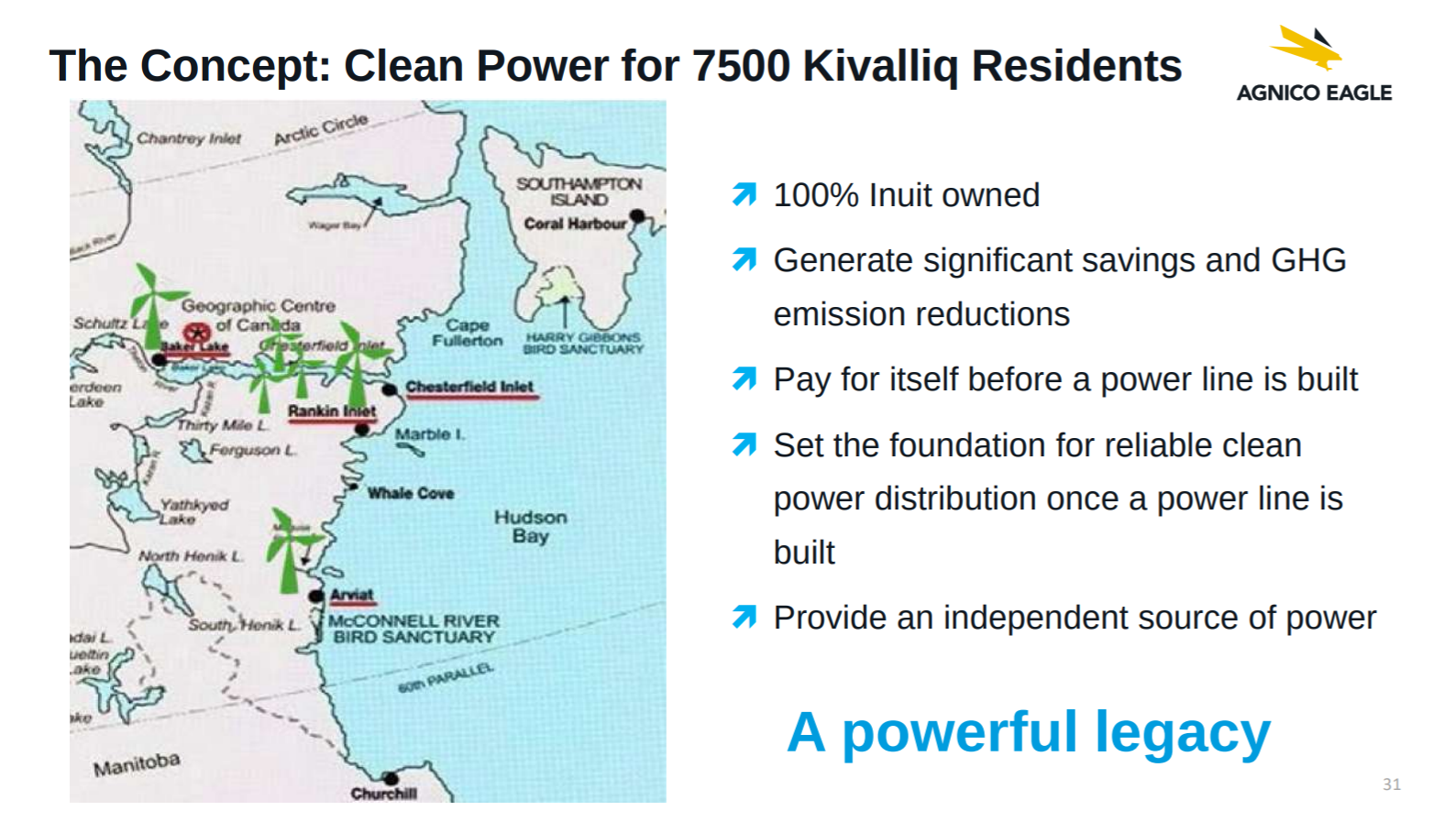 This map shows how Agnico Eagle wants to build a series of wind farms to help power its Nunavut mines and nearby communities in the Kivalliq. It’s from a presentation the company gave to the Senate’s Arctic committee in September.

Agnico Eagle Mines Ltd. wants to build a series of wind turbines to power its Nunavut mines and several nearby Kivalliq communities.

And it wants these projects to be paid for with its contributions to the federal carbon tax, along with an additional contribution from Ottawa.

The company made this pitch to Canada’s environment minister, Catherine McKenna, in a letter sent this past September.

The letter was tabled in the Nunavut legislature on Tuesday, May 28, by Cathy Towtongie, MLA for Rankin Inlet North-Chesterfield Inlet.

She homed in on the company’s concerns about the financial burden of paying a carbon tax, when operating a mine in Nunavut is already much more expensive than elsewhere in Canada.

Agnico Eagle expects to pay $48 million in carbon taxes over the life of its Nunavut mines and says that these additional costs “will significantly limit our ability to invest in the region.”

Towtongie asked Finance Minister George Hickes what the Government of Nunavut is doing “to ensure that the federal carbon tax does not unfairly disadvantage this vital sector of our economy.”

Hickes replied that Nunavut’s mining companies will get a break under the federal carbon tax’s output-based standards.

“They take a reduction, which is approximately 40 per cent off the top for mining companies,” he said.

“The federal government has listened to us on realizing how important of an industry that is to Nunavut and has made some further exemptions within the carbon pricing model.”

Agnico Eagle’s letter doesn’t object to paying the federal carbon tax. But it wants to see its tax contributions flow into an “individualized trust account” that would help pay for its envisioned clean energy project.

As things stand, all carbon tax funds collected in Nunavut are expected to flow into the territorial government’s coffers.

Agnico Eagle bills its project as “the world’s largest renewable energy micro-grid.” It would, according to the company, provide green energy to 7,500 Inuit, or nearly one-quarter of Nunavut’s population.

It also would lower annual greenhouse gas emissions by over 1.5 million tonnes, and reduce the cost of electricity in three Nunavut communities by more than half, according to the letter.

“This proposal will accelerate the decarbonization of Nunavut and usher in a new era of cleaner energy in Canada’s North,” the letter states.

Agnico Eagle is proposing that the wind farms would be fully Inuit owned.

The company doesn’t see these interconnected wind projects as a substitute for building a power line to connect the Kivalliq to Manitoba’s electrical grid. Instead, it says “the micro-grid would form the starting point for a distribution network within Kivalliq and be complementary to a future power line.”

But “to be economically viable this project would require the financial support of your government—through direct or indirect project financing,” the letter states.

It’s not clear how much the envisioned energy project would cost, or how much money the federal government is being asked to contribute.

The company did offer some additional details in a presentation to the Senate’s Arctic committee in September.

It is said in the presentation that the wind farms could be built in three to four years, and that the same technology is currently being used in similar northern environments.

It is also asserted in the presentation that the project “pays for itself” through lower electricity costs “and would deliver jobs and revenue to the community.”