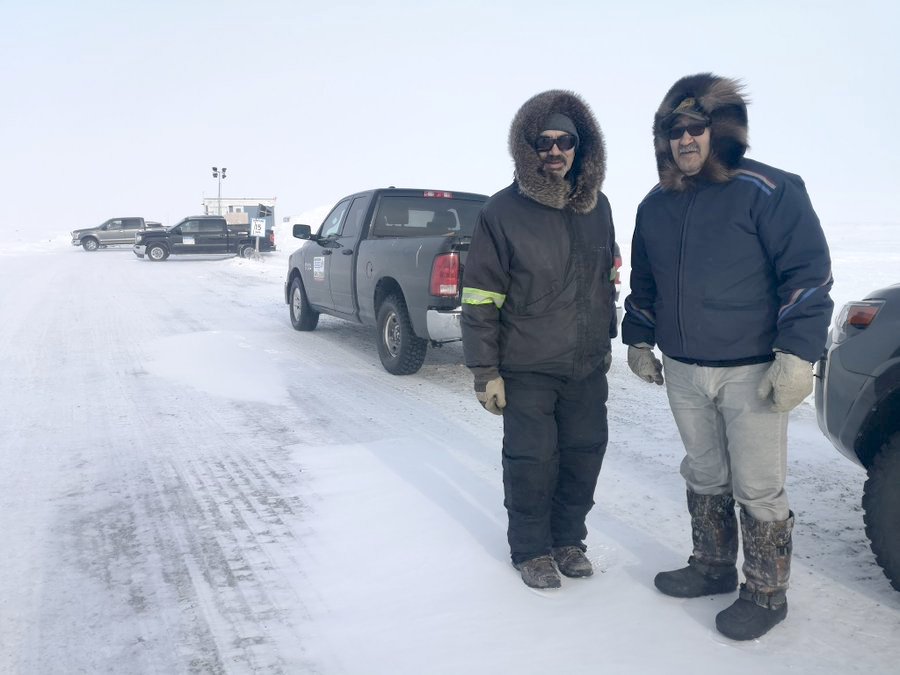 Rankin Inlet Mayor Harry Towtongie and Kivalliq Inuit Association President Kono Tattuinee stand by the checkpoint where trucks blocked the road to Agnico Eagle’s Meliadine gold mine. “People have to work and life has to go on. Life is going to go on and has to go on. One side of me thinks everything should shut down for a while, that the North should shut down for a while, and there is this other part of me that we need to keep this place where people go to work,” Towtongie told Nunatsiaq News. (Photo by Noel Kaludjak/Twitter)

Agnico Eagle reminded all employees to practice self-isolation for 14 days after they return home.

Nunavut’s chief medical officer, Dr. Michael Patterson, said on Friday afternoon that he’s satisfied with the company’s precautions and will allow its mines to continue to operate.

“I have reviewed the plans and preparations of Agnico Eagle Mines, and it is my belief that under the current circumstances their working arrangements do not represent a significant risk of spreading COVID-19 to the residents of Rankin Inlet,” Patterson said in a news release issued by the Hamlet of Rankin Inlet.

There have not been any confirmed cases of COVID-19 in Nunavut.

The company’s decision came after some Rankin Inlet residents used pickup trucks to block the road from their community to the Meliadine gold mine on the evening of Wednesday, March 18, with the goal of stopping Quebec-based workers from getting to the mine site.

On Thursday, March 19, Agnico Eagle decided that its Nunavut employees should return home, as had already been decided by the two other Nunavut mining companies.

All will all be off the mine sites by the end of the weekend.

Agnico Eagle workers will continue to receive their regular pay while they are off site, said the company, and they will be hired back when the pandemic crisis eases, Girard said. 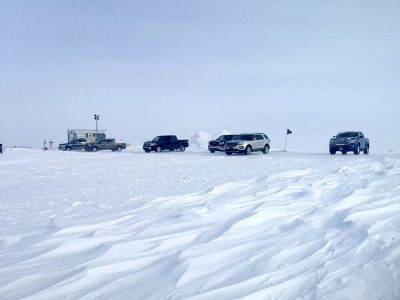 Trucks block access to the road that leads to Agnico Eagle’s Meliadine gold mine on Thursday, March 19. (Photo by Noel Kaludjak/Twitter)

The decision to send Nunavut workers back is hard, said Girard.

“We are missing them,” he said. “We are having to re-adapt because Inuit are integrated into the functioning of everything.”

Girard said he respected those who came out in their trucks to protest because “we’re in a democracy.”

For now, the company has no plans to put its mine into care and maintenance, as is the case for two other northern mines, Ekati in the Northwest Territories and Voisey’s Bay in Labrador.

“But things are moving very fast. Today as we’re speaking ‘no,’ but it could change with time,” Girard said.

For now, Towtongie said he’s leaving the decision on whether or not to keep the mine open to the professionals.

“They can’t just lock it and shutter it down. There is always going to have to be someone there anyway.”