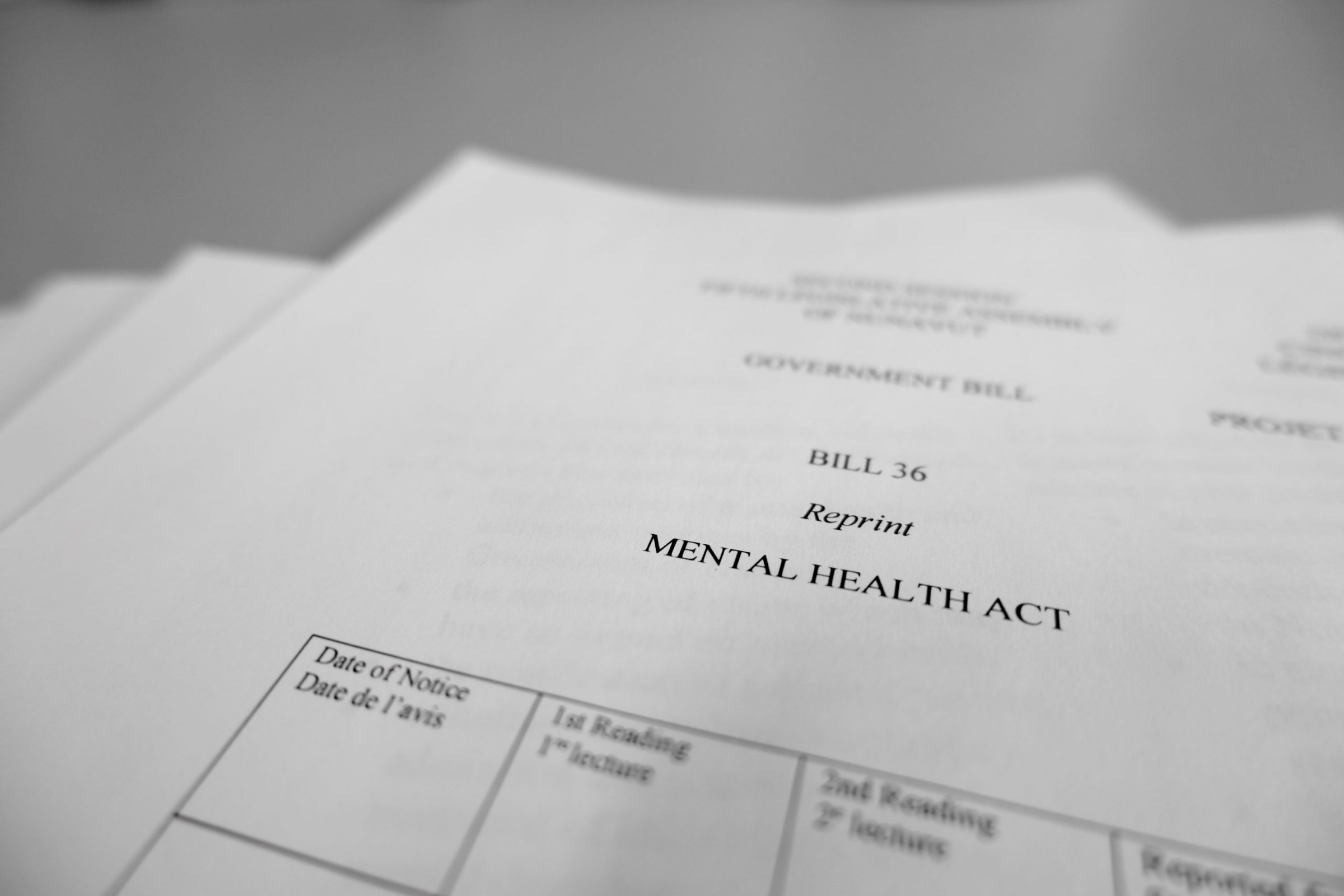 When the bill was being considered by committee of the whole on May 31, Health Minister Lorne Kusugak said the old act “does not accurately reflect the needs or realities of Nunavummiut,” as some parts were created in the 1960s.

“The new act will bring about major changes and improve Nunavut’s mental health system in many ways,” he said.

One change is a new emphasis on “postvention,” meaning support for the family and friends of victims of suicide.

Inuit in Canada suffer from one of the highest rates of suicide in the world, with the rates having increased “several-fold” during the last decades, according to a 2020 study published in the International Journal of Research and Public Health.

Between 2001 and 2016, suicide rates among Inuit were about nine times higher than in non-Indigenous peoples in Canada, according to Statistics Canada’s most recent data.

Earlier intervention by health-care professionals is another core tenet of the new act. The previous act required someone to be at imminent risk of causing bodily harm before the health-care system could go against their wishes to intervene.

“This led to situations where family members had to watch their loved one who declined care deteriorate,” Kusugak said.

With the aim of better reflecting Inuit societal values, the new act provides for greater family involvement and support “to harness their protective role in suicide prevention,” Kusugak said.

One way it sets out to do this is by appointing a tikkuaqtaujuq — or representative — to make decisions on behalf of a patient when they can’t make treatment decisions for themselves. The tikkuaqtaujuq would also be consulted throughout the patient’s care.

Health professionals will also be able to notify tikkuaqtaujuqs of suicide attempts by the person they represent.

Language rights are also included in the new law. Service providers must determine the official language — including Inuit languages in Nunavut — someone receiving treatment prefers to communicate in. If needed, an interpreter must be provided.

When John Main, MLA for Arviat North–Whale Cove, asked about language rights being respected for people being treated outside of the territory, Kusugak said the department will do “whatever is possible” to ensure they can access interpretation services.

The updated law also has provisions to allow people to get more support in their own communities.

Main asked how this will work in smaller communities that don’t have as many mental health resources.

Victoria Madsen, the acting assistant deputy minister of mental health and addictions, who was involved in drafting the bill, said they have thought about the smaller communities.

At the very minimum, she said things like making sure someone is taking their medication or doing mental health checks should be done in-community.

While the bill was being reviewed, the RCMP and the Department of Health mentioned a lack of safe holding spaces across the territory. Often someone awaiting assessment or experiencing a mental health crisis must stay in an RCMP holding cell.

In the meantime, Madsen said they are looking into converting rooms in existing health centres into safe holding spaces.

“Other things that we’re trying to do are a little bit more creative, we’re looking at even office space sometimes,” Madsen said.

Cathy Towtongie, MLA for Rankin Inlet North–Chesterfield Inlet, said “those with mental illness are often confronted and treated like criminals,” when expressing her support for the bill.

The new act commits the Government of Nunavut to creating an independent Mental Health Review Board, which will include lawyers, mental health and medical professionals, and others, like Inuit cultural advisors.

Kusugak said there is no set timeframe for that board to be established yet.

Another commitment within the act is to improve mental health and addictions programs and services, after assessing the needs within the territory.

Kusugak said he estimates it will take a bit over a year to create a strategy to do this.

In 2016, Nunavut’s action plan for suicide prevention called for increased family involvement in responding to suicide risks and attempts, as well as reviewing the old Mental Health Act.

Bill 36 was first presented in the legislature in 2019 and involved community consultations and input from elders and mental health and addiction professionals.

“This initiative has been a long time in the making,” Kusugak said on May 31.