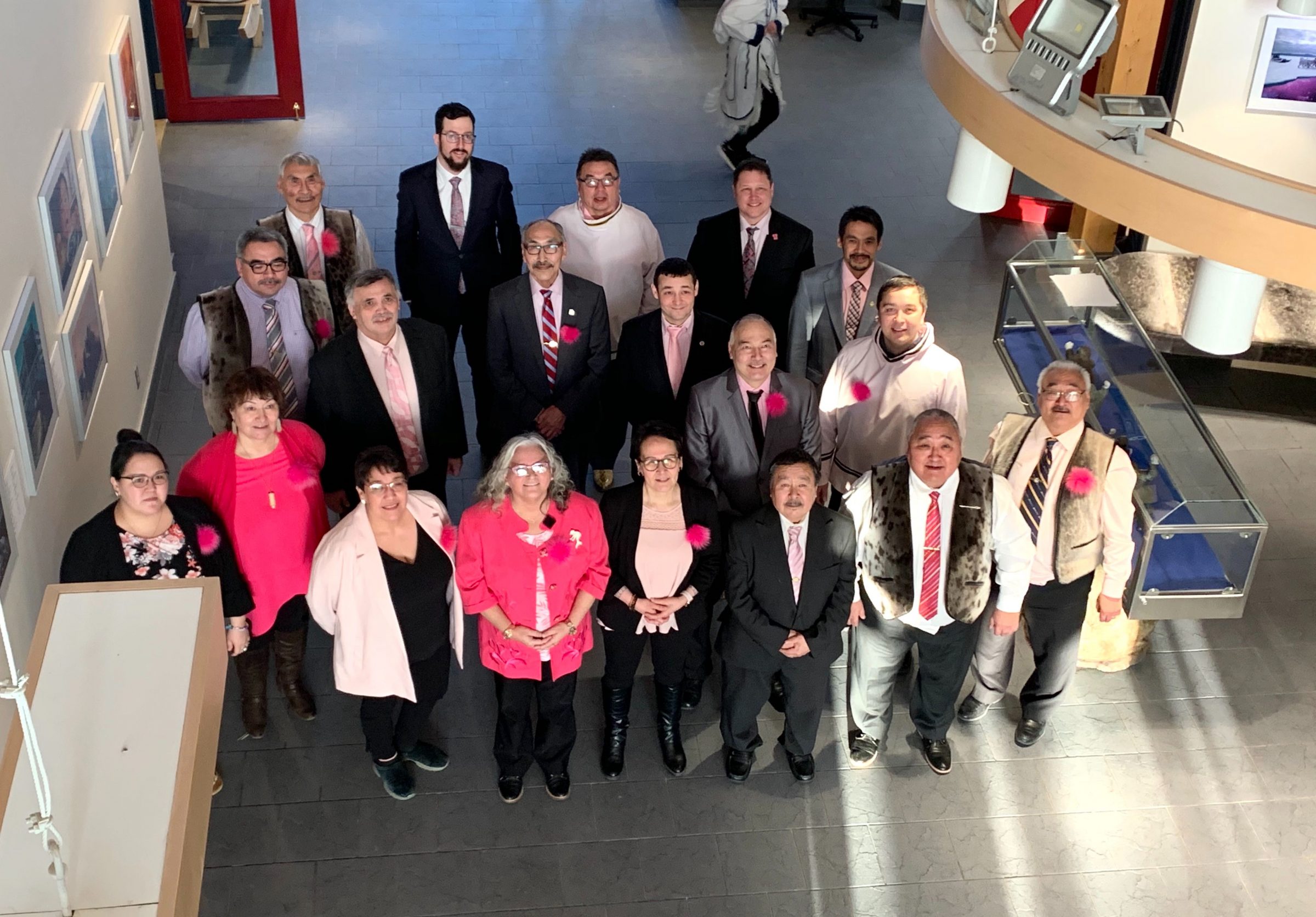 Nunavut MLAs show their support for anti-bullying initiatives on Pink Shirt Day, Feb. 26. On that day, MLAs Mila Kamingoak and John Main questioned Lorne Kusugak, minister for community and government services, about ensuring that sports in the territory are safe and inclusive. (Photo by Emma Tranter)

Nunavut’s MLAs highlighted the need to make sure sports are safe and inclusive on Wednesday, Feb. 26, which was also Pink Shirt Day, the day when anti-bullying initiatives are celebrated.

Mila Kamingoak, MLA for Kugluktuk, asked Lorne Kusugak, minister for community and government services, what steps Kusugak’s department is taking to ensure individuals involved in sports programs in the territory are made aware of how to deal with abuse and harassment of athletes.

“Your department’s proposed 2020-23 business plan indicates on page 212 that one of its priorities for [the] 2020-21 fiscal year is to develop resources to ensure sport and recreation stakeholders are prepared to address and eliminate abuse and harassment in sport.

“What specific resources are being considered?”

Kusugak said that his department is committed to working with sporting organizations across Nunavut “to do workshops with athletes and also with coaches … to talk about safe play areas, safe sport.”

Kusugak added that Community and Government Services will introduce a hotline that youth can use to report abuse in sports programs.

“There will be a hotline that athletes and participants can report to. I will keep you abreast on that development.”

Arviat North–Whale Cove MLA John Main followed up on Kamingoak’s questions, noting that the Arctic Winter Games have a policy on inclusion that borrows the following wording from the Canadian Olympic Committee: “to encourage all participants to feel welcome, accepted and respected regardless of factors such as race, family status, gender, gender identity, sexual orientation, family status, political or religious belief.”

Main asked Kusugak whether such wording would appear in the framework on sport and recreation that Community and Government Services is developing, “where we would see something like this rolled out to all the arenas, to all the gymnasiums or sport facilities across Nunavut?”

Kusugak replied, “I believe so. I think all our sporting facilities across Nunavut should be inclusive of everybody and I think it’s something that we’re definitely looking at through the framework that we’re working on.”

When asked by Kamingoak for the timeline for the new territorial framework on sport, recreation and physical activity, Kusugak said that the framework should be available for review this spring.

On the topic of Community and Government Services’ funding for sports, Main asked Kusugak, “Has the department received any feedback or enquiries from community groups regarding why there are not more girls or women playing hockey in the territory?”

Main said, “I hate to generalize for the whole territory, but the vast majority of hockey players in Nunavut are male, and female hockey is a big thing in some parts of Canada.”

Kusugak agreed that there is a growing number of female hockey players.

He then responded to Main’s question, saying, “We haven’t had any enquiries into that I think, first of all, because there is not a lot out there, but secondly, currently, they’re included in the minor hockey programs.”

Kusugak added, “I know my grandson plays here in Iqaluit and there are quite a few females involved in his age group. The number is growing.”