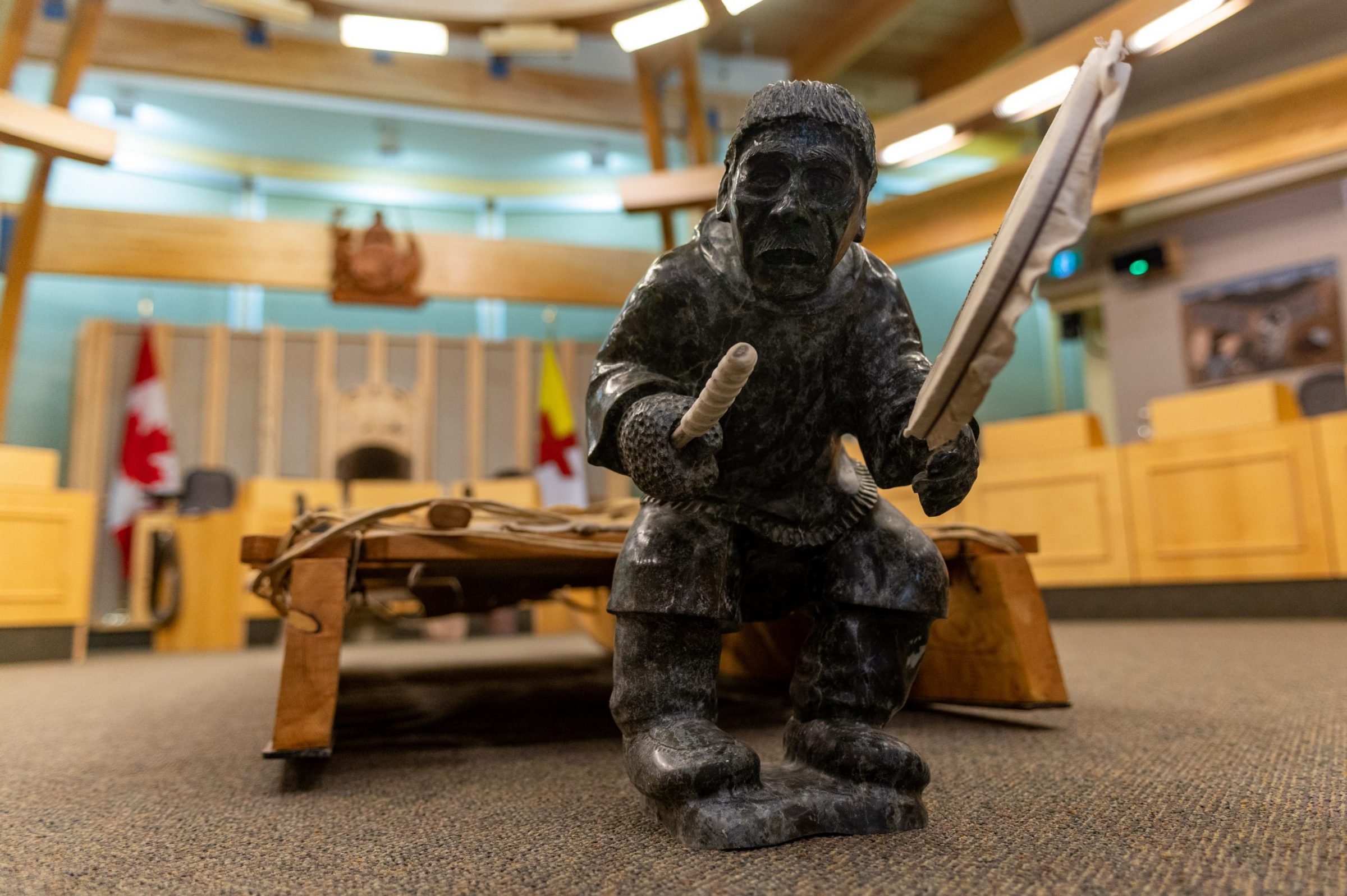 Members of Nunavut’s legislative assembly met for the first time since March to discuss and approve the territory’s pandemic-related spending and other items originally meant to be dealt with during the cancelled spring sitting. (Photo by Dustin Patar)

Nunavut’s handling of the COVID-19 pandemic dominated discussions during the recent sitting of the legislature, which wrapped up last week.

By the end of the sitting, in which MLAs wore masks and practised social distancing, the territory had two new MLAs, seven new pieces of legislation and an approved spending plan for the pandemic.

“The past year has not been easy and at times the public health measures have created hardships,” said Health Minister George Hickes on Sept. 21, the first day of the sitting.

“Nunavummiut’s health is our shared responsibility and we all have made sacrifices.”

Since the MLAs last met, nine special warrants totalling $56.7 million were approved by the commissioner of Nunavut for spending related to COVID-19. That amount needed to be approved by the members and was part of several supplementary appropriation bills, which were all passed.

Between April and July the Government of Nunavut paid over $24 million to Canadian North and Calm Air. MLAs wanted to ensure that money was being spent appropriately.

A new agreement between the government and the airlines is still a work in progress but “close,” said Hickes.

At $25 million, the budget to isolate southern construction workers drew debate from members such as John Main, MLA for Arviat North-Whale Cove.

The only funding not approved by MLAs was an additional $1.5 million for the ongoing construction of the Qikiqtani Correctional Healing Centre, an expense that was related to design errors, code compliance issues and a small change of scope.

The assembly’s gallery was closed to visitors to allow MLAs to practise social distancing, as MLAs were reminded each day when Paul Quassa, Speaker of the legislative assembly, introduced item number five, the recognition of visitors in the gallery.

“One day our visitors will be back once it’s OK,” said Quassa on Sept. 29, who offered a slight variation of the same message each day.

Although most of the pandemic-related focus was on the events of the past half-year, some concerns were expressed about the coming months.

Among those was a concern that the pandemic would have long-term implications for students whose studies have been affected.

On Sept. 22, Education Minister David Joanasie told the legislative assembly that the Financial Assistance for Nunavut Students program, otherwise known as FANS, has only seen 505 applicants. This is compared to between 680 and 750 over the past three years.

In response, Adam Lightstone, MLA for Iqaluit-Manirajak, introduced a motion that called on the Government of Nunavut to look at creating a temporary student employment program for high school graduates and other students whose opportunities have been limited as a result of the pandemic. The motion was passed unanimously.

Another of the concerns raised was how Nunavummiut who received the Canadian Emergency Response Benefit, or CERB, would return to the Department of Family Services’ income assistance program.

At the same time, Main wanted to know how ineligible CERB recipients will be affected when federal clawbacks happen during tax season.

David Akeeagok, the acting minister of family services, also expressed concern and said that there are ongoing federal, provincial and territorial meetings geared towards lessening these potential impacts.

Later in the sitting, Main asked Hickes what the expected demand for the isolation hubs would be in the future, particularly in January, as holiday travellers seek to return to the territory.

Hickes replied by saying that they expect a surge in guests but also urged residents to refrain from holiday travel to the south.

“These are different times, we have to continue to make these sacrifices,” he said.

“Not only for our own individual well-being but for our entire community and territory.”

During that time, MLAs passed and gave assent to seven bills:

On Sept. 15, prior to the start of the sitting, newly acclaimed MLAs Calvin Pedersen of Kugluktuk and Craig Simailak of Baker Lake were sworn in during a ceremony that was closed to the public and media, following Nunavut’s COVID-19 public health orders.

Aside from pandemic-related discussions, MLAs also touched on a wide variety of topics including the removal of daylight savings time, updates on polar bear populations, debate over the implementation of a Clare’s Law in the territory and the government’s choice to locate a new 24-bed continuing-care home in Cambridge Bay instead of Kugluktuk.

“There’s a lot to be encouraged by,” said Main.

On Sept. 28, Quassa announced that successful Baker Lake businessman Peter Tapatai will be the next recipient of the Order of Nunavut. The presentation will occur at a later date.

On the final day of the sitting, Sept. 29, MLAs had a chance to ask Dustin Fredlund, Nunavut’s chief electoral officer, about his office’s report on Nunavut’s last general election, one aspect of which focused on poor voter turnout.

At the conclusion of that discussion, MLAs passed a motion, introduced by Lightstone, calling for changes to the territory’s Elections Act that would require future MLA candidates to disclose their criminal records.

“I just think that voters have the right to have all the information necessary to make an informed decision,” said Lightstone.

Bill 25, An Act to Amend the Education Act and the Inuit Language Protection Act; Bill 35, the Medical Profession Act; Bill 36, the Mental Health Act; and Bill 37, the Legislation Act were all granted 120-day extensions.

The next sitting of the legislative assembly begins on Oct. 21.