“These are places where we live, fish, hunt, and seek out recreation and solace” 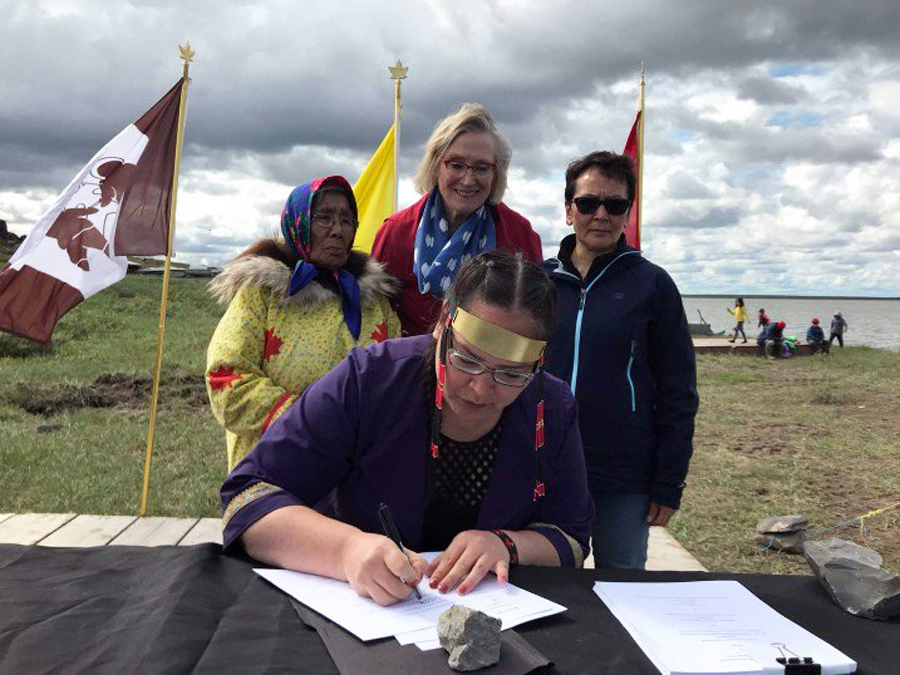 The Government of Nunavut and Nunavut Tunngavik Inc. have finally signed off on a long-debated Inuit impact and benefits agreement with the federal government over the management of a group of rivers in the territory.

That IIBA covers four Nunavut rivers:  the Kazan River (Sarvaqtuuq), the Soper River (Kuujuaq), the Thelon River (Akillinik) and the Coppermine River (Qurluktuk.) The Coppermine has been nominated and awaits official designation.

(The Soper River, called Kuujjuaq, or “Big River” in Inuktitut, runs through Katannilik Territorial Park, located between Iqaluit and Kimmirut.)

The agreement fulfills obligations set out in the Nunavut Agreement that require parties to negotiate an IIBA for any national park or conservation area established in the territory.

“These rivers have been, and continue to be, important transportation routes, particularly in the face of infrastructure deficits in Nunavut,” said NTI President Aluki Kotierk in a July 9 release.

“Through signing of this IIBA and by recognizing Inuit history, use and management of these heritage rivers, we are contributing towards implementation of the Nunavut Agreement while promoting and conserving lands and waters and maximizing benefits to Nunavut Inuit.”

The agreement also allows for the formal adoption and use of Inuit place names, Kotierk noted.

The IIBA was many years in the making; under the Nunavut land claims agreement, talks on an IIBA for Canadian Heritage Rivers were supposed to have wrapped up by 1998.

NTI officials reached an impasse with Ottawa over funding through the negotiation process, and requested a conciliator in 2014 to help mediate talks.

Under the newly signed IIBA, Ottawa will pay out $6.7 million to NTI and each of the three regional Inuit associations to carry out water quality monitoring, build Inuit cultural camps along the designated rivers and a create a fund for business opportunities in those regions.

“The Government of Nunavut is committed to working closely with our partners to ensure that Nunavummiut benefit from the Canadian Heritage River System,” said Nunavut Justice Minister Jeannie Ehaloak, who attended the July 9 signing on behalf of the GN.

“These are places where we live, fish, hunt, and seek out recreation and solace. By signing this IIBA, we are taking steps to sustainably manage Nunavut’s Heritage Rivers, so that our children, and their children may continue to enjoy the land well into the future.”

The GN has also proposed the Back River (Hanningajuq) be added to the group of heritage rivers, though further consultation with Inuit organizations will be needed first.