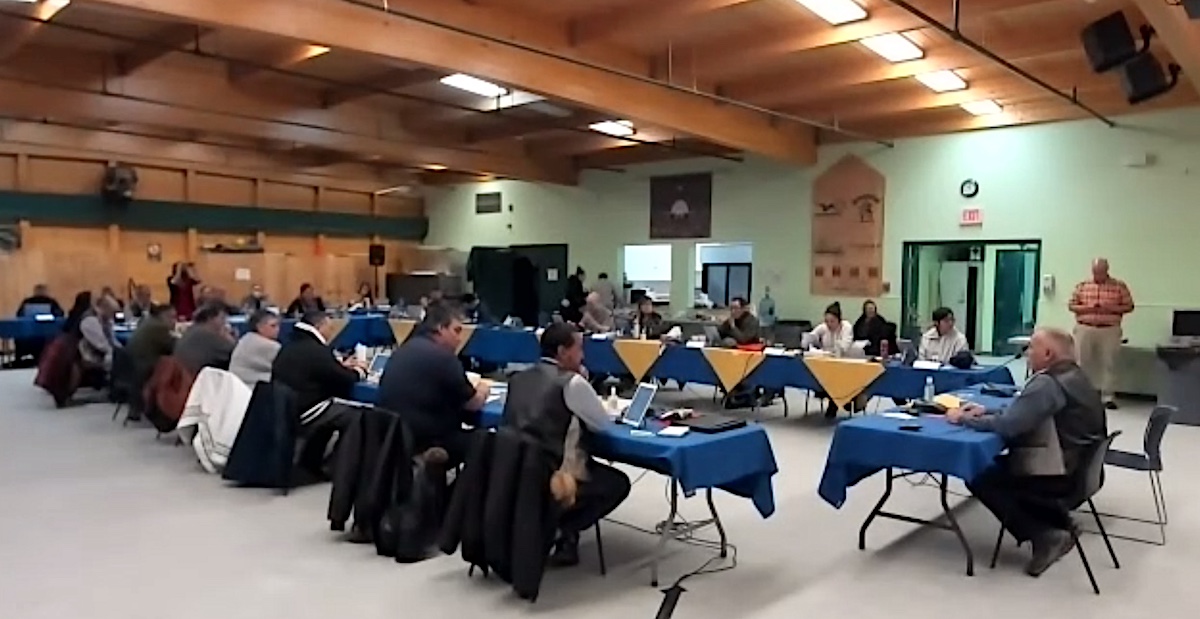 Nunavut Premier Joe Savikataaq, who is also the territory’s environment minister, got an earful from regional Inuit leaders about his government’s handling of caribou at the Nunavut Tunngavik Inc. annual general meeting in Cambridge Bay.

“Inuit are used to relying on caribou and we’re used to shooting caribou and just eating them as we need them,” Savikataaq said on Tuesday, Oct. 20.

But with Nunavut’s caribou herds in decline, “we can’t do that anymore if we want them for our future generations. And these are hard decisions,” Savikataaq said.

After he spoke to the NTI delegates from the Kitikmeot, Kivalliq and Qikiqtani regions, Savikataaq heard complaints about recent quota cuts to the caribou harvest in western Nunavut and about the sale of caribou meat between regions.

Stanley Anablak, the president of the Kitikmeot Inuit Association, said the consultations leading up to a big reduction in the total allowable harvest from the Dolphin and Union herd sidestepped his regional association.

In September, the Nunavut government limited hunting of Dolphin and Union caribou, citing a recent steep decline in the population and recommended an interim total allowable harvest of 42.

At the meeting, Anablak also said he wants the KIA and other regional Inuit associations to be involved in any wildlife issues affecting their regions and to be able to appoint members to the Nunavut Wildlife Management Board.

Savikataaq acknowledged that the consultations about the changes to the quota for the Dolphin and Union herd had been done over the phone during the pandemic. Consultations would improve in future discussions, he said.

“We’re there to work here with everyone. We want to make any wildlife decisions for the benefit for Nunavummiut and the animals,” Savikataaq said.

The Government of Nunavut is mandated to make recommendations to the NWMB, and those can be “hard,” he said.

“When I make the recommendation to the NWMB for a total allowable harvest, it’s not an easy decision because I know I am infringing on (the) Inuit ability to eat caribou when they want,” Savikataaq said.

“But we also have to think about our future Inuit … we have to do a balancing act so we can give Nunavummiut what they need and also future Nunavummiut.”

Kono Tattuinee, the president of the Kivalliq Inuit Association, proposed that local airlines start to charge Inuit who want to send caribou meat as cargo to other regions for sale because, he said, “it’s getting critical.”

These sales are “putting a strain on our culture,” Tattuinee said. “We’re teaching the wrong message about the Inuit lifestyle.”

But Savikataaq said the government can’t stop the sale of caribou meat, because Inuit have the right under the Nunavut Agreement to sell or barter what they hunt.

To change that, the Nunavut Agreement would have to be reopened, he said.

“It’s totally on NTI if the NTI board wants to suspend the sale of caribou meat,” he said.

“It is not up to the government to infringe on the beneficiaries’ rights.”

Inuit can sell caribou even when there is a hunting quota, Savikataaq said.

Right now, the Qamanirjuaq caribou herd in the Kivalliq region is the largest in the territory.

But Savikataaq said the government does not believe it can keep providing Nunavummiut with all the caribou they want.

After Savikataaq left the meeting, discussion about ways to conserve caribou continued at the AGM.

During his presentation to the AGM, NTI’s vice-president James Eetoolook recounted how he had seen photos on social media of hunters just taking the caribou fat for sale and leaving the carcasses behind.

“We know that people who want to buy meat, [but] we have to do conservation with caribou,” he said.

AGM delegates suggested limiting the trade of caribou meat between the regions and promoting more awareness training with young hunters.

The NTI AGM continues through Thursday. To tune in, you can join the webinar, using the password: NTIweb2020 You can also watch through Facebook.