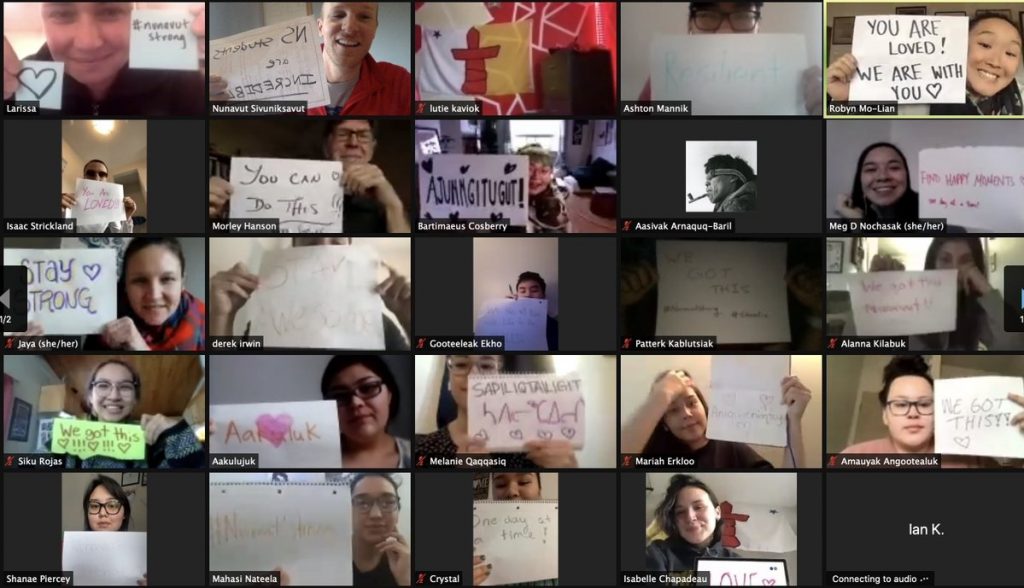 Nunavut Sivuniksavut students show their support for Nunavut during a video conference as the territory faces a COVID-19 outbreak. (Photo courtesy of NS)

The new cases bring Nunavut’s total tally of confirmed cases of COVID-19 to 84, the Government of Nunavut said in a news release. All 84 individuals are isolated and doing well, the GN said.

Whale Cove has three new cases, for a total of 11.

One new case has been identified in Arviat, bringing its total to 58.

Of the 84 people who have tested positive, most are under 30, said Nunavut’s chief public health officer, Dr. Michael Patterson.

“But before anybody reads too much into that, that’s not based on an epidemiological analysis of the data, that’s based on my foggy recollection from getting the calls overnight,” Patterson said during a news conference on Friday.

There are no changes to the number of cases in Sanikiluaq, which sits at two.

The territory’s first two cases were identified in Sanikiluaq.

“We almost certainly have containment in Sanikiluaq at this point,” said Patterson.

While cases are increasing in Rankin Inlet and Whale Cove, as well as Arviat, the only evidence of community transmission is in Arviat.

In Arviat, on top of the virus spreading between members of the same household, there have been a few people who tested positive after reporting COVID-19 symptoms, who had not been identified through contact tracing.

“That’s why we said there was community transmission happening there,” Patterson said.

It’s too early to say why COVID-19 has spread at such a high rate in Arviat compared to other communities, Patterson said.

Medical lab staff in Nunavut are working into the early hours of the morning to get test results out, Patterson said.

That workload is “sustainable for at least a little while longer,” he said.

Right now all tests are being done at labs in Rankin Inlet and Iqaluit. If the number of tests increase, samples may need to be sent to labs in the south, Patterson said.
Patterson repeated his call to cut down on contact to prevent the spread of the virus, which has affected more than 315,000 people across Canada since March. Federal public health officials warned Friday Canada could have a worst-case scenario of 60,000 new cases a day in December if Canadians increase the contact they have with each other.

Nunavut Premier Joe Savikataaq again repeated the message for Nunavummiut to limit contact with people beyond your household.

“By all means go outside,” he said. “Go hunting, go fishing, go on the land. But keep to your household if you can, otherwise keep your group small and within the five person gathering limit.”

Nunavut has been under a two-week lockdown since Wednesday—which will be in effect until Dec. 2—to help stem any further spread of infection.

At the end of the two-week period, any communities that don’t have cases of COVID-19 will be able to go back to “much less stringent public health measures,” Patterson said.

Nunavut Senator Dennis Patterson commended the work of the GN acting swiftly to contain the virus.

“Inuit are resilient people, and all northerners know how to shelter in place to avoid danger. By following the advice of our health officials and our leaders, we can get through this.”

Any resident of Nunavut who thinks they may have been exposed to COVID-19 is asked to call a dedicated hotline at 1-888-975-8601 between 10 a.m. and 6 p.m. EST or contact their local health centre by phone.

The GN posts updated information and resources for COVID-19 here.

It will continue to hold news conferences next week on Monday, Wednesday and Friday at 11 a.m. EST.