Nunavut to receive $22M in federal funding for pandemic, travel restrictions in effect

“Only go out if it’s absolutely necessary” 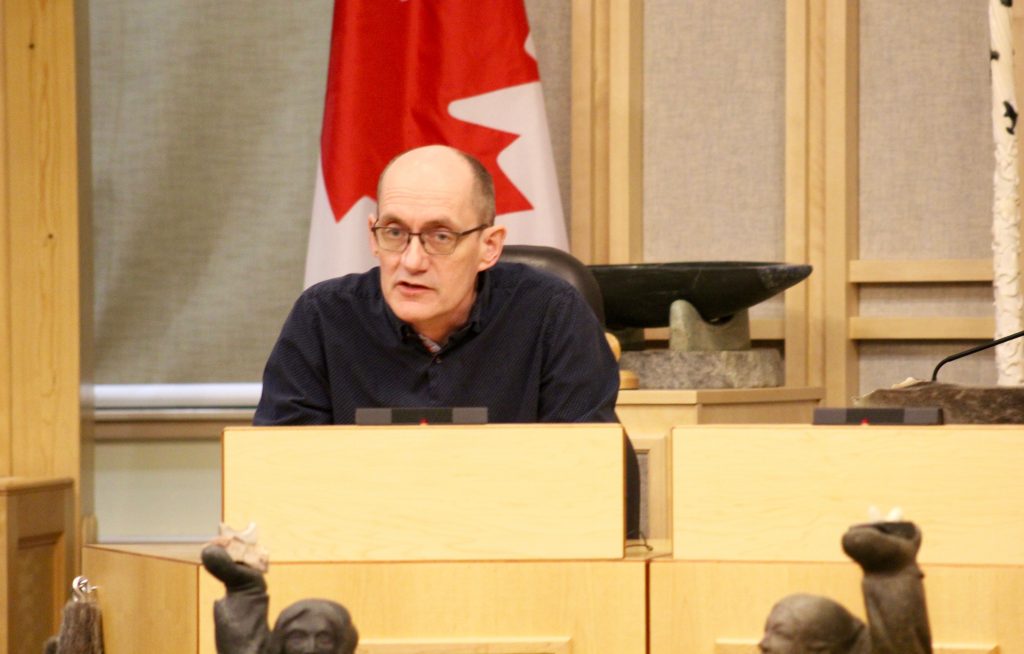 Speaking at a news conference on Tuesday, March 25, Michael Patterson, Nunavut’s chief public health officer, says Nunavut residents need to act the same way during the COVID-19 pandemic as they would during a blizzard. Travel restrictions are in effect in the territory and all public gatherings are banned. (Photo by Emma Tranter)

Nunavut residents should respond to the COVID-19 pandemic in much the same way as a blizzard, says the territory’s chief public health officer.

“Hunker down and wait it out in that same fashion. Only go out if it’s absolutely necessary. Get your groceries, come back,” Michael Patterson said at a news conference on Wednesday, March 25.

“It will be a very long blizzard, but that’s a safer way to keep us all safe from spreading the disease.”

There are still no confirmed cases of COVID-19 in the territory, and 166 people in Nunavut have been tested as of March 25, Premier Joe Savikataaq said. Fifty people have been cleared and 116 people are still in self-isolation.

The federal government also announced on March 25 that Inuit communities would receive $45 million in funding during the pandemic. Savikataaq said Nunavut will receive $22 million of that funding and is in discussions with Nunavut Tunngavik Inc. President Aluki Kotierk on how it will be distributed.

On Monday, Nunavut announced some of the strictest travel regulations in the country. Only Nunavut residents and critical workers will be allowed into the territory. Residents wishing to return must spend 14 days in isolation in hotels in Yellowknife, Ottawa, Winnipeg or Edmonton, Patterson said on Monday.

Patterson repeated that residents and critical employees must contact CPHOTravelRequests@gov.nu.ca for direction on travel and isolation.

“We do have hotels identified in all four of the cities. What we cannot have happen is a large number of people showing up at the hotels unannounced or unknown. We will not be able to ensure that Nunavummiut can return safely and efficiently if that happens,” Patterson said.

Students studying outside Nunavut must also isolate for 14 days in either Winnipeg or Ottawa before flying back into the territory.

Patterson said as of Tuesday, March 24, 71 critical workers have applied to the GN to arrange for travel back to Nunavut. The GN must approve a critical workers’ applications before they can be cleared to return to the territory.

For residents, the process is ongoing, and a team has been dedicated to responding to travellers’ emails, Patterson said.

“Our hope is that the people who applied today will have an answer within 24 hours. I cannot guarantee that we’re going to meet that goal, but we do have five or six people working on those email addresses,” he said.

Patterson said after isolating in the south for 14 days, Nunavummiut will be taken to the airport and will have minimal interaction with airport staff.

“There are mechanisms for … rerouting things so we can avoid that mingling. We realize that if you sit in a hotel for 14 days and are clear and then you happen to have bad luck passing through the airport, those 14 days are a complete waste of time.” Patterson said.

“This is part of the reason that it’s taking a bit of time to set some of these things up.”

Savikataaq said the GN has also started paying invoices to vendors immediately and has waived the regular 20-30 day waiting period for making payments.

“Retailers and business people will get paid for their services and their products sooner as the invoice will be processed immediately,” he said.

Savikataaq also repeated that all Nunavummiut, no matter where they live, need to practise social distancing.

“I’ve had questions whether people in small communities need to practise social and physical distancing. The answer is absolutely yes,” Savikataaq said.

“It doesn’t matter where you are. It’s transmittable to everyone.”