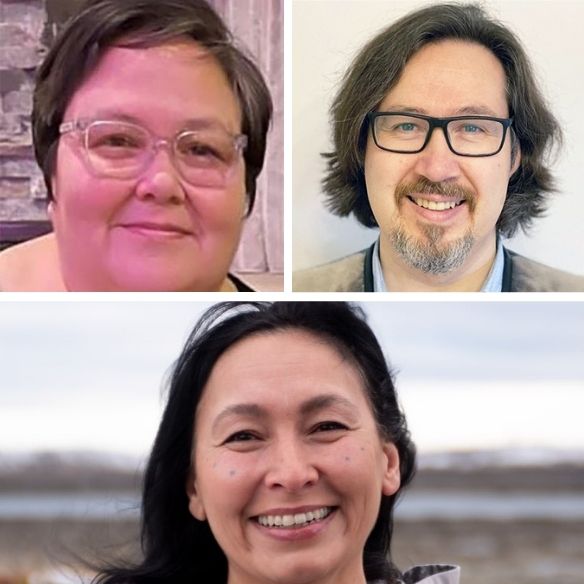 Three career public servants and policy makers are vying to represent the Iqaluit-Sinaa riding in the upcoming territorial election.

The spot belonged to Family Services Minister Elisapee Sheutiapik last term, but she announced in September that she would not be running for re-election due to personal reasons.

Now Janet Pitsiulaaq Brewster, Jeff Ungalaq Maurice and Christa Kunuk are all in the running for the seat.

Brewster, 51, is currently on leave from her deputy mayor role at Iqaluit city hall, as well as her job with the Government of Nunavut’s Health Department. She’s been with the department in various management roles for 20 years, working on policy, research and special projects.

Brewster has also been the chairperson for the Uquutaq Society and Alianait Arts Festival, and is currently on the Nunavut Black Lives Matter board.

One of the issues she wants to tackle, along with the cost of daycare and affordable housing, is community safety.

Brewster says her earliest childhood memories taught her the potential of working on these issues on a territorial level.

“I grew up in Ottawa on the laps of the negotiators for the Nunavut Land Claims Agreement and saw firsthand from the negotiators … exactly why you needed Nunavut and the potential of Nunavut,” she said.

“I’d like to use my experience and knowledge to be part of the leadership.”

Maurice, 47, said he watched the signing of the Nunavut agreement in high school, which gave him political aspirations as a youth.

Maurice is a career policy-maker, currently on leave from Nunavut Tunngavik Inc. as its director of policy and planning. Prior to his 20 years with NTI, he worked for the Department of Fisheries and Oceans, Parks Canada and Baffin Fisheries Corp.

He helped create the Nunavut Fisheries and Marine Training Consortium, which he said has a 95 per cent success rate in employing graduates in stable jobs.

“I have a really good understanding of complex policy issues as well as having developed legislation from the ground up,” Maurice said.

Kunuk, 48, is a senior policy analyst with the Department of Family Services.

She began her career as an early childhood educator at First Steps Daycare. She moved on to Embrace Life Council where she found a passion for working with young people on their mental health.

Then she joined Nakasuk Elementary School as a student councillor. After seven years, she said that she saw more barriers and gaps for youth than what she could address in that role, and took a job as a youth advocacy specialist with the Representative for Children and Youth’s Office.

Kunuk said, if elected, she wants to prioritize youth, which will help create safer homes and help Inuit heal from intergenerational trauma.

She also says she wants to see programs within the government better reach the people they are meant to serve.

“I feel like accountability needs to come back within the government. There seems to be a lot of disconnect between government and families within this territory, especially in Iqaluit-Sinaa,” she said.