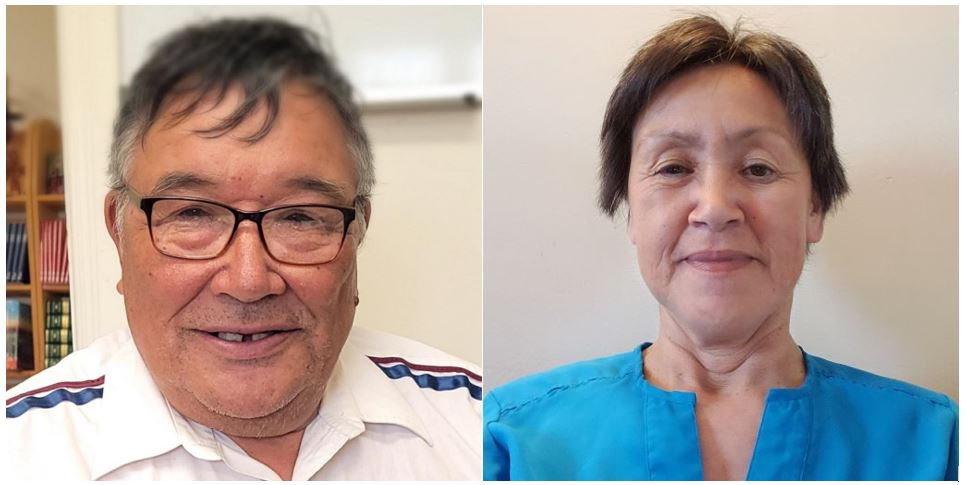 Methusalah Kunuk (left) and Joanna Quassa (right) are running for the to represent Aggu in the Nunavut legislature. (Photos from Elections Nunavut)

When veteran Nunavut politician Paul Quassa announced in August he was not seeking re-election as MLA, he expressed a desire for the future of the Aggu riding he represented.

“I thought it would be more appropriate for [Aggu] to have an MLA who lives in the community,” said the Iqaluit resident in an August interview.

Aggu is a riding in northern Nunavut that encompasses the community of Igloolik.

Methusalah Kunuk and Joanna Quassa, both originally from Igloolik, want to answer that call. Both candidates have been meeting voters and making media appearances as they vie to become the riding’s next MLA.

Kunuk, who is currently retired, is a former assistant deputy minister in Nunavut’s Department of Economic Development and Transportation. He is also a former vice-president of Baffin Fisheries.

In 2013, Kunuk ran for the legislature in Iqaluit-Niaqunnguu, finishing third. In this campaign, he said that he wants to address concerns around housing, elder care and transportation services.

“I’m trying to listen to the people [of Igloolik] and feel what they want,” Kunuk said in an interview. “I feel the community is a part of me and I need to represent them while I can.”

Joanna Quassa is the senior administrative officer in Igloolik and happens to be Paul Quassa’s sister-in-law. Previously, she was mayor of Igloolik, a teacher and worked in both the governments of Nunavut and Northwest Territories. During the 2008 territorial election, she was a candidate in Amittuq, but she lost to incumbent MLA Louis Tapardjuk.

“I think the knowledge I have in regards to GN is something that makes me eligible to do what I can do,” she said. “I think people have confidence in me … that I can help them.”

With files from David Lochead